Ethereum Price Analysis: ETH Bulls Run Out Of Steam Near $730

Ethereum bears stepped back into the market after five straight bullish sessions. Before today, the price had risen from $585 to $730, gaining around $150 for its valuation. Let’s do some technical analysis to see what’s going on behind the scenes.

The $730 line had proven itself to be a strong line of support and resistance looking into the price history. Between December 2017 and May 2018, this line had been extremely active. It seems this psychological level has come back to haunt the smart contract platform all over again.

This Tuesday’s bearish price action has forced the relative strength index (RSI) to dip down to 64.25 from the edge of the overbought zone. This shows that the asset still isn’t overpriced, and the buyers still have space to grow.

In the 4-hour chart, the MACD (moving average convergence/divergence) still shows that the market momentum is on the bullish side. Hence, we can conclude that the buyers have all the firepower they need to break past this resistance level and enter the $800 zone. This could be a brief consolidation period before buyers retake control.

Messari’s Ryan Watkins believes that in 2021, institutions will come after Ether (ETH), which could lead to a massive spike in the coin’s price. 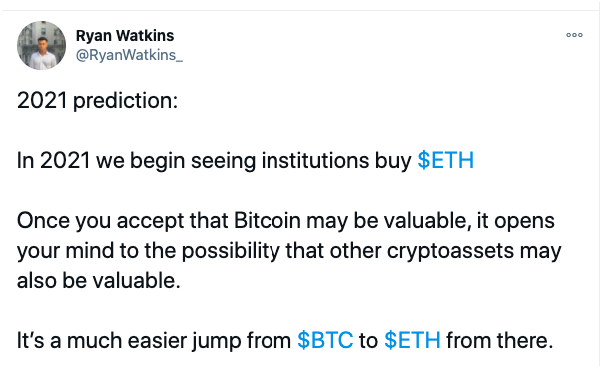 Watkins dubbed the CME Group’s recent announcement where it stated that it would launch ETH futures in February 2021, as the “writing on the wall” that institutions will commence buying the asset next year.

The buyers have a straightforward task – conquer the $730 resistance barrier and aim for the $800 zone.