The Buyers In Control Of Ethereum Price For 4 Straight Days

From June 25-June 27, the Ethereum price charted the morning start pattern. Ever since then, the bulls have been in control for four straight days as ETH went from $1,800 to $2,100 and flipped the 200-day SMA from resistance to support. Due to this jump, Ethereum has flipped the MACD from bearish to bullish, so a further jump is expected. If our bullish thesis holds, then ETH will likely flip the 20-day SMA from resistance to support soon.

Looking at IntoTheBlock’s IOMAP, we can see that the Ethereum price faces strong resistance at $2,400. Previously, at this level, over 3685,000 addresses had purchased almost 5 million ETH tokens. 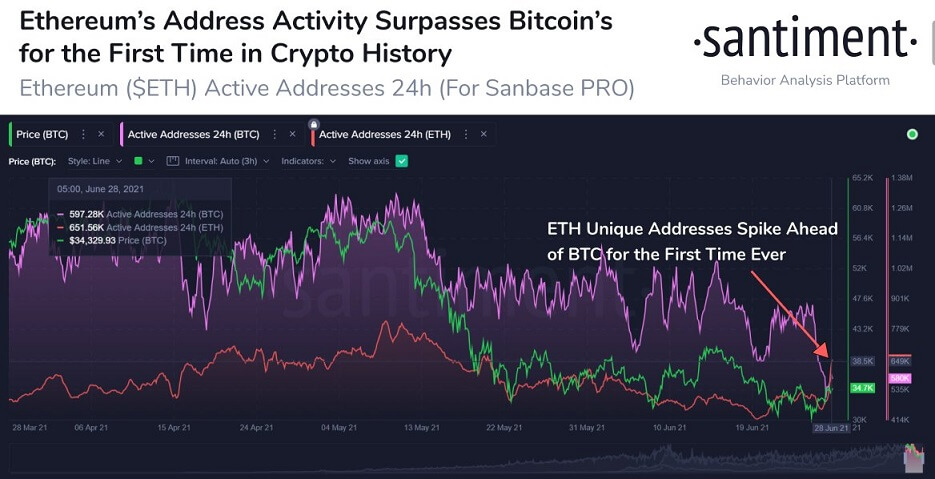 "Following up on yesterday's report on #Ethereum #FUD and the buy opportunity we saw, today has marked a historic day - For the first time in #crypto history, $ETH address activity is ABOVE $BTC address activity, as prices have soared back above $2,100."

The Ethereum network has garnered investor and developer interest because of its secure and superior functions. In a recent video, analyst Lark Davis highlighted certain aspects of Ethereum and compared them to the top online payments system Paypal to emphasize the severe undervaluation of the asset.

In just the first quarter of 2021, the network settled transactions worth $1.5 trillion, while Paypal’s total for all of 2020 was $936 billion. At the current rate, Ethereum transacts as much in a month as Paypal does in a whole year.

The chart shows the quarter-over-quarter growth of daily transaction volume on the network, underlining its growth potential in the future. Even the Bitcoin blockchain falls far behind when compared to the daily settlement volume on Ethereum. According to Money Movers, the former settles around $9.93 billion a day, while Ethereum settles over thrice that figure.

In Q1 2021, PayPal had 392 million active user accounts. While the total number of unique addresses on Ethereum was 160 million, most users have multiple accounts, so the actual number of human users could be a third of that.

However, the daily increase in users stood at 225,969. Notably, Paypal has accumulated these users since its inception in 1998. Ethereum is only six years old.

Paypal has a number of different fees for different users that can range from anywhere between 2.9% to over 4% of the transaction value. Ethereum gas fee at the time of writing was 18.76 Gwei. Even at its 2021 peak, it only amounted to $0.00069.

Moreover, Paypal as an asset class provides 0% dividends and their introduction in the future would be in the form of dollars, not Paypal stocks. However, with the launch of Ethereum staking in December last year, stakers can receive an average of 8% annual returns in ETH.

This is speculated to go up to 25% once Ethereum and Ethereum 2.0 get merged. Additionally, it has a higher value proposition as ETH rewards can be re-staked to increase their yield over the years. Even DeFi apps running on the Ethereum network offer lucrative staking rewards of over 5-10% on USDC or other assets.

The adoption of Ethereum by large financial institutions is just an added indicator of its future potential. For instance, The European Investment Bank issued $121 million worth of digital notes using Ethereum in April. More recently, the Bank of Israel has chosen the network to issue tokens that represent digital Shekels.

The buyers will need to push the Ethereum price up to the $2,400 resistance barrier. If they manage to do so, they will flip the parabolic SAR from negative to positive.