Between February 20 and February 28, the Ethereum price dropped from $1,950 and $1,400, losing over $500 in its overall valuation. On March 1, ETH managed to improve to $1,570. Following that, the buyers and sellers have been playing a tug-of-war over control of the Ethereum price.

This Friday, the bears managed to flip the $1,500 line from support to resistance, as the Ethereum price fell for two straight days. The relative strength index (RSI), is trending horizontally around 42.60, which shows that the sellers can drop ETH even more if they choose to do so.

As per the IOMAP, there is a healthy support wall at $1,450. Previously, at this level,  237,000 addresses had purchased a whopping 7.25 million ETH tokens. This level is strong enough to absorb a lot of selling pressure.

Mark Cuban, a billionaire investor and Shark Tank star, appears to have changed his stance on crypto much like the other stars of the TV show. He recently told Bitcoin critic Peter Schiff that gold is dying as a store of value at the hands of the cryptocurrencies such as Bitcoin and Ethereum.

Schiff recently took to Twitter to bash crypto, saying he was surprised that “smart investors” on Wall Street were “dumb enough” to buy into Bitcoin and other virtual assets. To this, Cuban responded by offering “help” in explaining the charm behind the emerging technology. In his opinion, gold is dying as a store of value because it cannot adapt and address the current (or future) needs of society. However, Bitcoin and Ethereum can. 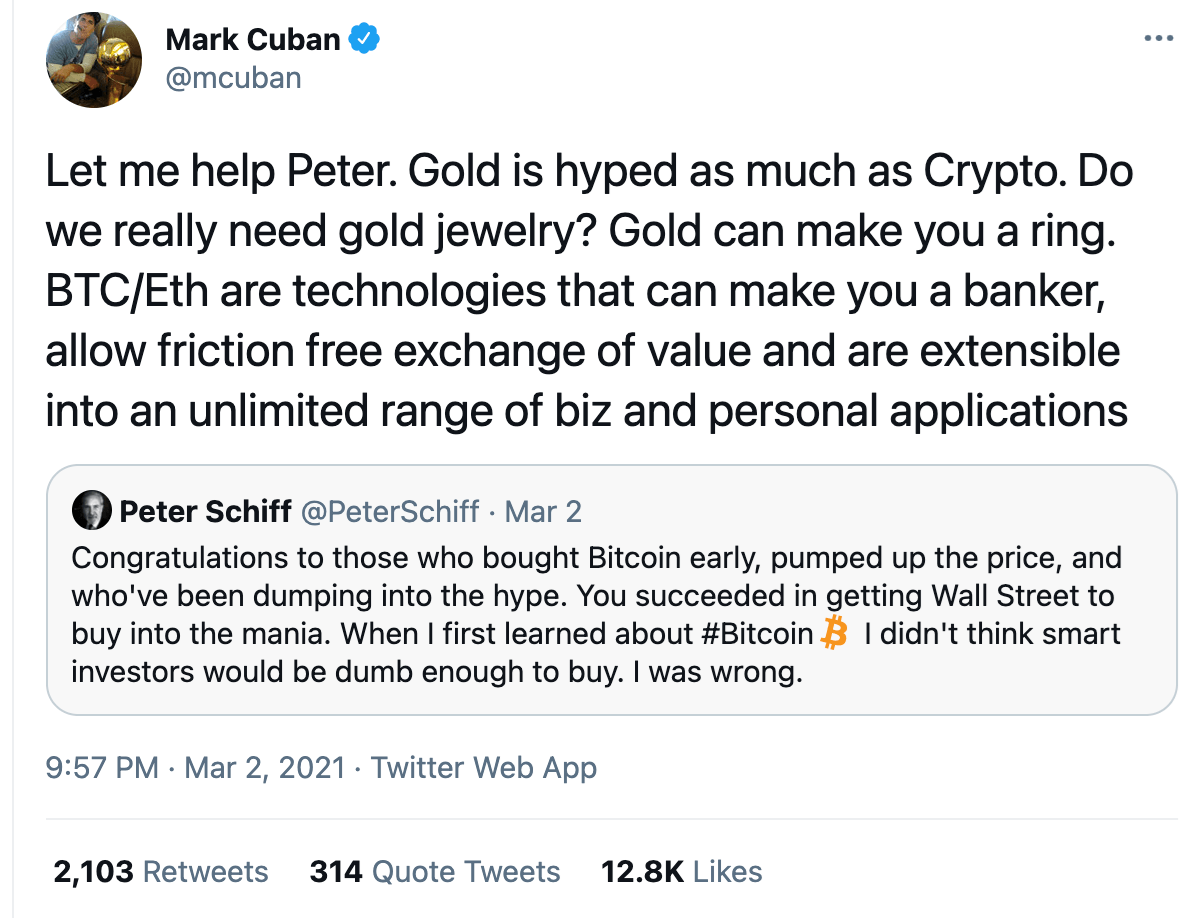 Cuban said that the present use cases for crypto are just “proof-of-concept” and advances will change the asset class in the future. Meanwhile, gold will always remain exactly the same. According to an earlier report, Shark Tank’s Kevin O’Leary has moved a portion of his portfolio into Bitcoin and Ethereum recently.

After rolling out a Bitcoin exchange-traded fund, Evolve ETF, a Canadian firm, is now looking to launch an Ethereum-based ETF. In a recent press release, the firm said:

Ether is the building block for a revolution in digital finance which is still in its infancy. All ether transactions are recorded on the Ethereum computer network, which is a decentralized, open source blockchain featuring smart contract functionality. Ethereum is the most actively used blockchain with ether being used to pay for transaction fees and computation services.

Due to its capabilities with smart contracts, the Ethereum network is largely considered a stronger blockchain than Bitcoin. Many devs utilize Ethereum for building new decentralized apps (dapps) and coins. This has led to heavy traffic congestion and high fees in the past. Ethereum co-founder Vitalik Buterin had earlier said that Ethereum was no longer scalable, though the release of Ethereum 2.0 is likely to eliminate this problem.

As a leader in disruptive innovation, we look forward to providing Canadian investors with access to another leading cryptocurrency through an ETF structure. Cryptocurrencies are fundamentally transforming digital finance and Evolve is quickly establishing itself as a leading facilitator for investing in this space. Ether is a digital asset that is not issued by any government, bank or central organization and was intended to complement rather than compete with bitcoin.

Right now, the Ethereum ETF is in its early filing stage and hasn’t received any approval. However, the move is leading many investors and traders to feel confident that developed nations such as the US will soon follow suit and unveil similar products.

Ethereum Price Is Expected TO Reach These Levels

As of now, it looks like the Ethereum price sentiment is pretty negative. As such, this shows that ETH will likely drop to the $1,450 support wall. However, we don’t see ETH dropping any further below this line.