Ethereum Price Analysis: ETH Falls By Over 10% After Bearish Start To The Week

Ethereum endured a fairly bearish end to August after falling below the 20-day SMA on 26th August. However, the price recovered the very next session to close above the 20-day SMA at $3275. The next few sessions did not see much movement, and with the 20-day SMA acting as support, the price did not fall below $3200. However, on 31st August, ETH rose by over 6% to settle at $3432 and carried forward the momentum into the next session, rising further by over 11% to close at $3830. ETH tried to get past $4000 in the subsequent sessions but could not go past the level, with the resistance pushing the price back down.

The Ethereum price fell marginally on Saturday but recovered on Sunday. However, after another static session where the price did not move much, ETH started the current session on an extremely bearish note. Sellers took control of the session and pushed Ethereum, first below $3750 and further below to $3500. With the 20-day SMA acting as support, we could possibly see the price stabilize at this level or fall even further to around $3100. 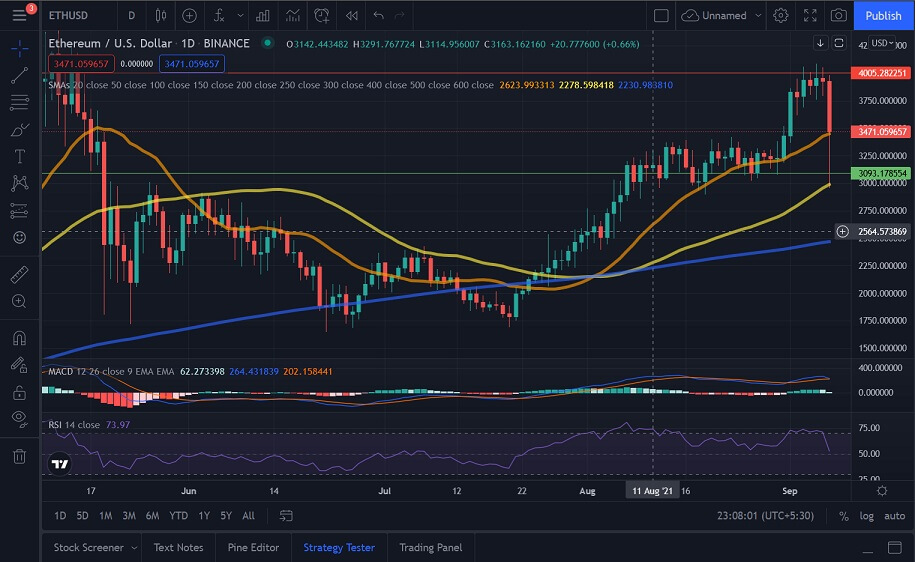 Looking at the 1-day Ethereum price chart, we can see that the 20-day SMA is currently acting as support, and we could see the price stabilize at this level. Looking at the RSI, we can see that it had risen above the neutral zone on 1st September when Ethereum had risen by almost 12%. This could have played a role in Ethereum’s failure to push [ast the $4000 level. The RSI went back into the neutral zone after the current session, which has seen ETH fall from $3928 to below $3500. The MACD, while still bullish, could flip into bearish if ETH falls below the 20-day SMA.

Looking at IntoTheBlock’s IOMAP, we can see that Ethereum has strong support at around $3400, at which level 0ver 380,000 addresses bought over 8 Million ETH. We could see the price stabilize at around this level.

Looking at the 4-hour price chart, we can see that there is resistance at $4000, and the 20-bar SMA acting as support. However, ETH fell below the 20-bar SMA and then further to slip below the 50-bar SMA as well. The current session is also bearish, and we could see ETH fall down to the 200-bar SMA before stabilizing. The MACD has also been bearish for the last couple of days. However, looking at the RSI, we can see that it has slipped below the neutral zone, indicating that ETH could be undervalued. This could be an indication that the ETH price could rebound once it finds a level of support. 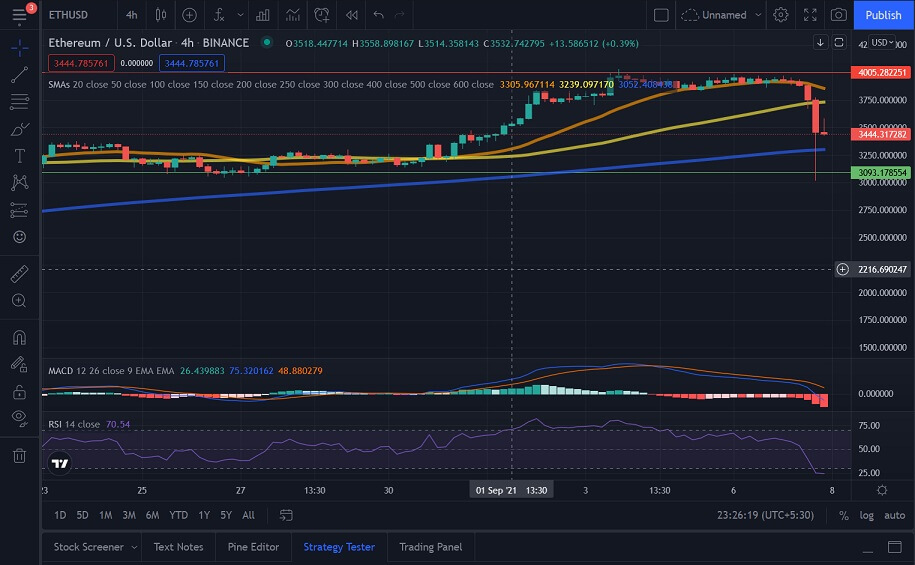 Crypto strategist and trader Nicholas Merten recently predicted a parabolic rally for Ether in the coming months as the crypto asset continues to flash signs of strength.

Merten noted ETH surged over 400% recently. According to him, the leading smart contract platform looks poised to follow its 2017 bull run.

“Ethereum’s still holding around its midline here, showing that it’s probably going to – just like it did back here in 2017 – formulate and set the stage here to continue climbing higher towards a much bigger even level."

Merten also looked at Ether against Bitcoin (ETH/BTC), which he said has more to grow to reach its all-time high of 0.15 BTC.

“Since the lows, we’ve really made a nice rebound back here (0.055 BTC or $2,844) and look like we’re revisiting back relatively close to the previous relative highs of this cycle, which is again signaling further that you have the cupping price action that scoops back up, and we start to pick up the momentum…

You can see here that we’ve still got ways to go comparative to where we were back here in June of 2017 or here in February of 2018.”