Ever since August 7, the Ethereum price has found major resistance at the $3,150 line and struggled to close a session above that. Do note that, according to the relative strength index (RSI), ETH was slightly overpriced. This could have stopped the buyers from taking control of the market. Anyway, this Thursday, Ethereum dropped to $3,030 and pushed RSI into the neutral zone.

Ethereum Price Climbing Up Since July 21

Looking at IntoTheBlock’s IOMAP, the Ethereum price has crucial support at $3,000. Previously, at this level, almost 365,000 addresses had purchased over 922,000 ETH tokens. 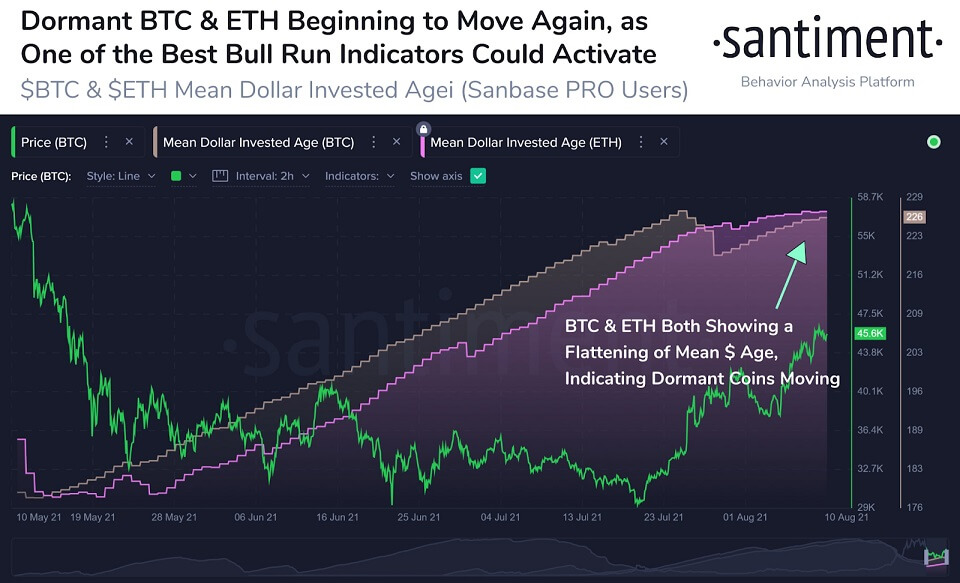 "One of the key indicators we look to as a sign that a ranging or #bearish period is coming to an end in Mean Dollar Invested Age. We're seeing that the average age of dollars for both $BTC & $ETH is no longer rising as dormant investments are moving!"

Ethereum's London hard fork, a long-awaited network upgrade that included a measure to reduce the supply growth of ETH, went live last week. Since the hard fork, over $100 million in ETH has been burned or taken out of circulation. This has helped ETH surge in price too.

The London upgrade featured five code changes, but the most discussed was EIP-1559. The "Ethereum Improvement Proposal" altered the transaction fee structure for the network. Instead of fees going directly to the miners that validate transactions, a base fee would go to the network and promptly be destroyed.

While EIP-1559 was also a way of improving user experience by automating transaction prices and taking the guesswork out of an opaque auction process, it has had the effect of stoking demand by reducing supply.

Whereas Bitcoin was created with a 21 million BTC supply limit, Ethereum has no such ceiling. EIP-1559 inserts deflationary pressure. With each new block of transactions added to the chain, new ETH is created. The ETH then goes to a miner as a reward, but some ETH is removed via fees.

According to the website ultrasound.money, around 31,000 ETH has already been destroyed. At current rates, that's a little over $100 million. Over 10% of the burned fees have come via transactions on the NFT marketplace OpenSea, where people can sell or bid on digital collectibles and art. Decentralized exchange Uniswap and blockchain-based game Axie Infinity rank second and third in terms of burn rate.

Those who like to feel the burn will likely look forward to Ethereum's pending move from a proof-of-work consensus algorithm to a minerless, proof-of-stake network. Due to Ethereum 2.0's structure, the total supply of ETH may even decrease as more fees are burned than will be created.

The buyers must bounce Ethereum price up from the $3,000 support wall and attempt to reconquer the $3,150 resistance line.