Ethereum Price Analysis: ETH On A Tear As It Nears $1,200

Following a bearish Monday, Ethereum bulls have managed to completely retake control over the last two days. As of now, the price is comfortably trending above the $1,100 psychological level ($1,125).

When reading the 4-hour price chart, one can see that Ethereum has not only conquered the $1,040 line, which had repeatedly thwarted the price. Along with that, the MACD shows sustained buyer momentum, while the parabolic SAR has reversed from bearish to bullish.

While looking at the daily chart, one can see that the smart contract platform leader aims for the $1,200 psychological level. The chart flashed a sell signal in the form of a green-nine candlestick in the TD sequential indicator. However, the bulls have well and truly returned following a brief correction.

When we see IntoTheBlock’s In/Out of the Money Around Price (IOMAP), we see a lack of substantial resistance barriers upfront. There is a somewhat moderate resistance at $1,200, but the buyers should have enough momentum to overcome it quickly.

Adding further credence to our overall bullish outlook is this graph by Santiment. 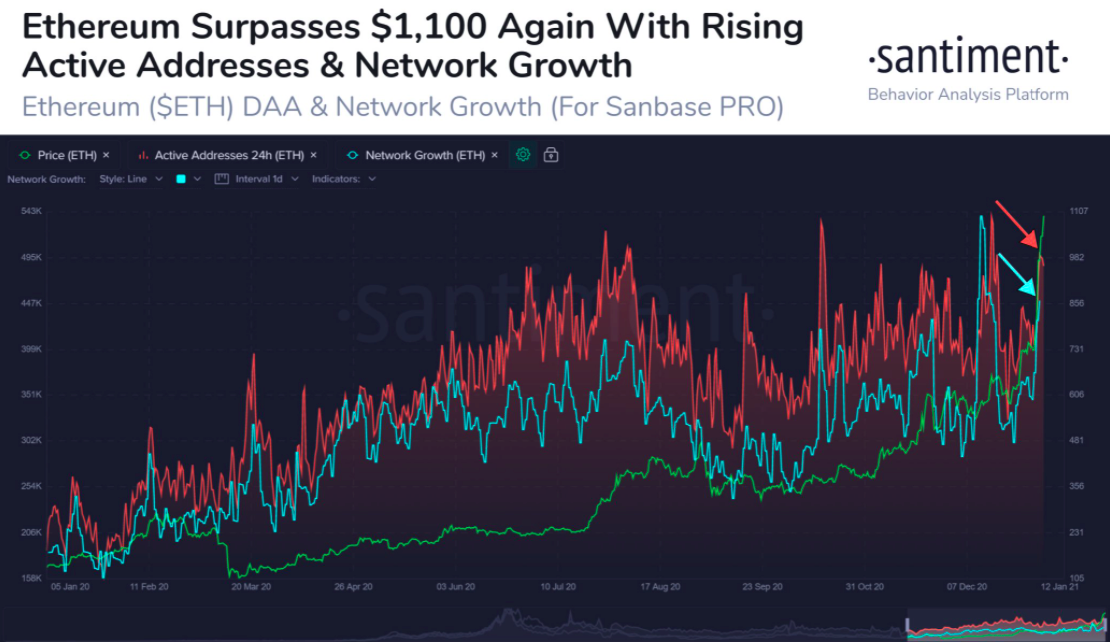 The on-chain analytics platform tweeted the image and said:

“#Ethereum has jumped back over the $1,100 mark for the third time in three days, and both address activity and network growth for the #2 market cap #crypto asset continue to sit in a good place”

Ether (ETH) surged past the $1000 mark recently. However, it soon retreated sharply following Bitcoin as the CME gap closed, resulting in a 10% correction for BTC. ETH fell back to $850 but did not stay there for long. 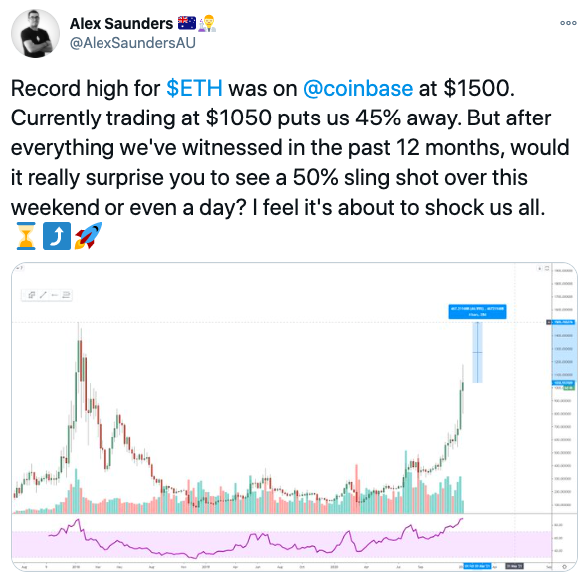 Other analysts and experts have suggested that the real monetary fundamentals for Ethereum are yet to kick in. Additionally, one metric is also suggesting that the asset has further to go. According to a Glassnode Insights report, Ether spent less than one month in the four-figure territory before entering the bear market that lasted two and a half years.

On-chain signals suggest that we are still in the earlier stages of a bull market, relative to the same price levels in 2018.

The report analyzed the Market Value to Realized Value (MVRV) ratio, which is the relationship between market capitalization and realized capitalization. The metric indicated when the traded price is below a “fair value.”

Glassnode stated that the MVRV ratio is still extremely low relative to early 2018 when the price was equivalent to the current levels. When the ratio was this low previously, in the lead-up to the 2017 bull run, ETH prices were still below $25.

This indicates that in the current market, there is room for significant further growth before ETH becomes overvalued.

According to an analysis provided by analyst Jebb McAfee, Ethereum bulls must prepare for a price rally towards $2,000 soon. McAfee considered many upside fundamentals (such as Ethereum’s growth as a decentralized application server and its rising search volumes on Google) before going bullish on the asset.

McAfee added that Bitcoin is the primary catalyst behind ETH’s potential bull run ahead. He cited how a drop in the top cryptocurrency’s market capitalization in December 2017 paved the way for ETH/USD to establish an all-time high of $1,419.

The analyst hinted that the pair’s reactive rally was party psychological. A massive upside move in the Bitcoin market encouraged traders to explore the next-best digital asset. Ethereum benefited from it majorly in December 2017 and he expects the fundamental fractal to repeat in 2021.

I believe Bitcoin going through a massive rally is building trust among the investors in a bull market. And that trust is going to flow over [into Ethereum] and its rally itself.

The statement appeared as Ether underwent a massive upside push. The cryptocurrency surged almost 60% in just three days of trading as the Bitcoin dominance corrected lower.

The most crucial level to watch for the bulls is the $1,200 psychological zone. On the downside, there is a strong support barrier at $1,040, wherein previously over 500,000 addresses had purchased 2.75 million ETH tokens. This level should be robust enough to absorb any selling pressure.