ETH has had a bearish day after a hattrick of extremely bullish days. However, the overall sentiment surrounding the Ethereum price is positive. 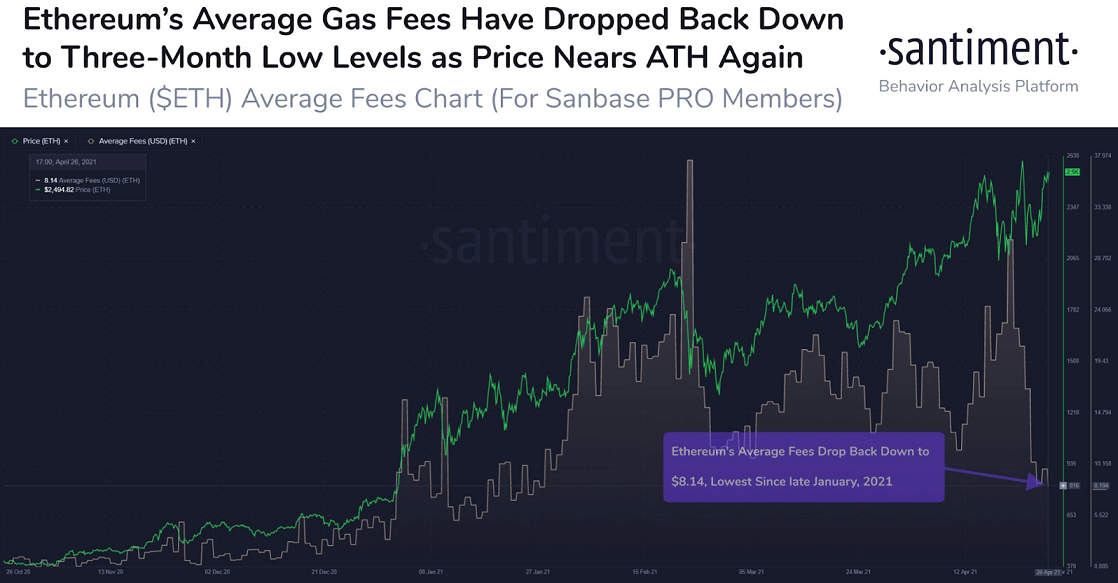 “#Ethereum average gas fees are back at sub-$10 levels, and $8.14 is the lowest average cost in three months. This is obviously encouraging, with $ETH holders being able to confidently move their holdings without fear of such heavy incurred costs.”

A recent correction in the cryptocurrency market led many investors to panic and sell their previous investments. However, negative investor attitudes generally provide other investors with an opportunity to profit. Large “whale” investors appear to have taken advantage of the uncertainty to buy Ether at a discount.

Ethereum’s supply distribution chart reveals that the number of addresses with 10,000 to 1,000,000 ETH surged by 0.70% over the past week. Roughly nine whales joined the network within that period.

The growing number of whales may seem insignificant initially. However, when considering that high-net-worth individuals hold between $25 million and $2.5 billion in ETH, the sudden spike in buying pressure can translate into billions of dollars.

IntoTheBlock’s In/Out of the Money Around Price (IOMAP) model revealed that ETH is currently trading above stable support. Based on transaction history, over 200,000 addresses previously purchased nearly 10,000,000 ETH between $2,270 and $2,300.

This massive demand barrier could absorb any further downward pressure, as holders within it may do anything to prevent seeing their investments going “Out of the Money.” As long as the $2,270-$2,300 support zone holds, Ether will likely rise toward the resistance level of $3,000.

The buyers have the license to aim for the $2,800 psychological level.