Ethereum Price Analysis: ETH recovers, could be a brief respite from devastating drop

After failing at the $615 resistance line, the price of Ethereum has been on a steady downtrend. The bulls managed to stage a comeback this Wednesday, pushing the price up to $575. The four-hour chart for Ethereum shows that the smart contract platform could be in the middle bullish resurgence. However, this rise in price could be nothing more than a brief respite as the daily price chart still remains bearish.

First up, let’s look at the 4-hour price chart. The price broke below the $590 line and dropped steeply to the $540 support wall. ETH then managed to rebound off it in a V-formation as the buyers began their price recovery.

Currently, the ETH is facing stiff resistance at the 20-bar SMA and has already been rejected once. If the price manages to recover, the buyers will want to ride the momentum and regain the critical $540 line.

The price target of this inverted pattern is down at $420. The MACD in this timeframe shows that the market momentum is overwhelmingly bearish, which adds further credence to our negative hypothesis.

Despite the bearish price, the participation and overall hype around the Ethereum 2.0 upgrade is pretty high.

Ethereum 2.0 went live just a few days back. The total deposit on Ethereum 2.0 staking contract quickly surpassed one million ETH, according to a Finance Magnates report. Ethereum initially had outlined the need for 524,288 ETH for the launch of Beacon Chain. 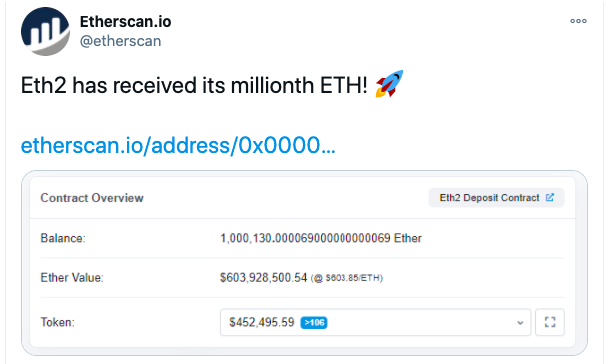 The ETH community displayed generous support and staked around 900,000 at the start of last week. According to the staking contract, there is no closing date for the contract. So, the ETH community can earn rewards on staking even after the next phases. Early stakers have the advantage of high rewards, which can go up to 20% per annum.

Currently, the community members are actively participating in staking because the staking reward will drop with the joining of more validators in the future. With the Beacon Chain launch, the Ethereum network started its transition from the current proof-of-work network to a more efficient proof-of-stake network. The recent launch of phase 0 is just the first step. The entire transition will take years to complete.

The Beacon Chain will play an essential role in the new blockchain network to compete with behemoths like Visa and PayPal. With more than one million Ethereum staked at the network, the Ethereum community is looking forward to a smooth transition process.

Investment giant GrayScale has recently announced that it has acquired yet another 100,000 ETH. According to a Trustnodes report, GrayScale said:

Since the sales reported on the most recently filed Current Report on Form 8-K by Grayscale Ethereum Trust (ETH) (the “Trust”), the Trust issued 1,140,900 Shares at varying prices determined by reference to its Digital Asset Holdings per Share to selected “accredited investors,” within the meaning of Rule 501 of Regulation D under the Securities Act of 1933, as amended (the “Securities Act”), in private placement transactions exempt from the registration requirements of the Securities Act pursuant to Rule 506(c) thereunder for an aggregate of 105,927.51301273 Ethereum representing $62,975,646.

Genesis Global Trading, a brokerage firm, acted as the Authorized Participant for these distributions. GrayScale last filed the report a week ago, indicating that it has sold 100,000 ETH this week, up from 78,229.44246893 ETH a few days back. The company appears to have three million ETH issued and ready to be purchased, making it one of ETH's largest custodians.

The Grayscale Ethereum Trust (ETHE) was launched in 2013 and is limited to accredited investors. GrayScale alone manages over $12 billion in assets and growing since it is the only way to invest in stock in the USA’s form of ETH and BTC.

In the 4-hour time-frame, the investors need to watch the 20-bar SMA ($575). Our short term bullish hypothesis is completely dependent on ETH overcoming this level.

In the daily chart, the key level to watch out for is the 50-day SMA ($490). This is the only support level strong enough to stem the flow if our Adam and Eve pattern is validated.