This Monday, the Ethereum price jumped up to $2,400, as the buyers took full control of the market. However, ETH soon ran out of steam and retreated to $2,225 to close out the day. Prior to that, ETH dropped from $2,325 to $1,775 between July 7 and July 20. During the drop, ETH flipped the 20-day and 200-day SMAs from support to resistance and reversed the parabolic SAR from positive to negative.

Ethereum price had seven straight bullish sessions between July 21 and July 27, wherein it jumped from $1,780 to $2,240 and is currently looking to break the $2,250 resistance barrier. During this jump, ETH managed to flip the 20-day, 50-day, and 200-day SMAs from resistance to support. Along with that both the MACD and parabolic SAR indicates positive market sentiment.

Looking at IntoTheBlock’s IOMAP, the Ethereum price faces immediate resistance at $2,250. Previously, at this level, almost 570,000 addresses had purchased over 3.15 million ETH tokens.

Whales ETH Balance Has Fallen To Its Lowest Volume Since 2015: Santiment

By the end of last week, 21.3 million coins were under the control of such major players. Whales currently control more than 20% of ETH of the total altcoin supply, the researchers stressed. But on the other hand, due to aggressive accumulation, the volume of Ether placed by whales in exchange wallets on their side has fallen to its lowest level since 2015 (4.66 million ETH). 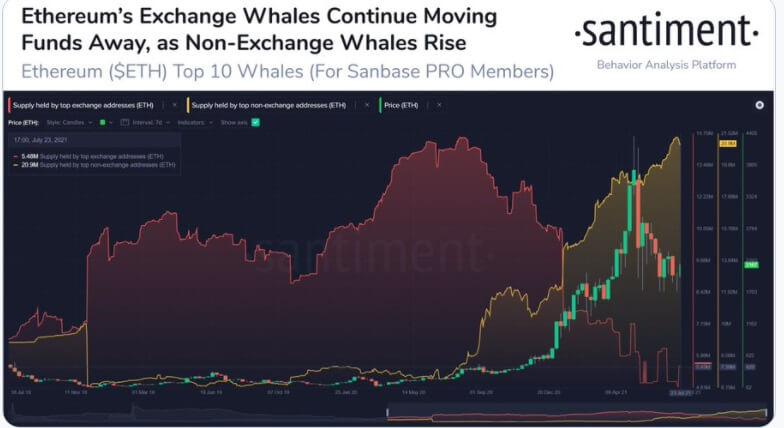 "#Ethereum's top 10 non-exchange whales are adding on to their holdings, as their 21.3M $ETH held this week established a new 5-year high. Meanwhile, top 10 exchange whales recently hit a low of 4.66M $ETH, the lowest since ETH's 2015 inauguration."

Notably, the ETH outflow trend, which has dominated for several weeks in a row, led to a rise in the price of the altcoin. It is worth adding that as early as last week, the Santiment team drew attention to another surge in the activity of the so-called "Ethereum whales."

Large investors have been buying the drop since the beginning of the summer. According to the most recent data, wallets containing between 10,000 and one million ETH have accumulated a total of 60.52 million coins.

If the Ethereum price breaks past the $2,250 resistance barrier, the IOMAP tells us that ETH will reach $2,400 with ease.