The Ethereum price crashed from $4,200 to $2,088, losing almost 50% in its overall valuation between May 12 and May 23. During this downward surge, ETH managed to flip the 20-day and 50-day SMAs from support to resistance. After flashing the buy signal in the form of a red-nine candlestick in the TD sequential detector, the bulls took charge this Monday and pushed ETH up to $2,665.

Ethereum Price Drops After Meeting Resistance At The 50-day SMA

This Tuesday, the Ethereum price tried to break above the 50-day SMA but failed and dropped to $2,595. The MACD shows, the overall market momentum is still very bearish, soa  further drop could be possible,

Looking at IntoTheBlock’s IOMAP, Ethereum price has a robust support at $2,300. Previously, at this level, over 285,000 addresses had purchased almost 7 million ETH tokens.

Is Ethereum the “rails for the new capital markets?

The European Investment Bank earlier issued a $100 million two-year bond on Ethereum. The bond issuance shows Ethereum is the “rails for the new capital markets,” according to Seamus Donoghue, Vice President of Metaco.

In the DeFi era, bond issuance on the blockchain via tokenization often gets forgotten. However, the $280 trillion bond market, with its relative safety and stability, has been a critical backstop for many investment portfolios because their digitization is key to making digital assets go mainstream.

According to a Blockworks report, Donoghue said:

The EIB issuance wasn’t on one of the permission chains. It’s really obvious the market’s looked past that. And also these participants looked past that and went to where the liquidity was, which is on the public blockchains. The point is they need to have an interoperable sort of framework so that they can raise money on a public chain where there’s demand and liquidity.

Donoghue said that Ethereum is enabling the ability to put the entire capital markets on the blockchain in a trustless, decentralized, and distributed framework, but the future isn’t exclusively tied to it.

Panelists on an earlier Blockworks webinar viewed the future of programmable money as a “multi-chain future” with Ethereum at the center, supported by other interoperable protocols. Similar to this, Donoghue said that his institutional financial clients want interoperability.

We deal with banks and their focus is not on a single channel. Ethereum is definitely the dominant one, but the view is it could be on Tezos, it could be on Polkadot. We even see interest in tokenization on the Stellar blockchain.

In a recent earnings call, Singapore’s DBS bank identified it as an area they are doubling down on in the future after the success of Azalea Investment Management Temasek private-equity-backed bond Astrea VI on the city’s iSTOX digital asset exchange. Donoghue said that many of them will be for public debt.

If you’ve seen the amount of government debt that’s been issued of late, it’s a growth industry.

Ethereum Gas Usage On The Rise 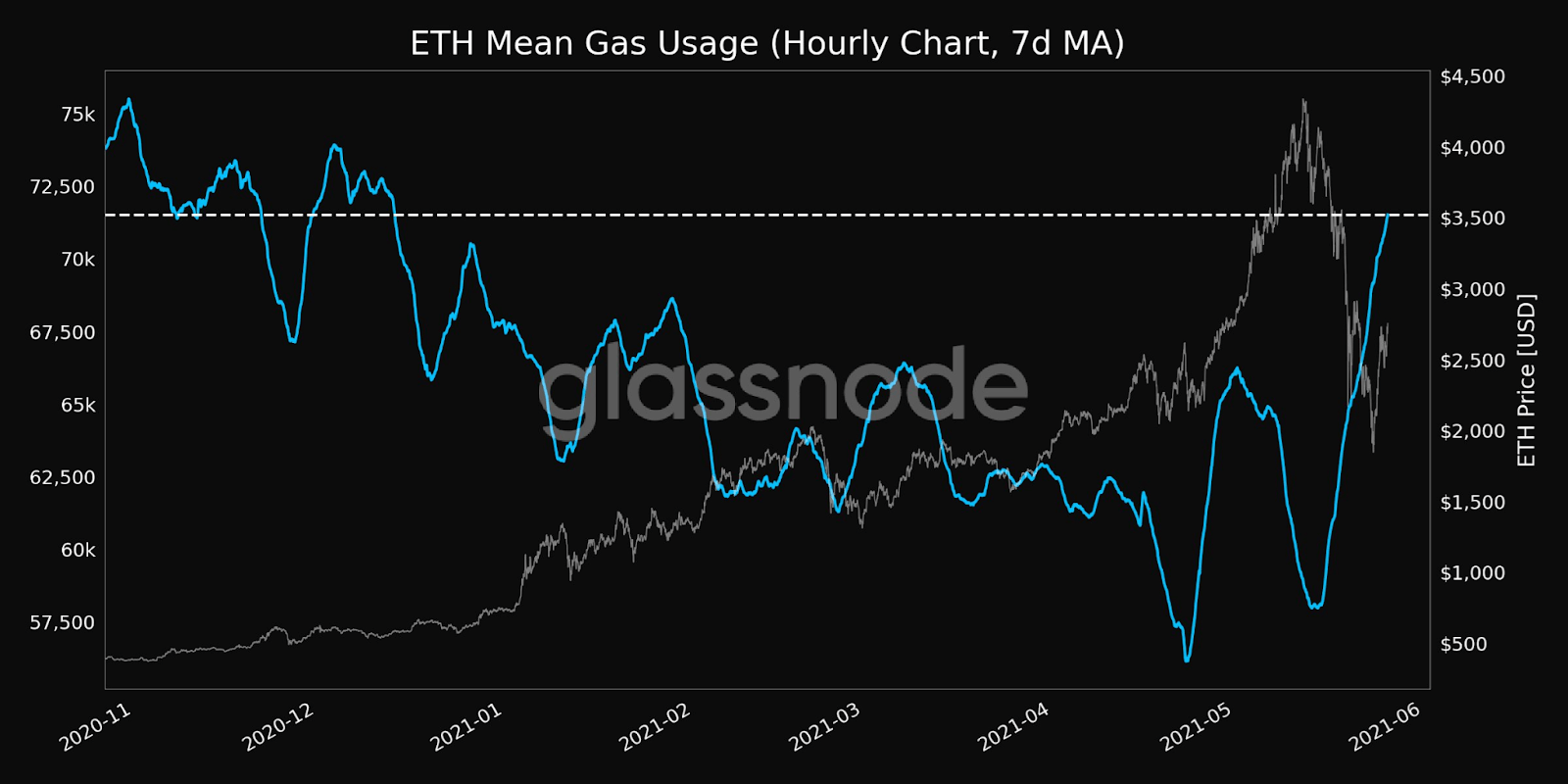 The Ethereum price will need to overcome the 50-day SMA to take down the $3,000 psychological level.