Ethereum Price Analysis: Is ETH On The Verge Of Charting A Double Top?

Ethereum faced heavy correction between January 10 and January 12 as the price dropped from $1,275 to $1,050. However, it looks like the price managed to rally since then and jump back up to $1,275. As of now, the Ethereum price is placed pretty precariously.

Ethereum Price May Jump To $1,300 or Form Double Top

As things stand, the Ethereum price is testing the $1,275 resistance barrier. Do keep in mind that this is the same level that forced the smart contract leader to plummet to $1,050 around January 10. If the buyers do take control, they should be able to push ETH price past the $1,300 psychological zone.

Do keep in mind that the relative strength index (RSI) is about to enter the overbought zone. This could mean that this latest bullish rally is on the verge of coming to an end. However, a couple of clues show us that the present market sentiment is very bullish.

Firstly, there is a lack of robust resistance walls upfront, as shown by IntoTheBlock. Secondly, The MACD in the 4-hour chart is about to reverse from bearish to bullish. Both these indicators tells us that Ethereum is likely going to break past the $1,300 psychological level. 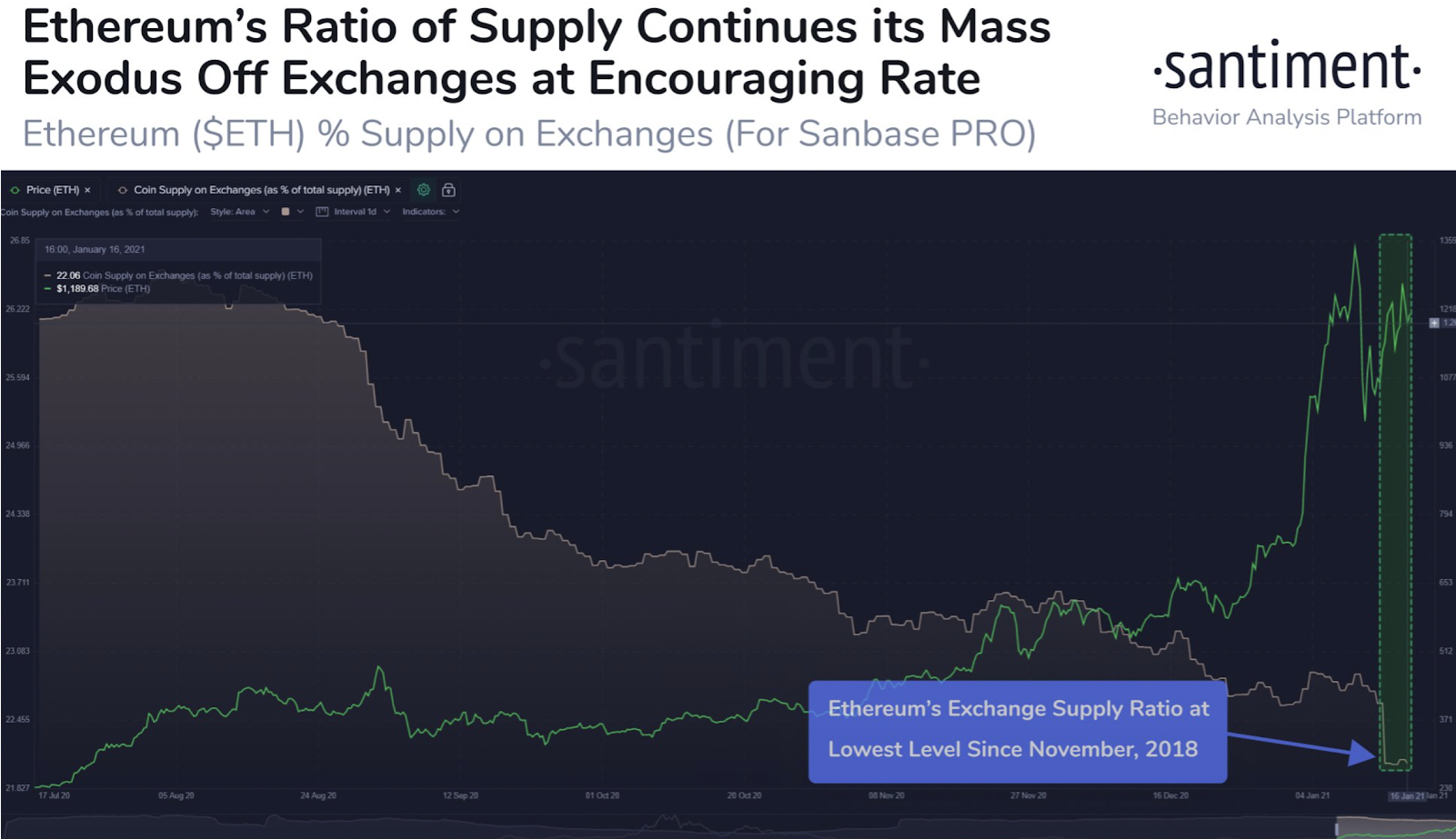 The presented data suggests that Ethereum will continue to move off exchanges. It is most likely to end up in wallets where it will be held or spent as gas for decentralized finance applications. Users may also be transferring ETH to cold storage wallets as long term investments. On the other hand, they could be using it to facilitate a variety of other smart contract-based applications.

2020 saw a boom in the DeFi space. The TVL (total value locked) surged from around $600 million to almost $25 billion. This increased the demand for Ether, which acts as the “gas” for the Ethereum ecosystem. The record growth in DeFi caused Ethereum to reach yearly record highs for transaction fees generated. By this measure, it overtook Bitcoin by a whopping 83% in 2020. This increased use in DeFi means that users needed more ETH to complete their transactions.

The launch of ETH 2.0 initiated the transition of the network from a PoW (Proof-of-Work) to a PoS (Proof-of-Stake) verification method. The latter allows users with a minimum of 32 Ether to stake their Ether or deposit on the network. This introduced a staking contract where users could stake and “lock-up” their Ethereum, with the current ETH 2.0 deposit contract address sitting at over 2.5 million ETH.

Although it is not possible to conclusively say where the ETH is headed as it moves away from exchanges, these are most likely the main factors.

Layer-two Ethereum solutions provider Optimism has recently soft-launched on the mainnet after a year of development. In an official blog post, Optimism outlined the details of the launch and the battle testing that is yet to be carried out on the network.

“Optimistic rollup” intends to make transactions faster and cheaper by running smart contracts outside of Ethereum and only storing the root chain results. The recent deployment is called a soft launch because there is still more testing to be completed. Coinbase and Synthetix have been actively testing the system over the past couple of months.

According to Optimism's announcement, only whitelisted smart contracts will be permitted to run on the OVM - a fully-featured Ethereum Virtual Machine (EVM) compliant execution environment designed for Layer two systems. The company added that authenticated withdrawals will be enabled to prevent malicious activity and admin keys will be used to upgrade the contracts in an emergency.

Lastly, Optimism noted that a full public testnet is scheduled in the near future, and the team hopes to get the public mainnet deployed soon after.

Ethereum Price Is Like Going To Reach These Levels

If Ethereum price breaks past the $1,275 resistance barrier, it should easily reach the $1,300 psychological mark. However, a failure to breach will take the ETH price down to the $1,100 level.