After getting rejected at the $660 resistance barrier, Ethereum had been on a downtrend for the last two days. However, it seems like the trend is about to change. Plus, the whales have opted to be patient instead of selling off their holdings, which is another positive sign. So, let’s take a deeper dive and see what’s going on behind the scenes.

Over the last two days, the smart contract leader dropped by more than $50. In the process, the relative strength index (RSI) fell from 66.50 to 55. However, it looks like the buyers are about to initiate their recovery.

Let's look at IntoTheBlock’s In/Out of the Money Around Price (IOMAP). The price is currently sitting on top of healthy support, which corresponds to the 20-day SMA. Previously at this level, 1 million addresses had purchased 3.78 million ETH tokens.

However, the price faces stiff resistance at $635. If they manage to break above that, the bulls will next face another strong resistance at $660. However, Ethereum users will be happy with the way the whales have been behaving.

As per Santiment, while the number of addresses with 1-100 ETH are holding their lowest collective amount this month, the number of smaller addresses is multiplying. Most importantly, the whales who have at least 100,000 ETH have been patient with their holdings. 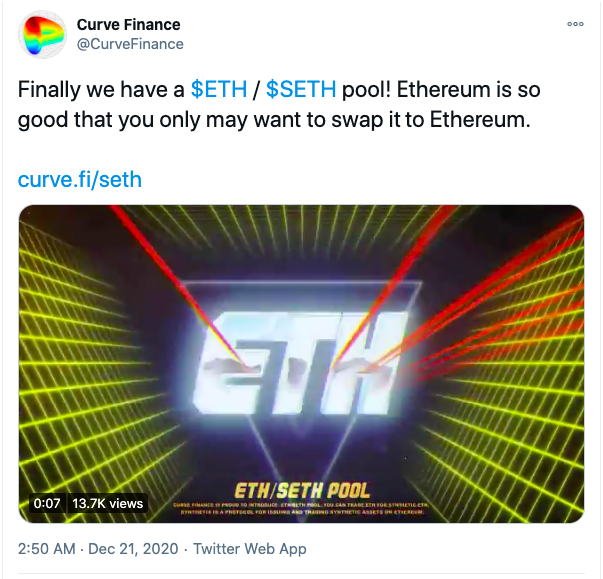 The interface was reporting that there was an admin fee of 0.04% and the average transaction cost yesterday was $7.82, making this new offering only really viable for whales.

The demand for Ethereum-based vaults has been very high this year. The one launched by Yearn Finance in September was ultimately deemed to be a failure. Within the first day of launch, over $100 million in liquidity had been deposited - more than 230,000 ETH at the time.

The high demand yETH vault originally touted upwards of 80% annual percentage yields just for depositing Ethereum. Although it survived its first price crash, it was later closed to further deposits to mitigate risks. Even depositing a small amount of ETH resulted in a loss after a few months when taking into account the high gas fees, pitiful returns and Yearn’s 0.3% withdrawal fee.

Yearn Finance has hinted at another Ethereum vault with new strategies under its version 2 vault’s launch. However, no details have been officially disclosed yet.

The $635 resistance barrier is crucial right now. If the buyers gather enough momentum to breach it, they should be able to make a run for the $700-mark. However, repeated failures could test the 20-day SMA again. If the support breaks, the price will fall to the $580 support, which is apparently as strong as the 20-day SMA.

Ethereum Forecast
eth
Top Brokers in
All Regulated Brokers
67% of retail clients lose money when trading CFDs with this provider.