Following three bearish days, wherein Ethereum price dropped from $1,845 to $1,780, the bulls have managed to stage a comeback and push ETH back above $1,800. As of now, the $1,820 resistance barrier needs to be conquered to bring price back above the $1,850 zone.

Following the last three days’ bearish action, the RSI for Ethereum price is trending along the edge of the overbought zone. As it stands, ETH is stuck between two strong technical levels at $1,820 and $1,760.

As per the IOMAP, previously at the $1,820 resistance barrier, 181,000 addresses had purchased 1.45 million ETH tokens. If the Ethereum price manages to break above this barrier, it should easily reach the $1,850 and $1,900 psychological levels.

Looking at the 4-hour Ethereum price chart, we can see that the 50-bar SMA has prevented ETH from dropping any further. The price has managed to bounce and touch the 20-bar SMA. The MACD shows decreasing bearish market momentum.

Raoul Paul, the co-founder of Real Vision, has predicted that ETH will soon surge to $20,000. In a recent Marco Insiders article, Paul said that his models, including Metcalfe’s Law, suggest that a crypto asset’s value is based on adoption. Metcalfe’s Law states that the value of a network is directly correlated with its number of users.

Pointing to Ethereum, Pal highlighted that the leading smart contract platform’s market cap is highly correlated with its number of active addresses - similar to Bitcoin. 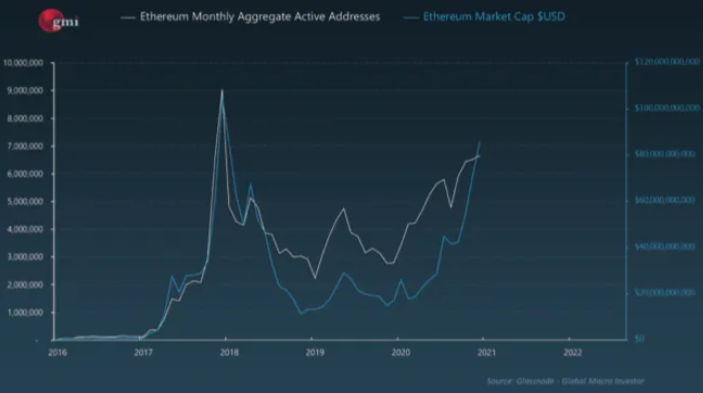 In Paul’s opinion, the correlation between adoption and network value is not a coincidence. He explained that Ethereum’s price distribution and its number of active addresses mirrors Bitcoin’s exact performance at the same stage. He added that Ethereum is six years younger than Bitcoin and that market participants will have to wait for the same network effects to take place.

Please note that the prices are EXACTLY the same too. We didn’t fit for prices, we fitted for 1m active addresses.

Based on Ethereum’s growth trajectory in terms of price and adoption, he believes the second-largest crypto asset will follow in the footsteps of Bitcoin.

ETH will outperform Bitcoin by almost 2x and is driven by the exact same mechanism – a great narrative – the platform for programmable money and, obviously, Metcalfe’s Law.

We believe that Ethereum price has the momentum required to make a dash for the $1,850 and $1,900 psychological levels.

Ethereum
ETH
Top Brokers in
All Regulated Brokers
67% of retail clients lose money when trading CFDs with this provider.