Since January 13, Ethereum jumped up from $1,050 to $1,380 this Wednesday. ETH touched its all-time high level this Tuesday, but has since retraced back. This Thursday, the bears jumped in following five consecutive green sessions.

Ethereum price dropped from $1,380 to $1,330, losing nearly $50 in its overall valuation. In the process, the sellers managed to flip the $1,345 line from support to resistance. The relative strength index (RSI) was trending along the edge of the overbought zone, before it managed to creep back in.

When we see IntoTheBlock’s IOMAP, we can visualize a very healthy support zone at $1,275. Previously at this level, 125,200 addresses had purchased 6.65 million ETH tokens. This zone looks robust enough to absorb a tremendous amount of selling pressure.

Where Is This Selling Pressure Coming From?

With Ethereum price going through a period of bearish correction, a viable question to ask here is – where is all this negative pressure coming from? It seems like Santiment has the answer for us.

It looks like the ETH miners have taken some profit in 2021 since January 3, which could have contributed to this negative momentum.

Ether (ETH) recently hit a new all-time high, in part due to the volatility seen in Bitcoin’s price. According to CryptoCompare’s Bitcoin Volatility Index (BVIN), Bitcoin’s surging volatility is up 51% year-to-date. This has likely caused investors to turn to other digital assets like ETH.

Bitcoin has been in a range for the past few weeks, which gives time for capital to rotate [to other cryptoassets]. 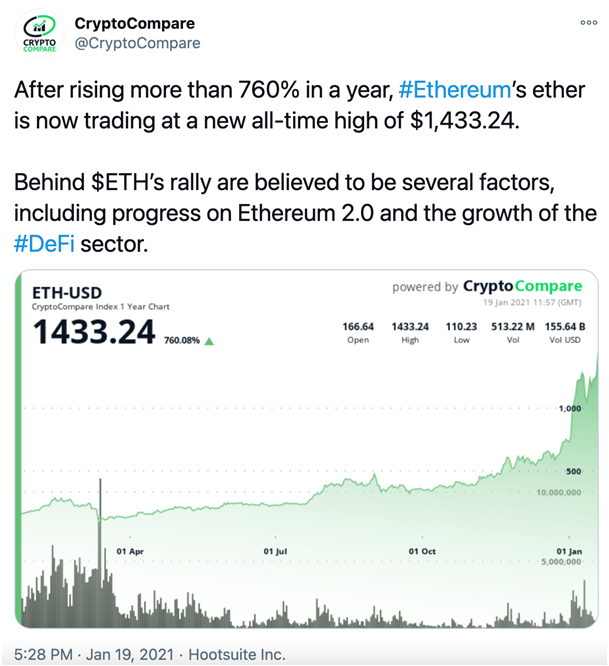 The decentralized finance (DeFi) sector recently saw its total value locked (TVL) surpass $25 billion. Additionally, ETH locked in the Ethereum 2.0 staking contract has been removed from circulation until the network’s proof-of-stake (PoS) upgrade launches. More than $3 billion worth ETH are now locked in it, earning their holders interest.

Ethereum To Benefit From Metcalfe’s Law

Ethereum (ETH) recently set an all-time high price record, beating its earlier peak set in 2017. D H Taylor, an economist and a trader, said that Ethereum will soon follow Bitcoin’s footsteps to rally to $20,000. In Jan 2018, just a few weeks after Bitcoin hit its then-record of $20,000, ETH topped out at $1,419 on Coinbase.

Taylor has based his predicted target on “Metcalf’s Law [sic].” According to a summary cited in a Bitcoinist report, Metcalfe’s Law can map “the rate of growth of a network” using “the square of the number” of its users. Using this law, the analyst claims that Ether will repeat “what Bitcoin did” and move up to $20,000 per ETH. 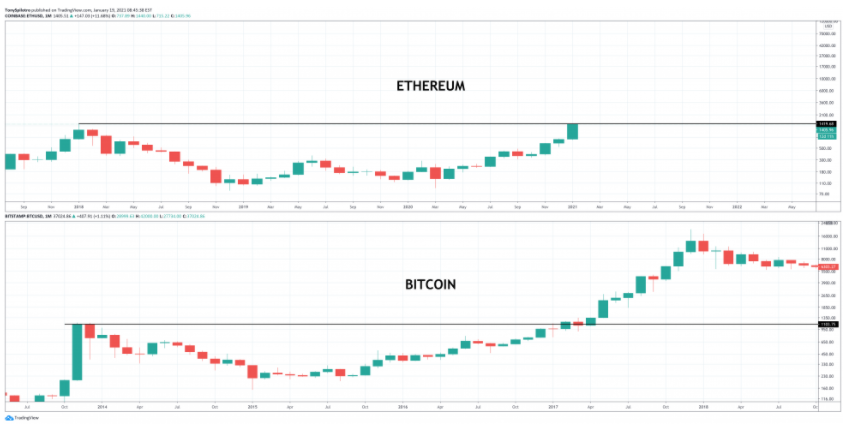 Ether will have to see a 1400% gain from its current prices to reach $20,000. However, other experts such as Claude Erb of the National Bureau of Economic Research in Cambridge,  have used the model to cap Bitcoin’s maximum price at only $73,000 per BTC. Going by this cap on BTC, a $20,000 target on Ether doesn’t seem realistic.

Ethereum 2.0, a little over a month after the launch, currently holds 2.7 million ETH ($3.8 billion). The surging number of stakers and ETH’s recent price rally have helped ETH 2.0 become the third-largest blockchain by staked funds. The network follows Polkadot, with its $10.4 billion locked and Cardano, with $8.3 billion.

According to Beaconcha.in, the staking yield is approximately 9% - a relatively average performance. This yield is lower than Polkadot and Avalanche rewards but higher than most other staking blockchains, as per stakingrewards.com.

Compared to others, Ethereum stakers have the additional obstacle of not being able to withdraw their funds until developers complete the transition to the proof-of-stake (PoS )network. Till this is done, stakers may access their liquidity through third-party services. Several exchanges such as Kraken and Binance offer custodial staking with the ability to sell ETH on the exchange.

Ethereum Price Levels Is Expected To Reach These Level

The MACD in the 4-hour chart shows increasing bearish momentum.

This tells us that a further price drop is expected. In that case, the $1,275 support barrier is probably going to be tested. A further break below this level will take ETH to the 200-bar SMA ($945) in the 4-hour chart.