Between March 25 and April 2, the Ethereum price climbed from $1,590 to $2,135, reaching an all-time high of $2,152. However this is when ETH flashed a sell signal in the form of a green-nine candlestick and the bears took over. Following a brief bullish resurgence over the last three days, the sellers once again took back control.

This Wednesday, the Ethereum price crashed from $2,115 to $1,980 – dropping by almost $135. In the process, the smart contract platform dropped below the $2,000 psychological level. The relative strength index was on the verge of entering the overbought zone, but has since dropped down.

Looking at the IOMAP, the strongest resistance is at $2,050, wherein 270,480 addresses had purchased 11.12 million ETH tokens.On the downside, the healthy support walls coincide with the 20-day and 50-day SMAs.

Sentiment Towards Ethereum Price Is Negative 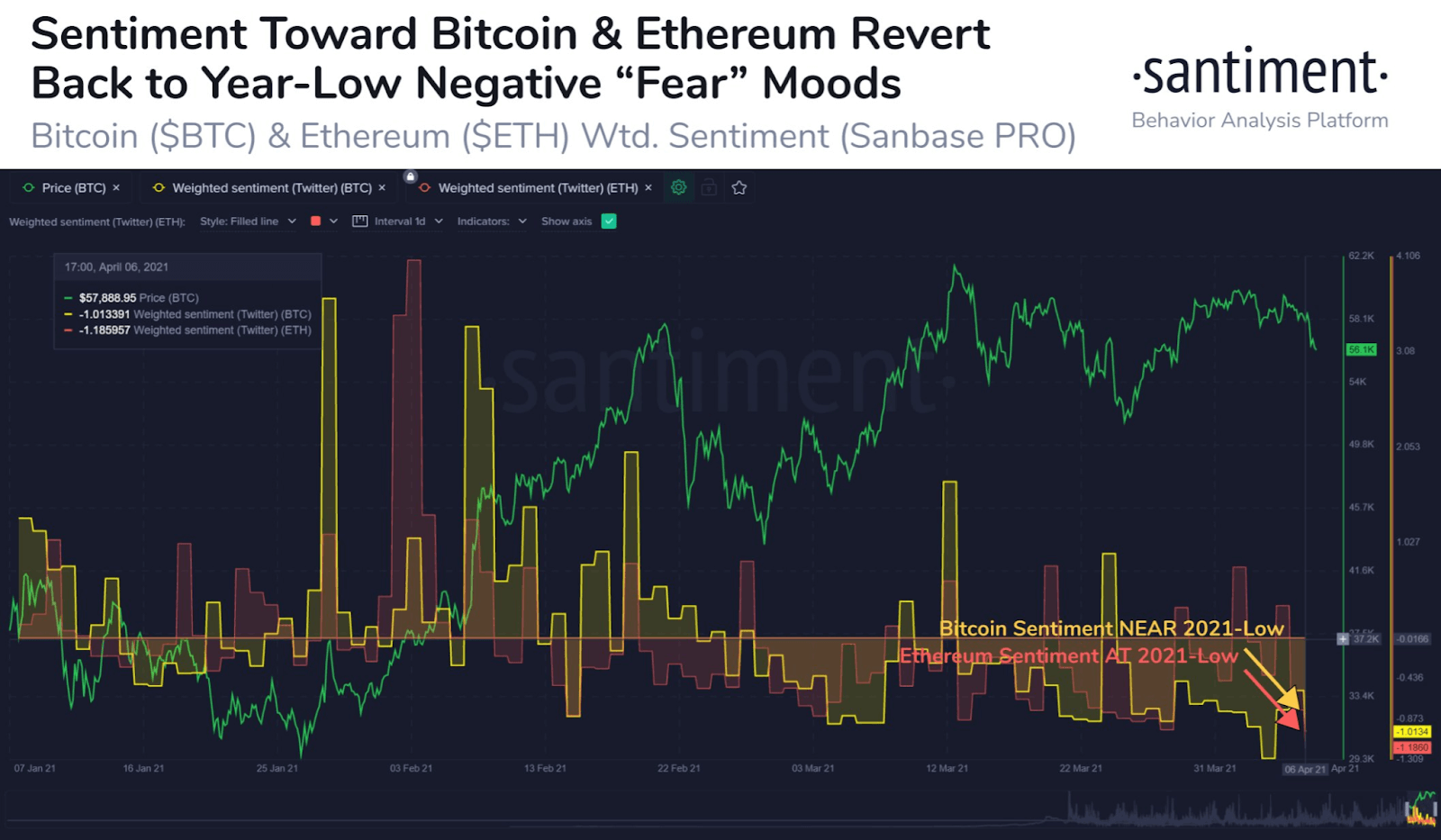 Santiment tweeted that the “Fear” level in investors has reached new heights.

“The crowd mood toward #Bitcoin and #Ethereum appears to have dropped to extreme negative territory after $BTC fell back under $60k & $ETH dipped back under $2k this week. Historically, buying during this level of #FUD & fear is a #bullish opportunity.”

Billionaire investor Mark Cuban said that Ether (ETH) is a better store of value than Bitcoin. In a recent podcast hosted by Laura Shin, Cuban said ETH’s versatility makes it a more attractive asset. He added that Bitcoin is nothing more than a store of value.

There are significant differences between the two. Both of them are effective platforms that enable a lot to happen. But Bitcoin right now has evolved to be primarily a store of value and it’s very difficult to use it for anything else.

Bitcoin boasts almost five times the market cap of Ethereum at present. According to Cuban, this doesn’t necessarily mean BTC is five times better. He noted that Ethereum makes for the better choice between the two regardless of market cap size differences. Cuban said that Bitcoin’s utility is inferior when compared to Ethereum. He pointed out the fundamental difference comes down to smart contracts.

There’s just a lot more built in utility in its organic and native form. Just the ability to use smart contracts organically and natively is a significant difference right now.

Cuban referred to Ethereum Improvement Proposal (EIP) 1559 and ETH 2.0 as reasons for investors to buy ETH over BTC currently.

With 1559 everything changes and what happens going forward is really going to impact how people perceive it specifically as a store of value.

EIP 1559 is scheduled to go live this July as part of the London hard fork. It will improve Ethereum’s transaction fee system by replacing the auction model with a floating standard rate mechanism. Essentially, this would lead to a more predictable fee system with the price set by the network, not miners.

The Ethereum price may regain bullish momentum and try entering the $2,000 psychological mark yet again.