Since July 7, the Ethereum price has dropped from $2330 to $1,930 – dropping below the $2,000 psychological level in the process. The TD Sequential detector tells us that Ethereum could drop for three more sessions before flashing the red-nine candlestick (a bullish sign). The MACD has reversed from bullish to bearish, which hints at a further downtrend.

Looking at IntoTheBlock’s IOMAP, the Ethereum price has critical support at the $1,800 line. Previously, at this level, over 870,000 addresses had purchased almost 2 million ETH tokens.

Ethereum Price Ripe For A Breakout?

A renowned crypto analyst "@SmartContracter" believes that Bitcoin and Ether are poised for massive breakouts amid the bearish sentiment in the digital asset markets. The pseudonymous analyst took to Twitter to note that Bitcoin is forming a bullish pattern indicating that a move to the upside is on the horizon. 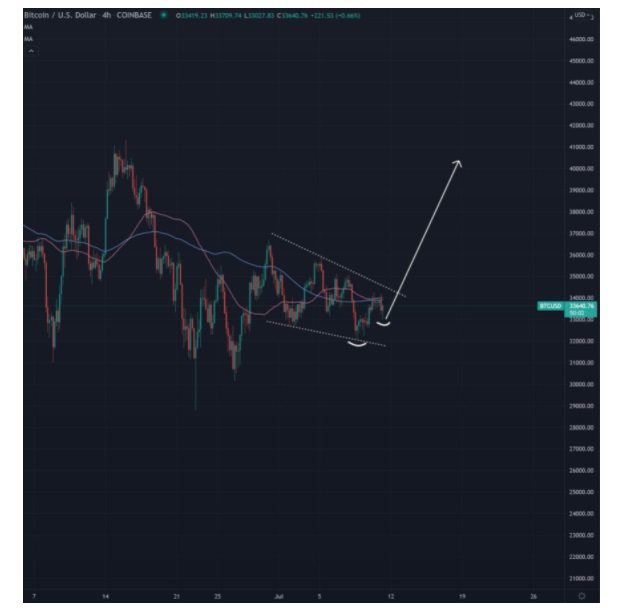 “To me, I see a higher low within a bullish flag forming. I’m still bullish on BTC from these levels.”

According to Smart Contracter’s chart, Bitcoin must take out the pattern’s resistance at $35,000 to ignite a rally to $40,000. Looking at Ethereum, the crypto trader saif that ETH is establishing a bullish higher low setup at $2,000, and it is now poised to rally to just below $3,000 for a 40% surge. 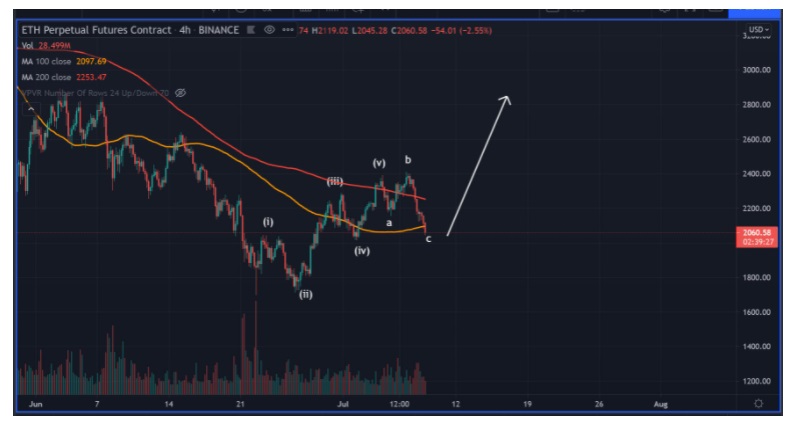 "Five up and now ABC down on ETH/USD. I think we will form a higher low and continue up from here. However, invalidation is still below the $1,650 capitulation wick.”

Smart Contracter used the Elliott Wave technique, a branch of technical analysis that predicts future price action based on crowd psychology that tends to manifest in waves. According to the crypto trader, ETH has completed the ABC corrective pattern and is now ready to launch a new wave up.

The crypto strategist is also keeping a close watch on the decentralized finance (DeFi) sector, which they said is performing better than the rest of the market. The trader added that they are watching four altcoins in the nascent space.

“DeFi has been holding up the strongest during the BTC chop. It’s definitely looking like the fastest horse at the moment. SUSHI (SushiSwap), SNX (Synthetix), Aave, UNI (Uniswap).”

If the Ethereum price continues with its downward spiral, it will break below the $1,800 psychological level and reach the $1,675 support wall.