The Ethereum price also found itself in the red, as altcoins across the market registered a fall. ETH was quite bullish until Sunday, when the price dropped by over 4%, pushing ETH down to $3416. Although ETH recovered on Monday, rising to $3542, the price was back in the red on Tuesday, falling to $3491. The current session sees the price continue to be in the bearish territory as sellers continue to dominate the session.

The Ethereum price started October on a very bullish note, as the price rose by over 10%, pushing past the 20-day SMA and the 50-day SMA to settle at $3311. ETH remained bullish over the weekend, and by Sunday, the price was up to $3420. However, after the bullish weekend, ETH fell into the red on Monday, as the price fell by 0.96% before recovering on Tuesday and pushing past $3500 to settle at $3517, an increase of 3.83%. Wednesday saw the bullish sentiment continue as ETH rose to $3575 before registering a marginal increase on Thursday to end up at $3588. 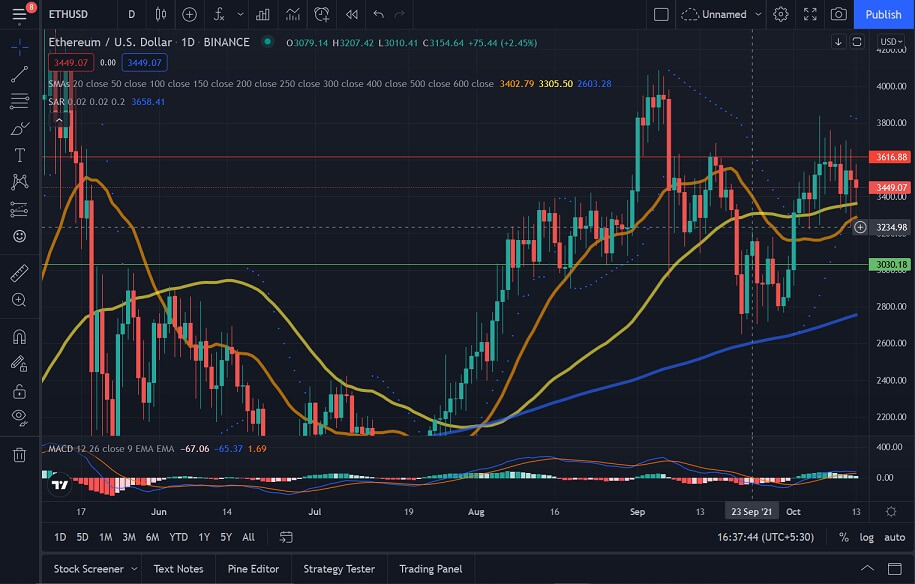 After climbing to $3588 on Thursday, the Ethereum price fell on Friday, as it dropped marginally by 0.70% before posting another marginal recovery on Saturday. However, Sunday saw the price drop by a significant 4.45%, as ETH slipped below $3500 to settle at $3416. The price did recover on Monday, rising to $3542 before falling again on Tuesday, registering a drop of 1.44%. The current session sees ETH in the red, with sellers trying to push the price down to $3400. With the Parabolic SAR already bearish, if the current sentiment persists, then we could see the MACD flip to bearish as well.

Looking at IntoTheBlock’s IOMAP for the Ethereum price, we see that Ethereum has strong support at around $3194. At this level, over 1.1 million addresses have bought more than 11 million ETH.

The 4-hour Ethereum price chart shows that ETH had surged to $3616 on the 6th when the price rose by 6.88%. However, ETH could not remain at this level, and the price dropped to $3521 before rising to $3613. ETH maintained this level over the subsequent few sessions, with the 20-bar SMA acting as support. However, the price fell below the 20-bar SMA on the 10th, as ETH fell to $3530 and then to $3416, which saw the price fall below the 50-bar SMA too. ETH recovered from this level, as it rose to $3577, but with the 20-bar SMA now acting as resistance, the price quickly fell to $3458, slipping below the 50-bar SMA once more. Currently, ETH is around $3444, and with the Parabolic SAR and MACD, both bearish could fall further during the session. 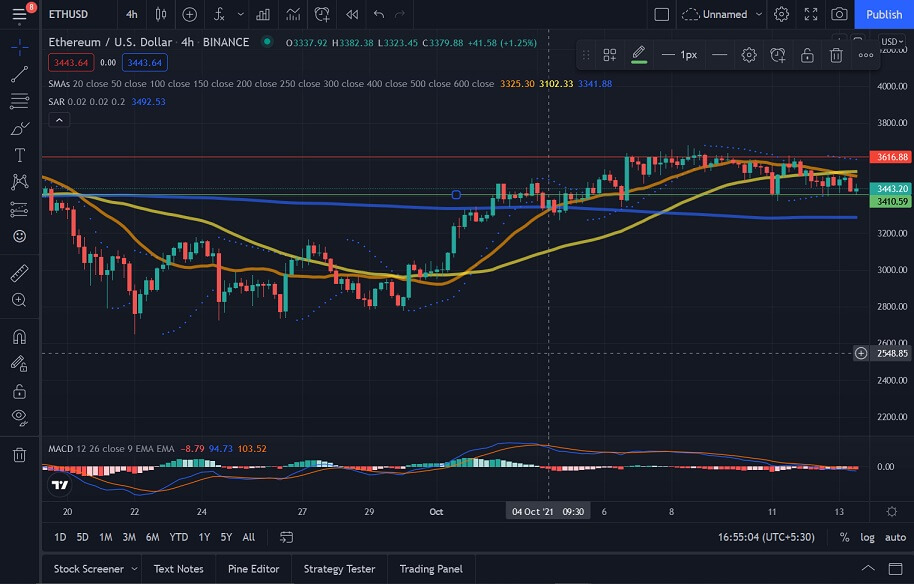 According to the recent edition of Bloomberg Galaxy Crypto Indices (BGCI), Ethereum could soon become the top cryptocurrency, unseating Bitcoin. The report highlighted that Ethereum is leading the DeFi revolution and playing a key role in making the dollar the “primary global currency” by facilitating the Tether stablecoin.

Several key market players have long held this stance. Earlier, deVere Group CEO Nigel Green stated that Ethereum could perform the feat in five years. Green expects this to happen as he believes that compared to Bitcoin, Ether has more real-use potential.

More recently, Ethereum supporters have highlighted that Ethereum could attain this milestone faster than expected. As many players note, the growing interest from institutional investors in the second-largest cryptocurrency could facilitate the flippening more than anything else.

Several experts believe that institutions consider Ethereum to be a form of money that has its digital economy.

Pointing to several institutions that entered the Ethereum market, including Grayscale, Ark Invest, and Standard Chartered, proponents explain that this recognition means that Ethereum now has a higher potential of growth and offering a higher risk-reward ratio than Bitcoin.

Meanwhile, the tension between Bitcoin and Ethereum proponents continues to build up. Recent comments by Ethereum founder Vitalik Buterin have further escalated the rift. Per previous reports, Buterin lashed out at El Salvador’s adoption of Bitcoin as legal tender, describing it as a power grab move by President Nayib Bukele to gain favor with Bitcoin maximalists who are very easily pleased.

Looking at the Ethereum price chart, we can see that ETH had flipped to bearish since Sunday when the price registered a significant fall of almost 5%. The current session also sees ETH in the red, and with sellers in control of the session, we could see the price fall to $3400 if the current sentiment persists.