Ethereum price is in the middle of a bullish rally which has seen it cross the $2,300 psychological level. Before this, ETH fell from $2,325 to $1,775 between July 7 and July 20 and flipped the 20-day and 200-day SMAs from support to resistance. It also reversed the parabolic SAR from positive to negative.

Is Ethereum Price About To Drop?

Ethereum has done 9 consecutive bullish sessions between July 21 and July 29, jumping from $1,775 to $2,311.  During this jump, ETH managed to flip the 20-day, 50-day, and 200-day SMAs from resistance to support. Along with that both the MACD and parabolic SAR indicates positive market sentiment.

However, Ethereum price has managed to trigger, or is going to trigger, two sell signals: 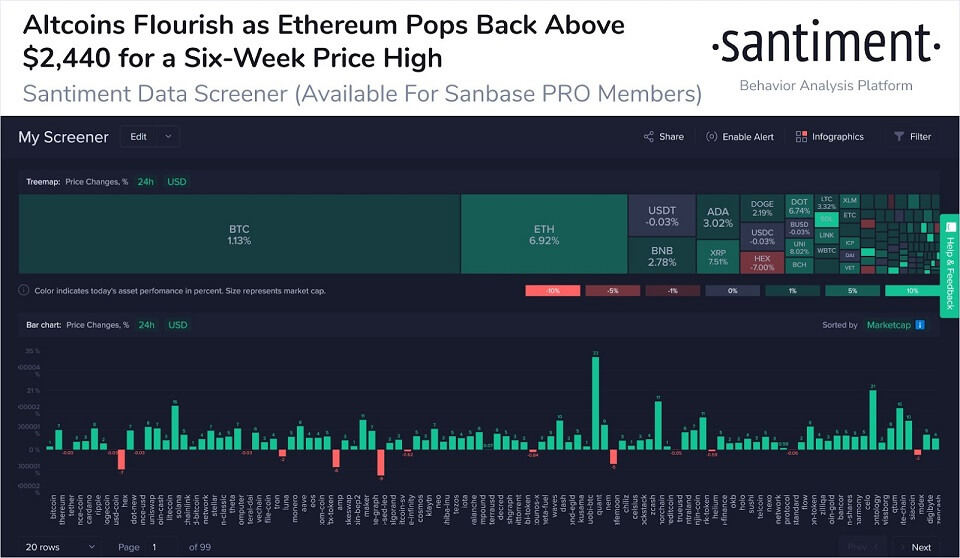 “While #Bitcoin has danced around $40k for the past couple of days, #Ethereum and #altcoins have been having a price bounce party to make up for lost time. $QNT, $ONT, $RUNE, $SOL, and $ARRR have been leading the charge the past 24 hours.”

“#Ethereum and #altcoins have rebounded, as average returns in our predictive 30-day MVRV metric have turned positive for $ETH, $GRT, $UNI, $MKR, $MATIC, & more. Read about how market expectations seem to be connected to theanticipated London hard fork.”

Just $20 million of the $1 billion in cryptocurrency that Ethereum co-founder Vitalik Buterin donated to a COVID-19 relief fund in India has so far been cashed out and distributed to aid recipients. In a recent interview with Cointelegraph, the fund’s founder, Sandeep Nailwal shared his views on the scenario.

In May, Buterin’s decision to liquidate several of his meme coin positions and donate the proceeds to various charities had prompted panic and admiration. Many traders rushed to lock in their profits amid the price collapses that Buterin’s sell-offs would trigger.

However, even among traders, there was some recognition that the price dumps affecting these intensely hyped coins would provide some respite from rising transaction costs on the Ethereum network. Moreover, when it transpired that Buterin had donated the proceeds to several charities, many in the community welcomed the move.

However, Nailwal shared some of the difficulties involved in cashing out Buterin’s generous contribution. So far, just $20 million has been paid out, with a further $20 million planned for the near future.

Nailwal, who also co-founded Polygon (formerly Matic), told reporters that some of the delays are due to his caution and desire to ensure the funds reach grassroots organizations transparently. To this end, he plans to hire a reputable auditor to help oversee the process as it continues.

Moreover, due to the price crashes Buterin’s liquidations triggered, the initial $1 billion in value that the 50 trillion Shiba Inu coins represented at the time of their sale soon dwindled by around 50%. Nailwal has estimated their eventual total value is likely to be around $400 million.

Disbursing the funds has also come up against a mountain of red tape, with the requirement to comply with India’s Foreign Contribution Regulation Act as the tokens are converted into dollars and then rupees. Roughly 80% have reportedly been converted thus far.

The crypto funds are reportedly being distributed to food distributors nationwide, and an organization is working on establishing mini-intensive care wards for COVID-19 patients in rural India.

If our upcoming bearish thesis holds, then the Ethereum price could drop to $2,175 before meeting healthy support.