The bulls took charge of Ethereum price on March 25, during which it was trending around $1,590. Since then, the price rose steadily and reached an all-time high of $2,152.45 on April 2. However, the price then flashed a sell signal and dropped.

The Ethereum price flashed a sell signal in the form of a green-nine candlestick in the TD sequential detector. Since then, ETH dropped to the $2,005 support line and then bounced back up to $2,085. The MACD shows that the market momentum is increasingly bullish.

Now, when we look at the social media sentiment, Santiment tells us that the overall Twitter sentiment has turned positive after Ethereum price reached all-time high level. 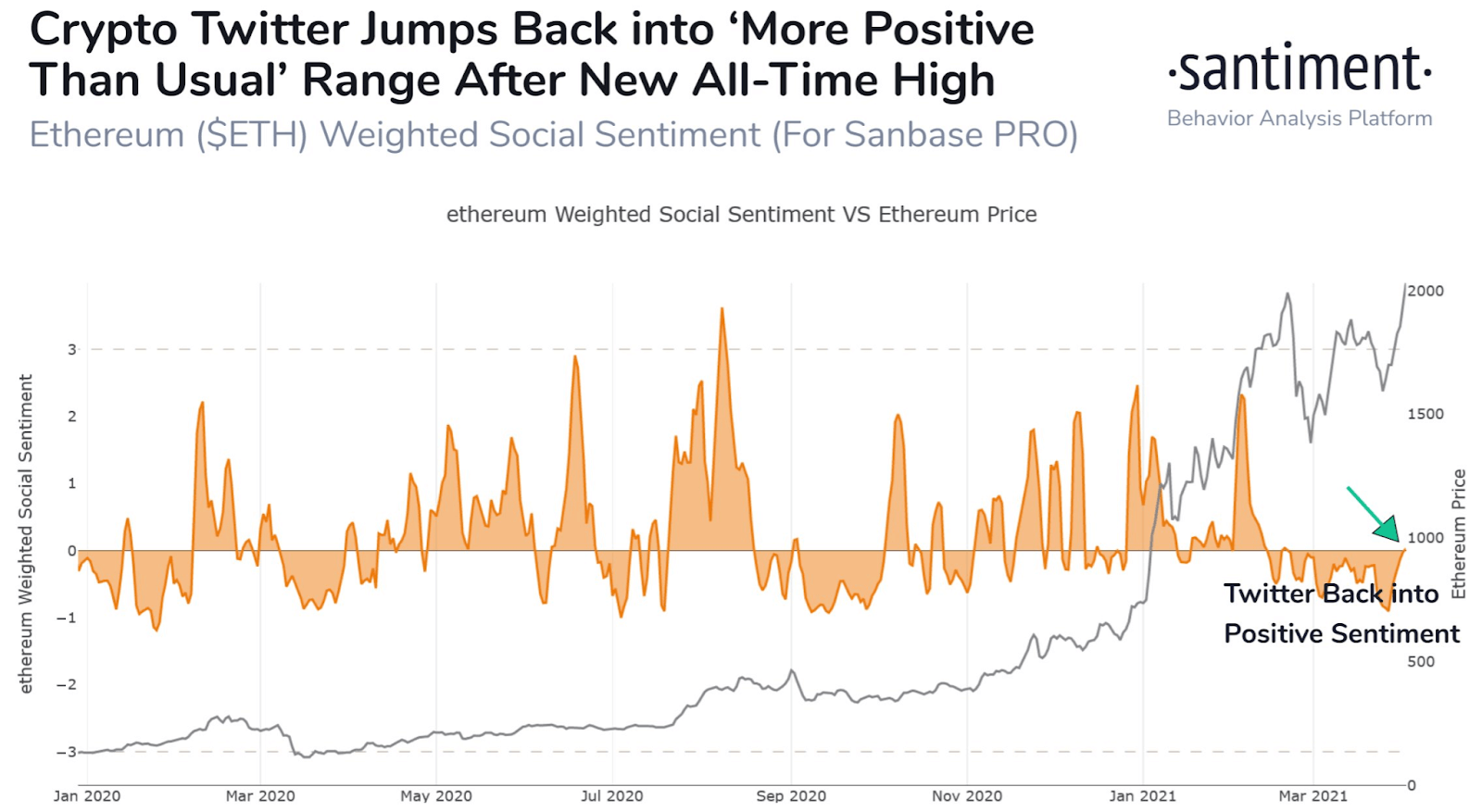 “When history is made on the 2nd largest #crypto asset, it's worth a comprehensive look at which metrics led to #Ethereum's #ATH being broken. Read how exchange inflow, social volume, dormant tokens, & others should continue to be major price predictors.”

There is another chart regarding Ethereum price that Santiment shared: 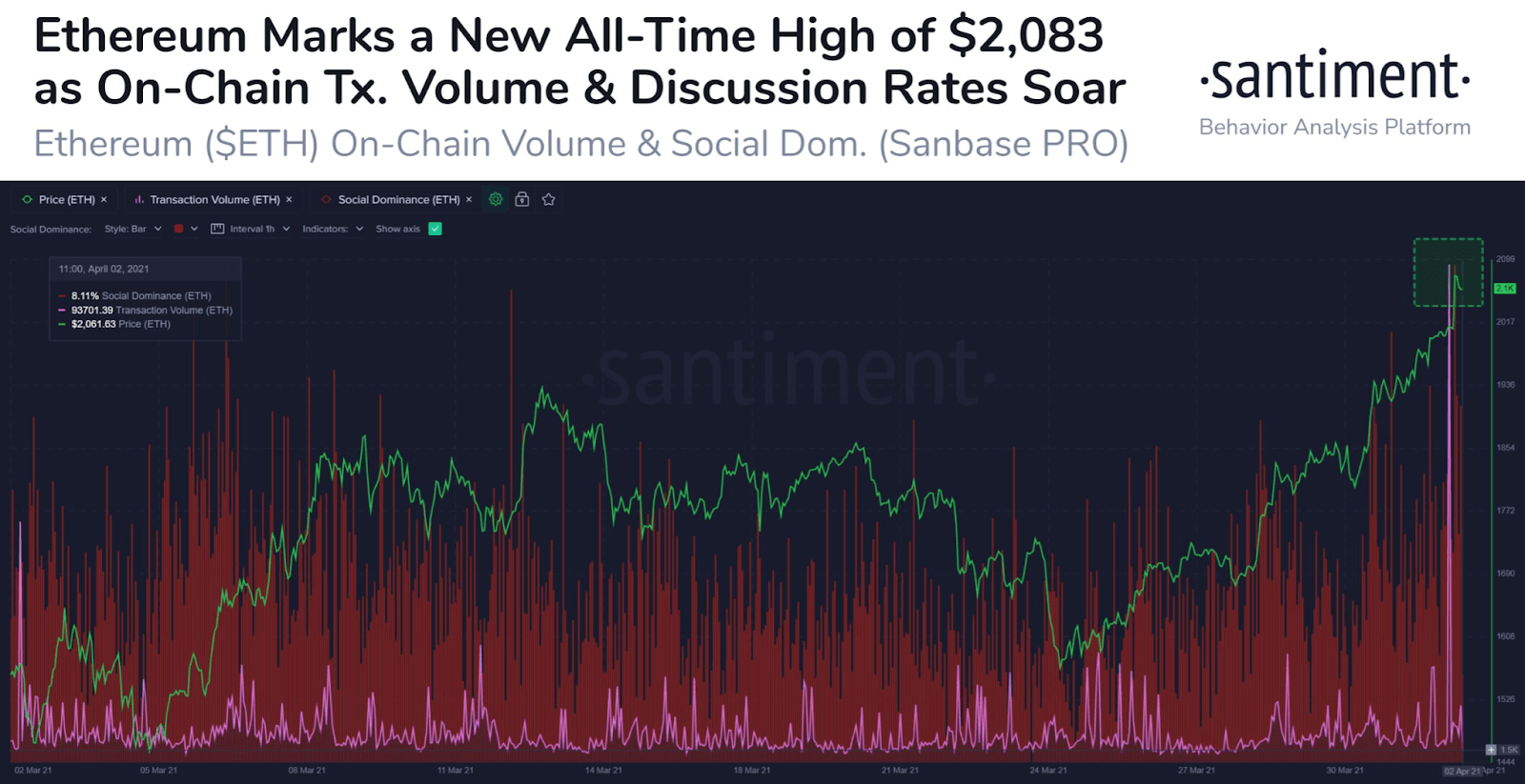 "#Ethereum bulls, #GoodFriday has a brand new meaning, jumping to a new #AllTimeHigh of $2,083 today. The hour before this price was achieved, we saw $ETH's on-chain transaction volume spike. After being hit, discussion rates reached a 7-week high."

CryptoQuant CEO Ki Young Ju recently said that 400,000 Ether (worth $800 million) were withdrawn from Coinbase. He noted that the move might have been fueled by institutional demand for the second-largest cryptocurrency by market cap. 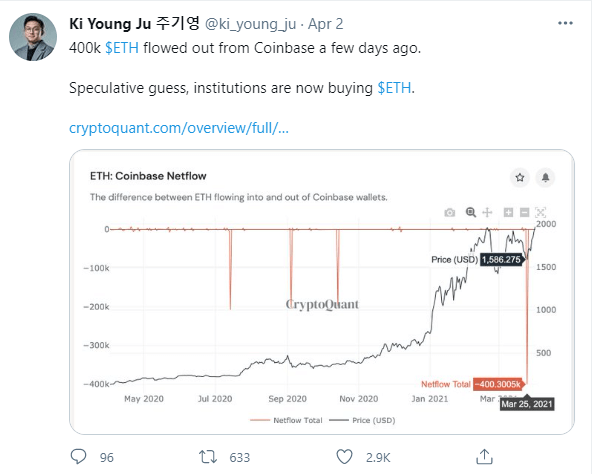 Earlier this year, Grayscale disclosed that in the last quarter of 2020, 93% of all capital inflows into digital assets were from institutions. The average weekly investment into the Grayscale Ethereum Trust during that period was $26.3 million. At the beginning of March, crypto analytics firm Santiment said that large investors (defined as those holding over 10,000 ETH) were in control of nearly 70% of the digital asset’s supply.