Ethereum Price Prediction: ETH Has Recovered And Overtaken The $1,600 Level

The Ethereum price dropped from $1,935 to $1,570, falling by nearly $350 over the last two days. During this downward movement, ETH has managed to flip several critical levels. Let’s take a closer look with technical analysis.

Ethereum Price Has Recovered After $350 Correction

The buyers now face robust resistance at $1,700, wherein 493,000 addresses had purchased 2.83M ETH tokens. This level is strong enough to absorb a lot of buying pressure.

However, when we see the 4-hour Ethereum price chart, we can see that after flashing buy signal in the form of a red-nine candlestick, the price had recovered to $1,700, flipping the 200-day SMA from resistance to support.

These Two Reason Show Why Ethereum Price Could Reclaim $2,000

After reaching new all-time highs, Ether (ETH) has dropped significantly amid a broader cryptocurrency market correction. The drop in ETH’s price has brought the asset to $1,300 levels, with bears forecasting further declines.

Ether was not the only asset to plummet. Bitcoin fell 21.72% from its week-to-date top. Binance Coin’s BNB, Polkadot’s DOT and Chainlink’s LINK also fell by similar or higher margins. Meanwhile, many experts have said that the ongoing price correction is an opportunity to acquire cryptocurrencies for cheaper prices, given the market’s overall bullish outlook against global economic uncertainty.

You should be using those dips to increase your positions or to accumulate if you were waiting for a position in the markets. The majority of the markets are hitting higher timeframe support levels and are bouncing. It’s beautiful.

Reports suggest two catalysts that could propel the ETH/USD rates higher. First, Ethereum devs’ announcement that they have scheduled the long-awaited Berlin hard fork for mid-April. This upgrade would enable live swapping ETH tokens from a proof-of-work chain to a proof-of-stake blockchain, a move that expects to solve the high gas fees problem on the network.

Second, the growth in the total number of addresses on the Ethereum network. Santiment illustrated the ETH adoption rate, noting that it indicates buying opportunities in the market. In retrospect, a higher number of new wallets have indicated that traders may buy the underlying asset at some point in the future.

Ethereum is back to a market price of $1,779, down 12.6% from its #ATH made Saturday,” wrote Santiment. “However, the rising trend of active addresses and new addresses created on the $ETH network remains evident. Buy opportunities may arise soon via our data signals.

Binance exchange has recently announced that it has “temporarily suspended withdrawals of ETH and Ethereum-based tokens due to high network congestion.” This is the second time in the past seven days that Binance has suspended its Ethereum withdrawals. 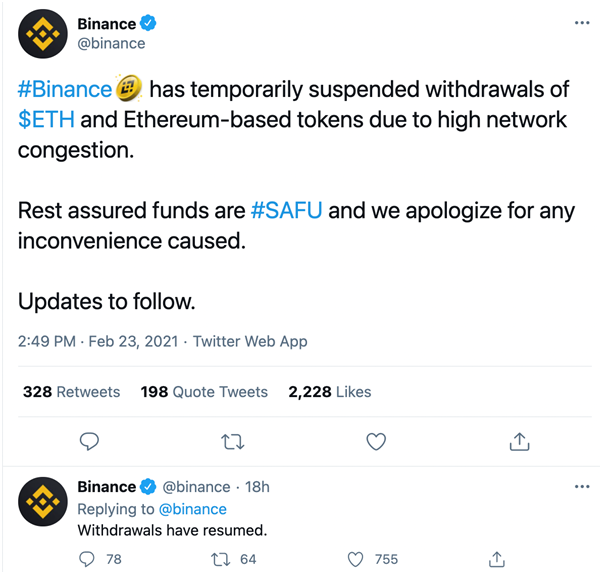 On February 19, a similar event took place where Binance suspended ETH and ERC-20 withdrawals, also citing “network congestion” as the reason.  The exchange reassured investors that their “funds are SAFU” but didn’t provide any additional details both times.

During the February 19 incident, blockchain analyst Larry Cermak had said that the Ethereum network didn’t seem to be congested and that he was unable to withdraw ETH even before the suspension announcement. At the time, Ether was around its all-time high and poised to break the $2,000 mark. However, due to the suspension, ETH prices stagnated just below the $2K margin. Meanwhile, Binance Coin (BNB) surged $60.

This led to speculation about the motives of the suspension including potential wash trading of BNB.

The Ethereum price will likely improve to $1,700 before it stalls due to strong resistance.