Ethereum Price Prediction: ETH Is Stuck Below The 200-day SMA

On June 4, the Ethereum price faced resistance at the 50-day SMA and crashed from $2,850 to $1,875 till June 22. During this crash, ETH flipped the 20-day SMA from support to resistance, and also reversed the parabolic SAR from positive to negative. Let’s see what happened after that.

Looking at IntoTheBlock’s IOMAP, we can see that the Ethereum price faces immediate resistance at the 200-day SMA ($1,900). Previously, at this level, over 335,000 addresses had purchased almost 8.65 million ETH tokens. 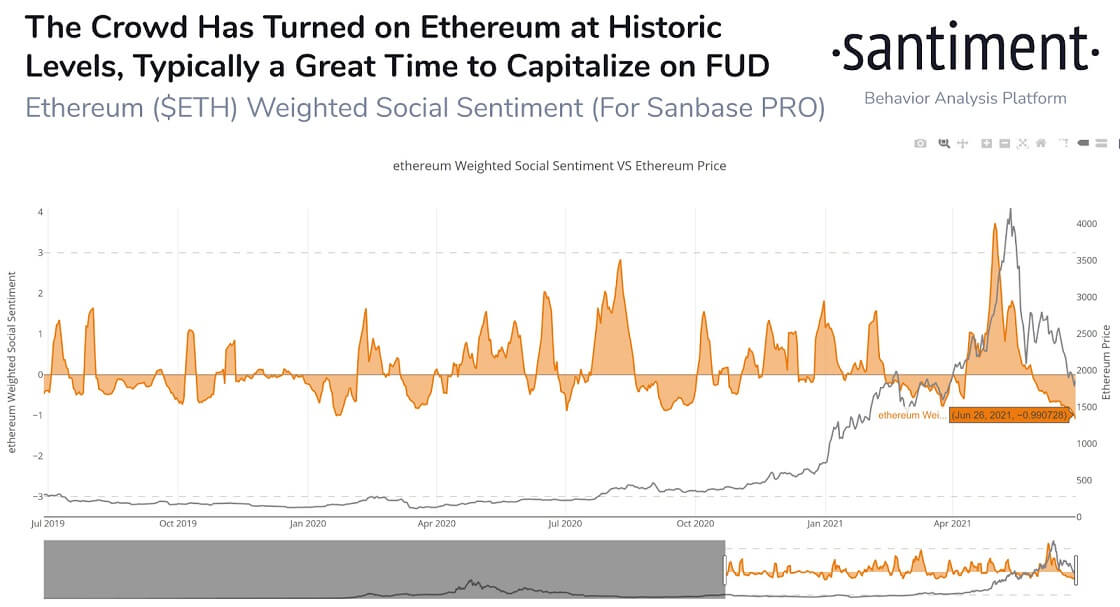 "#Ethereum is teetering between $1,850 and $1,900, and indicators imply the #2 asset in #crypto is trading at a slightly undervalued spot. Read how the crowd's #FUD toward $ETH and traders being underwater may be exactly what #bulls have been waiting for."

Crypto analyst Lark Davis recently said that Ethereum (ETH) is massively undervalued and could potentially explode in the coming years.

In a new video, Davis compared Ethereum to PayPal, showing that Ethereum is already far outpacing the payment giant despite its smaller size in terms of market capitalization.

Well currently, the market cap of PayPal [is] $344 billion. So Ethereum is worth $100 billion less than the PayPal company is worth. Now you might think, ‘Okay, that’s a pretty bad comparison. PayPal, it’s such a huge company. It does so much more business than Ethereum.’

Does it? Well, let’s dig into the facts here.”

Davis noted that in 2020, PayPal handled $936 billion in total transaction volume. Compared to Ethereum, Davis said that PayPal isn’t keeping pace. The second-largest cryptocurrency handled $1.5 trillion in total on-chain settlements in just the first quarter of 2021 alone, according to the crypto analyst.

Lark mentioned that in just the first quarter, Ethereum recorded 50% more transactional volume than PayPal did in 2020. He added that it is no wonder that PayPal is starting to sell Bitcoin and Ethereum to their clients "because they’re gonna get Blockbustered if they don’t."

Smart move, PayPal, smart move. But that, of course, is a nice strategic move, but the numbers really speak for themselves about the dominance of Ethereum as an online settlement provider. It’s incredible. $1.5 trillion in Q1. And you know what’s the crazy thing? It’s been even more than that. That’s just Q1 we’re talking about.”

If the buyers don’t have enough momentum to break above the 200-day SMA, the Ethereum price will drop to the $1,750 support. A further break will take ETH to $1,650.