Over the past four days, ETH jumped up from $2,200 and $2,733. Looking at the daily Ethereum price chart, we can see that it has flashed two buy signals.

Ethereum Dormant Tokens On The Move 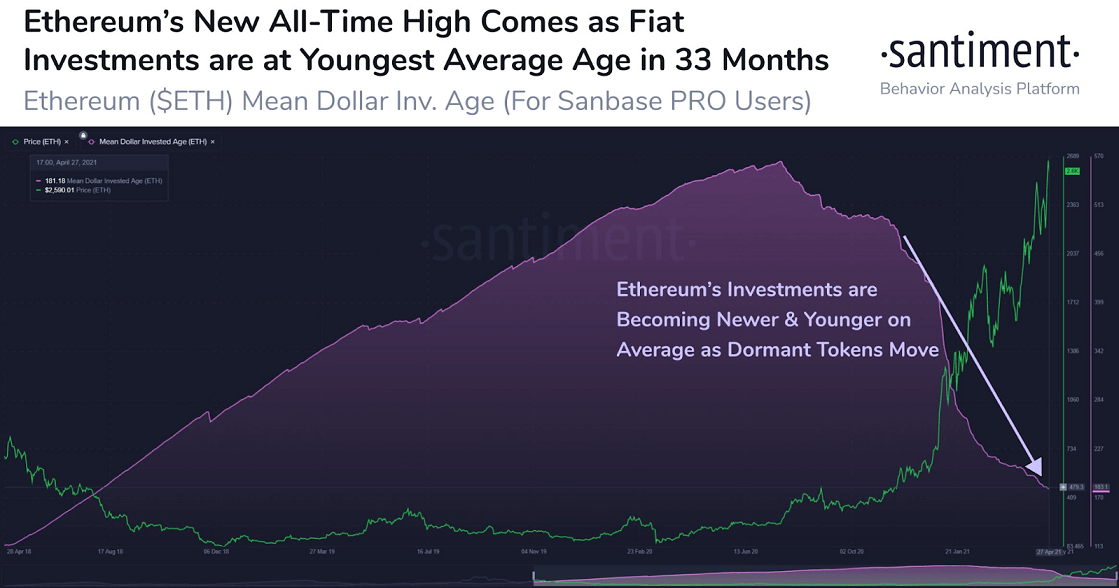 Santiment shared the above chart along with this tweet:

"#Ethereum's dormant tokens are moving rapidly to justify yet another #AllTimeHigh above $2,740 today. With many new $ETH addresses being made and dormant tokens cycling rapidly, this is the youngest average investment we've seen since July, 2018."

Ether prices skyrocketed to a new all-time high recently following the positive news from the European Investment Bank (EIB). ETH surged to $2,709 yesterday, marking a new peak price for the asset, according to Coingecko.

Coingecko reported a gain of 15.7% over the past seven days for ETH. The move has pushed the asset's market cap to a record $312 billion. While there is a range of factors propelling the price, Reuters attributed it to the news of EIB launching a “digital bond” sale through the Ethereum network.

The EIB is issuing a two-year 100 million Euro ($US120.8 million) digital bond. According to Bloomberg, the bond sale will be led by Goldman Sachs, Banco Santander, and Societe Generale.

On April 23, Societe Generale announced that its subsidiary Societe Generale SFH had issued a 100 million Euro bond as a security token on Ethereum. It was awarded the top triple-A rating by Moody’s and Fitch.

Danny Kim, the Head of revenue at crypto broker SFOX, told Reuters that the news demonstrated a bullish institutional use case for Ethereum. He added that exchange balances are also decreasing, continuing to the bull case.

The amount of Ethereum sitting on exchanges continues to drop lower and has been the lowest in the past year. With less supply on exchange available, there's less likely a chance of a major sell-off.

Meanwhile, popular crypto analyst "Altcoin Sherpa," predicted that ETH would continue to outperform BTC in the coming weeks, targeting a price of $3,000.

The buyers will want to keep on riding this bullish wave and reach the $2,800 psychological level.