Ethereum Price Prediction: ETH Recovers Back Above the $1,800

This Wednesday, the Ethereum price broke below the $1,825 resistance level and the $1,800 psychological level. However, the buyers have since managed to take back control and push ETH back above $1,800. The parabolic SAR shows us that the current market sentiment is positive.

Ethereum has a powerful support zone between $1,600-$1,650, which sees a confluence of 20-day and 50-day SMAs. Previously, at this level, 278,400 addresses had purchased a staggering 10 million ETH tokens. Even if a catastrophic downturn does happen, it looks very unlike that ETH is going to drop below this support wall.

In a bid to protest the implementation of Ethereum Improvement Proposal (EIP) 1559, some ETH miners are planning to direct their hashing power to the Ethermine mining pool, which opposes the proposal.

The coordinated action is set to take place on April 1 and will last 51 hours, signifying their intent to harness more than 51% of the network’s hash rate. During this time, the participants are planning to analyze what will happen to the Ethereum network for “educational purposes.” 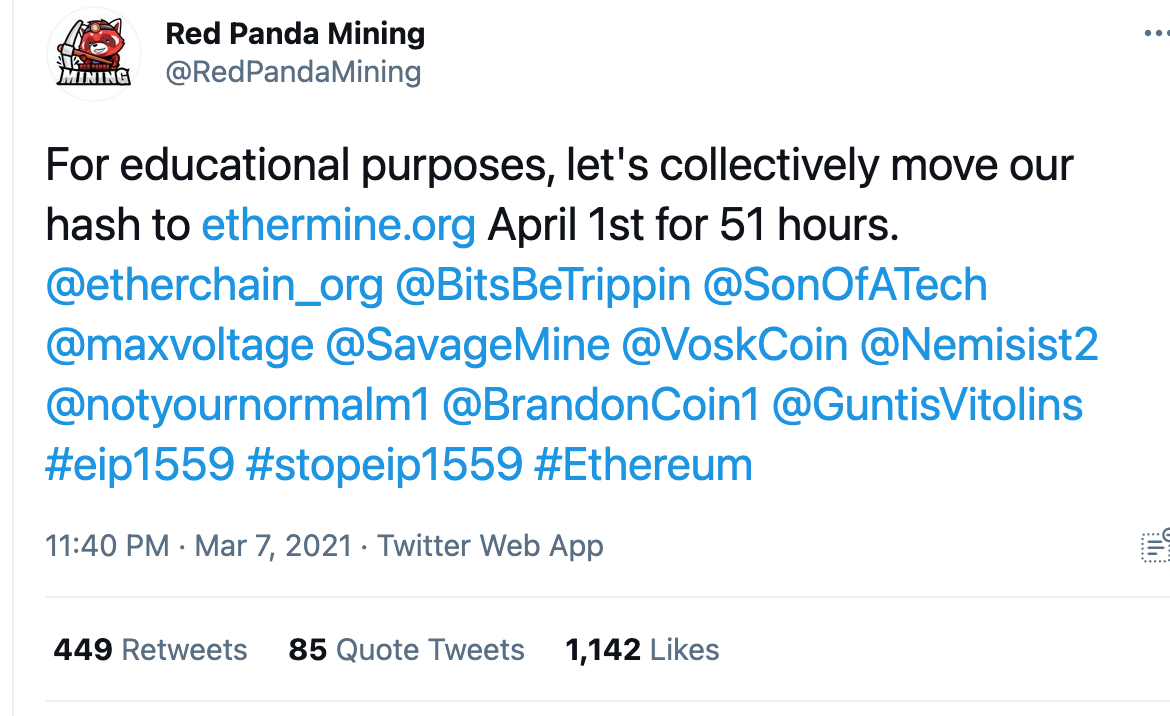 EIP 1559 is a fee market reform proposal that aims to bring wholesale changes to miner fees and wallet UX along with the addition of a deflationary burn mechanism. Its purpose is to address high gas fees. However, its implementation won’t necessarily mean lower gas prices for users.

Ethereum miners generally oppose this because it will swap the current bid-based system for a set fee, dubbed base fee. This will likely result in a cut in miner revenues. The last core devs meeting revealed that EIP 1559 would be packaged with the London hard fork this July.

Reddit user DCinvestor slammed the actions of Ethereum miners planning to participate in the April 1 action. He accused them of having “an extractive mindset” that cares for nothing but getting paid. The user added that the miners’ actions will hurt all stakeholders in the near and long term.

Ethereum is just a network that pays them. they “love it” because it’s paid them a lot, but they have zero attachment to its community, users, or apps (b/c according to the f2pool lead, many miners don’t even use the network).

Ethereum price will want to break above the $1,825 resistance line and touch $1,900 before it encounters another obstacle.