Due to the aforementioned drop in Ethereum price, the MACD had reversed from bullish to bearish. As per the TD sequential detector, ETH has flashed a buy signal in the form of a red-nine candlestick. Due to this, the buyers managed to push up ETH from $1,870 to $1,900.

Looking at IntoTheBlock’s IOMAP, the Ethereum price faces immediate resistance at $2,075 which sees a confluence of the 20-day and 200-day SMAs. Previously, at this level, over 350,000 addresses had purchased almost 8.65 million ETH tokens.

According to Messari’s second-quarter decentralized finance review, the Ethereum network has settled $2.5 trillion between April and June this year. The firm explained that this represents a gain of over 65% quarter-on-quarter and almost 1,500% year-on-year. If the current pace continues, the Ethereum network could settle $8 trillion by the end of this year, Messari noted.

Researcher Ryan Watkins stated that the largest driver of this growth continues to be DeFi and stablecoin activity. 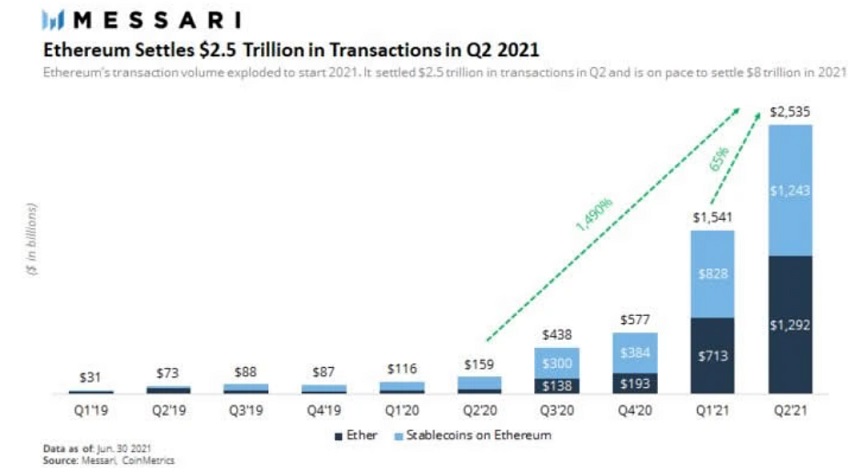 For the same quarter in 2020, when the DeFi sector was just starting to bubble up, $159 billion was settled on Ethereum. Going back a year to 2019, when markets were still largely bearish, just $73 billion was settled on the network. Ethereum whales have also been increasing their holdings, with the top ten ETH wallets now controlling more than 20% of the entire supply.

Stablecoins made up about half of the total settlements for the quarter despite the decline in ERC-20 based tokens on Ethereum. Messari noted that in Q2 2021, the stablecoin monetary base reached over $107 billion, up 70% since Q1 and more than 800% year-over-year. The three-month period has facilitated $1.7 trillion in transaction volume for stablecoins, up 1,090% year-over-year and 59% since Q1, the report added.

The biggest growing stablecoins in Q2 were USDC, BUSD, and DAI, which grew their market share to 23%, 9%, and 5%, respectively. USDT is still the market leader. However, its dominance is gradually fading as rivals eat into its share. Its total supply is reportedly currently 62.4 billion, an increase of 197% since the beginning of the year. Of this total, less than half or 30.9 billion USDT are on the ERC-20 token standard.

The Ethereum price could jump up to $2,050 if the buyers continue to remain in control.