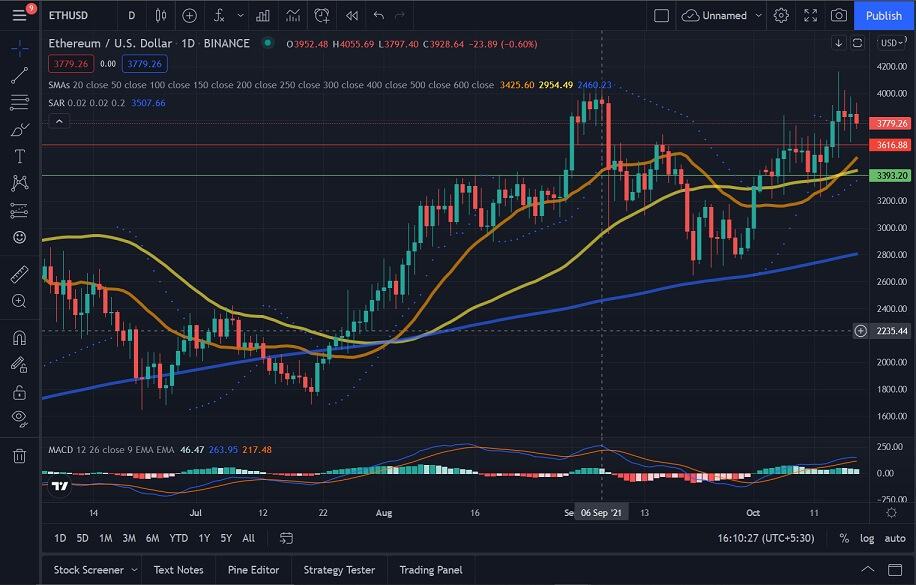 After pushing above $3600 on Wednesday, the Ethereum price continued to remain bullish, as the price rose further on Thursday, registering an increase of 5.12% and moving to $3791. Friday saw the bullish sentiment continue, as the price rose to $3868 before falling into the red on Saturday and falling to $3829. However, the price posted a minor recovery on Sunday but started the current session in the red, as sellers pushed the price below $3800. While the Parabolic SAR and the MACD are bullish, if the price continues to fall, we could see both flip to bearish.

Looking at IntoTheBlock’s IOMAP for the Ethereum price, we see that Ethereum has strong support at around $3373. At this price level, over 1.2 million addresses have bought more than 11 million ETH.

The 4-hour Ethereum price chart shows us that ETH had fallen below the 50-bar SMA on the 11th when the price dropped to $3416. The price recovered from this level, rising to $3591, but with the 20-bar SMA acting as resistance dropped to $3458 and back below the 50-day SMA. With both the 50-bar and 20-bar SMAs acting as resistance, ETH could not push beyond this level until the 14th, when the price rallied strongly to push above both the SMAs, pushing above $3800 and settling at $3808. The price then rose further, pushing above $3900 and settling at $3958, before dropping back below the 20-bar SMA to its current level. We can see that the Parabolic SAR and the MACD are both bearish, indicating that we could see the price fall further. 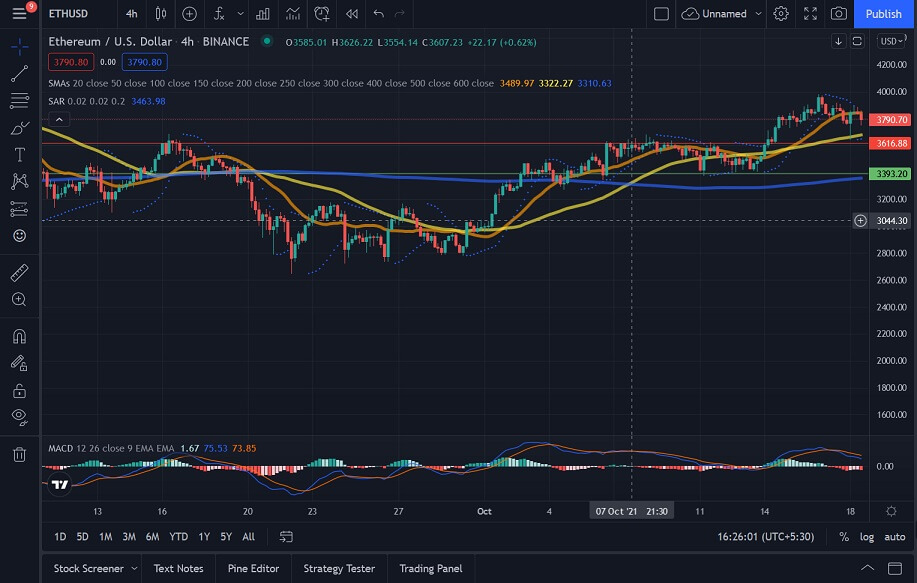 In an interview with CNBC, popular investor Barry Sternlicht revealed his stance on cryptocurrencies, saying he owned Bitcoin and Ethereum. The Starwood Capital founder opined that they are great for diversification and cited Michael Novogratz’s previous comments on the show.

The billionaire put cryptocurrencies ahead of gold and silver based on their range of uses. He said that “gold is kind of worthless,” and aside from being a store of value, their industrial use is minor. Apart from gold’s limited use, he cites the printing of fiat money by governments “now till the end of time” as part of why he made the switch to cryptocurrencies.

For him, cryptocurrencies are “a finite amount of something and it can be traded globally… that the world has accepted as a substitute for gold.”

Aside from using them as a store of value, Sternlicht has a lot of faith in the potential of blockchain technology.

He believes that digital ledgers will change everything. While Sternlicht hailed the opportunities cryptocurrencies offer investors, he also pointed out some of their flaws. He noted that their inherent volatile nature was a source of worry for investors.

Bitcoin took the biggest hit from his comments as he described the largest cryptocurrency as a “dumb coin and has no real purpose other than a store of value.”