The Ethereum price, after falling over 4% on the 26th of August, ETH staged a dramatic recovery, rebounding by almost 6% and, in the process, pushing past the 20-day SMA that was acting as resistance at this point. ETH closed out Friday on $3275, and it was expected that ETH could push higher over the weekend. However, bearish sentiment took over, with all subsequent sessions since Friday in the red. Selling pressure also pushed ETH back down below the 20-bar SMA, with the price falling by almost 2% already in the current session.

Despite the gains made on Friday, ETH started Saturday on a bearish note, with buyers subsequently taking control of the session. While the session did not see much movement in the price, ETH fell by 0.85% on Saturday to close on $3247. Sunday also saw a marginal drop of 0.66%. However, the current session saw ETH buckle under the selling pressure, with the bears managing to pierce the 20-day SMA that was acting as support and pushing ETH below it. The price has already gone down by almost 2% in the current session, and we could see it fall back towards $3100, where ETH has strong support. 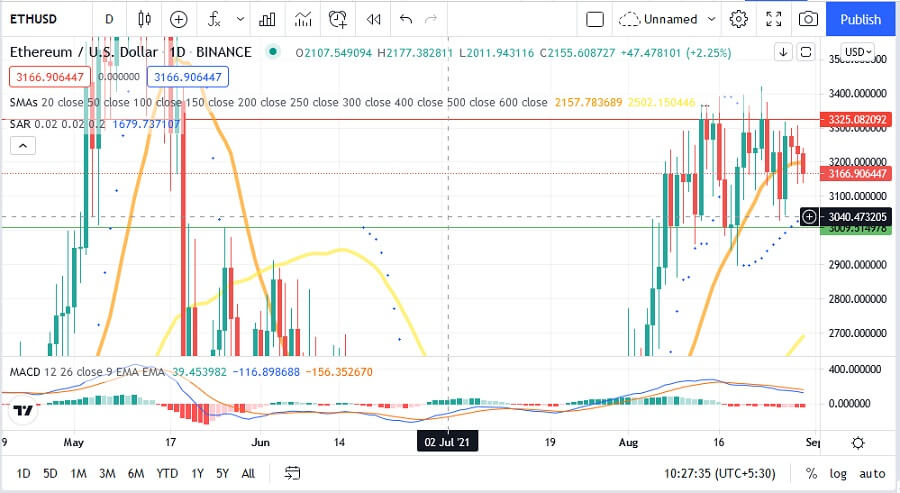 Looking at the Ethereum 1-day, we can see that while the overall sentiment is bullish, ETH has seen a slight drop in price in recent sessions. ETH has repeatedly tried to push on to $3400 numerous times since the 13th of August but has repeatedly been pushed back. However, ETH has made significant gains in price, and we could see the price rebound once ETH reaches $3100. The MACD has flipped from bullish to bearish, while a bullish Parabolic SAR indicates that ETH could rebound once it finds support. Whether buyers can push ETH back up from $3100 remains to be seen.

Looking at IntoTheBlock’s IOMAP, we can see strong resistance at the $3200 mark, where over 1.5 Million ETH addresses have sold over 11.5 Million ETH. However, the IOMAP also shows support at $3100.

Looking at the 4-hour Ethereum price, we can see the 50-bar SMA acting as resistance and pushing ETH lower. In the previous session, ETH fell by almost 2%, to close at $3164. In the current session, we can see buyers and sellers trying to control the session. We also see a possibility of a bullish cross between the 20-bar SMA and the 50-bar SMA. If that does occur then, we could see ETH rebound and push towards resistance. The MACD has currently flipped from bullish to bearish, and so has the Parabolic SAR since Sunday. However, if sellers can control the market, we could see both the MACD and the Parabolic SAR flip to bullish. 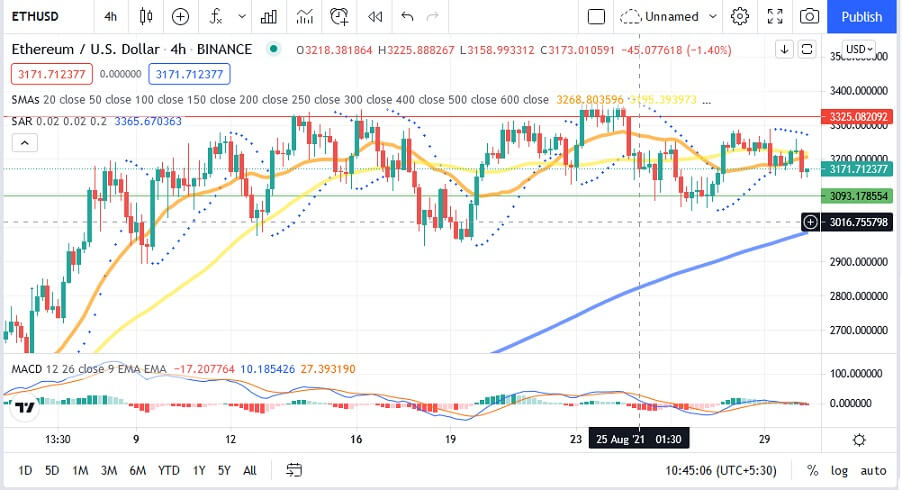 Here Is Why Ethereum Inflation Is Falling 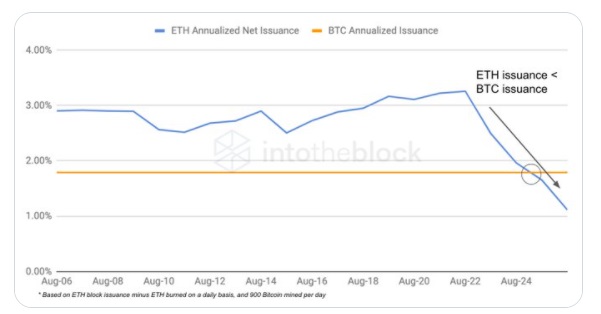 Outumuro also said that Ethereum’s falling issuance rate could bestow a monetary premium on the second-largest cryptocurrency by market cap, potentially allowing the asset to transmit value over time without users having to worry about the possible loss of purchasing power.

“Ether’s decreasing issuance raises questions about how it is valued. Previously closer to ‘digital oil’ ETH’s value moved in tandem with its usage. Now that its issuance is provably lower (and potentially deflationary), it is likely to develop a monetary premium like BTC.”

The blockchain researcher adds that the non-fungible token (NFT) craze contributed to Ethereum’s falling issuance as it increased the fees generated, a portion of which are burnt.

“The recent surge in NFT activity has significantly increased Ethereum fees and the amount of ETH being burnt along with them. This has led to several hours where more ETH was burnt than issued, effectively making it deflationary during brief periods of time.”

Finally, Outumuro noted that the deflationary pressures on Ethereum would help it become a store of value.

Looking at the 1-day chart, we can see that the ETH price has fallen below the 20-day SMA, which was acting as support. Ethereum’s next level of support is around $3100, where we could see the price stabilize if the bears continue to push the price lower. If the buyers are able to retake the market at $3100, we may see ETH rebound to $3200.