The bulls managed to push back the Ethereum price above the $1,600 psychological level and is currently priced at $1,620. This Thursday’s correction brought the relative strength index (RSI) from the overbought zone to the neutral territory.

When we see IntoTheBlock’s IOMAP, we can see that the Ethereum price is sitting on top of a healthy support level at $1,550. Previously, at this level, 201,000 addresses had purchased 1.4 million ETH tokens. This support barrier seems strong enough to absorb a lot of selling pressure.

When we see the 4-hour ETH chart, the MACD has reversed from bullish to bearish, so it does look like the Ethereum price will go through a temporary correction.

Dormant Ethers Are On The Move 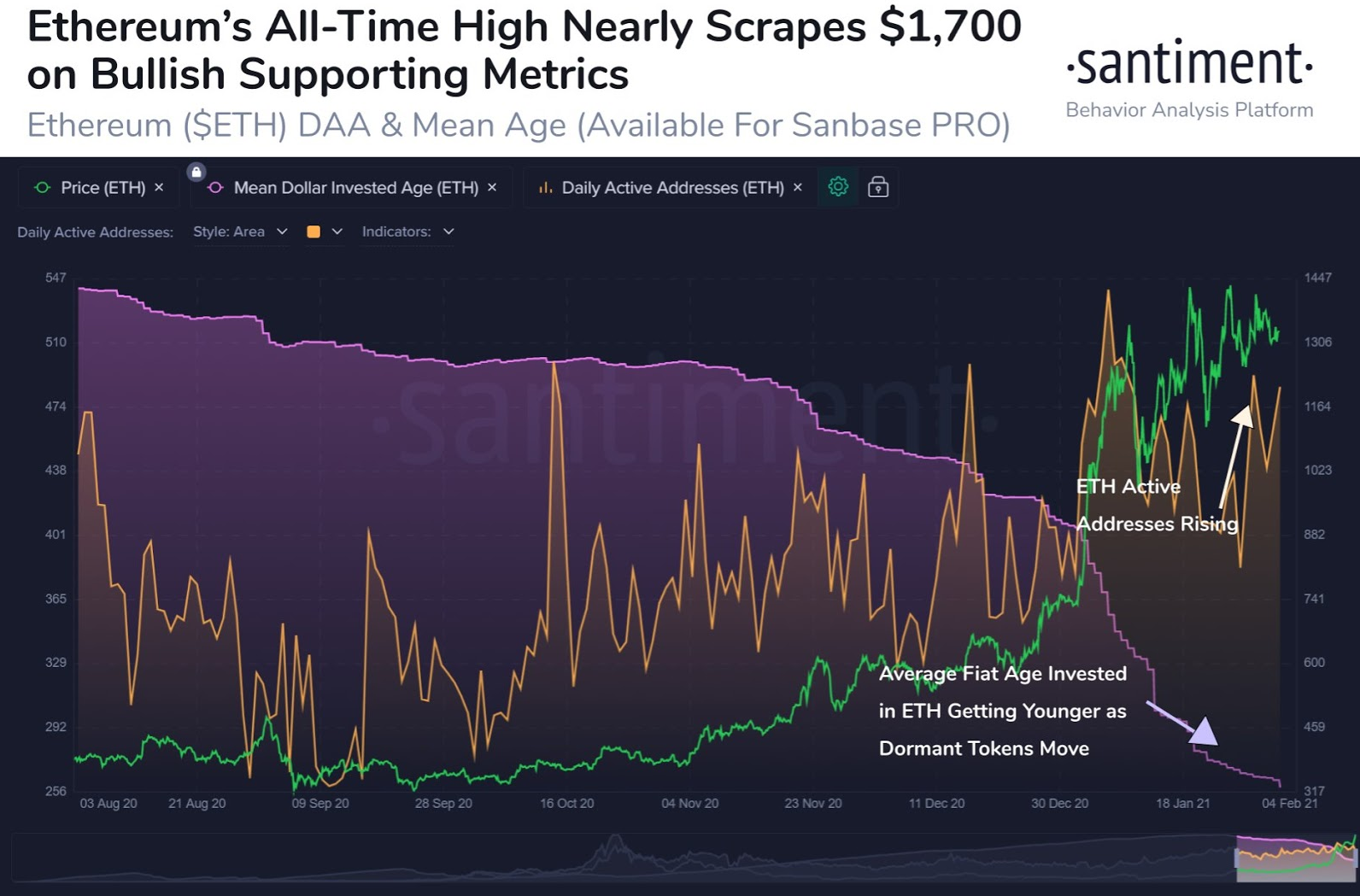 Santiment, a leading on-chain analytics firm, noted that the number of dormant Ether tokens are on the move, while the daily active addresses have continued to rise. This combination is usually very positive for Ethereum price.

In a recent report titled “Valuing Ethereum,” Grayscale Investments has discussed the impact EIP-1559 could have on Ethereum’s economics. The company said that introducing the proposed EIP-1559 fee and burn mechanism could create “a positive feedback loop for Ether’s price” if the network activity continues to increase on Ethereum.

Ethereum co-creator Vitalik Buterin and Ethhub co-founder Eric Conner proposed EIP-1559 in April 2019. The proposal seeks to implement a fee market and burn mechanism to bring Ethereum’s often-high gas fees under control. In December, Buterin again urged Ethereum to adopt EIP-1559. The proposal could result in ETH being burned at a rate higher than the creation of the new supply. This would significantly shift the supply-demand dynamic supporting the ETH markets.

The proposal suggests a “base fee” that will be burned to facilitate transactions in addition to a tip that miners will receive. The base fee will increase or reduce based on whether the network is above or below 50% capacity. This will allow wallets to predict fluctuations in gas prices better and establish ETH as the network’s sole native economic unit.

If the burning of ETH to pay for transactions outpace the creation of new ETH supply, Grayscale speculates that EIP-1559 could be extremely bullish for the ETH price.

If activity increases and the supply of Ether decreases due to burning, a supply and demand curve would indicate an increase in the unit price of Ether because each unit would need to satisfy a greater proportion of economic activity. If EIP-1559 is implemented, it would institute a consumption mechanism that should serve as a positive feedback loop for Ether’s price.

Grayscale Shows How Much They Value Ethereum

Grayscale Investments has recently released a report titled “Valuing Ethereum” to guide investors who are looking to get started with Ethereum. The report characterizes the methodology for valuing ETH as “opaque and changing.”

Grayscale’s research wing puts out reports on different aspects of the crypto ecosystem. A few months back, the company has released a similar article called “Valuing Bitcoin.”

The recent guide suggests that you can either look at ETH as money (as a kind of commodity intrinsic to the Ethereum network) or as an “interest-bearing asset” in the context of Ethereum 2.0. ETH 2.0 will involve a shift from proof-of-stake consensus from the traditional proof-of-work model. 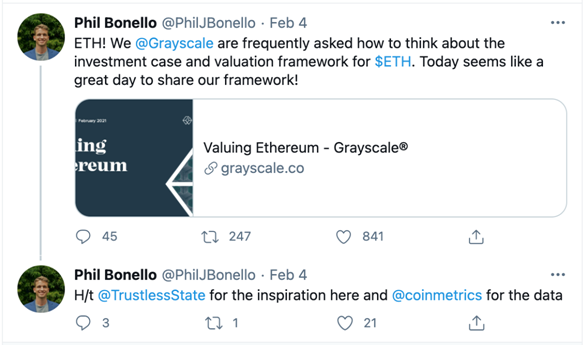 Grayscale suggests that the later stages of Ethereum’s 2.0 upgrade could be a net positive for the value of ETH. Phil Bonello, Grayscale’s research director said:

Between the enormous amount of activity on Ethereum, the economic improvements to Ether, and the promise of increased scalability with Ethereum 2.0, there is a lot for the Ethereum community to be excited about. We can observe from the data that the price of Ether tends to move with underlying activity on the network.

If our short-term bearish hypothesis holds, the Ethereum price will likely correct and drop to the $1,550 support line before it bounces back up.