The Ethereum price climbed from $1,800 to $2,225 between June 26 and July 3, gaining $425 in its overall valuation. Due to this climb, ETH successfully flipped the parabolic SAR from negative to positive. Following this rally, however, ETH has entered this lethargic horizontal trend.

Since July 4, the Ethereum price is stuck between the $2,200 support wall and the 50-day SMA as it continues to hover horizontally around $2,250. The MACD indicates sustained bullish market momentum, but don’t expect any wild price swings.

Looking at IntoTheBlock’s IOMAP, the Ethereum price has healthy support at $2,200. Previously, at this level, over 500,000 addresses had purchased almost 9.35 million ETH tokens. 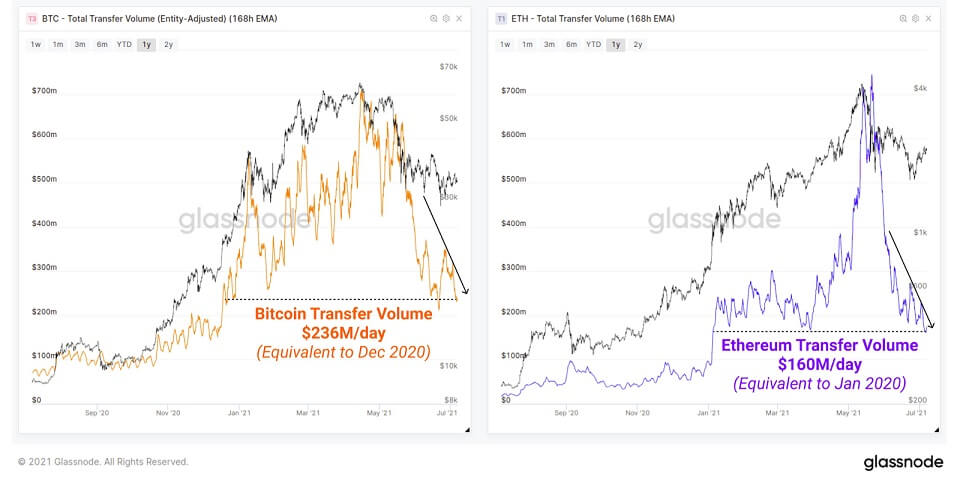 In a recent note to investors, Goldman Sachs outlined its reasoning behind the claim that Ethereum will eventually become a better store of value than Bitcoin. According to the note, the bank believes Ethereum currently looks like the digital asset with the highest real use potential. It added that it is the most popular development platform for smart contract applications, according to reports.

The bank did state that neither crypto asset can compare with gold as a store of value, arguing that its high volatility does not make them comparable.

Notably, it did not compare the gains between the two. So far this year, gold has declined 5.4%, whereas Ethereum has made over 215% to current levels, and that includes a 46% correction. Goldman added that the competition between different crypto assets is preventing them from becoming safe-haven assets at this stage.

"The argument that Bitcoin and cryptocurrencies are a digital version of gold does not confer any value to Bitcoin and other cryptocurrencies, because gold itself is not a consistent or reliable store of value. The Goldman Sachs Investment Strategy Group should sign off its research pieces on crypto with “Have Fun Staying Poor."

The Ethereum price will keep hovering horizontally between the $2,200 support line and the 50-day SMA around $2,250.