Ethereum managed to climb into the $1,200 zone for the first time since January 2018. There is a lack of substantial resistance barriers upfront, which should give them enough room to move into the $1,300 zone.

Ethereum Climbs By >100% In Two Weeks

Ethereum was trending around $595 back on December 24, when the bulls took control. Since then, the price rose by nearly 109% before finishing above $1,200. The Bollinger Band in the 1-day timeframe tells us that the price was going through a period of low volatility and consolidation. Since then, the volatility has gone out of control.

The moving average convergence/divergence (MACD) shows that the market momentum is getting increasingly bullish. As such, more upward movement is expected.  Looking at the 4-hour chart, we can see that the price has found support on the upward trending line.

Ethereum, quite like Bitcoin, had flashed the sell signal in the form of a green-nine candlestick in the TD sequential indicator. However, the price was able to recover after a brief dip. The relative strength index has been creeping along at the edge of the overbought zone. Hence, a temporary correction is expected.

Up next, let’s look at the levels holding the price up in IntoTheBlock’s “In/Out of the Money Around Price” (IOMAP).

There is a lack of strong resistance barriers up front, which gives ETH an easy road into $1,300. On the downside, the strongest support wall is at $1,050, wherein 337,500 addresses had purchased nearly 2 million ETH tokens. This level should be strong enough to absorb a lot of selling pressure.

As per Santiment, the number of Ethereum tokens held by the miners have hit an all-time low (excluding open ICO weeks back in 2015). 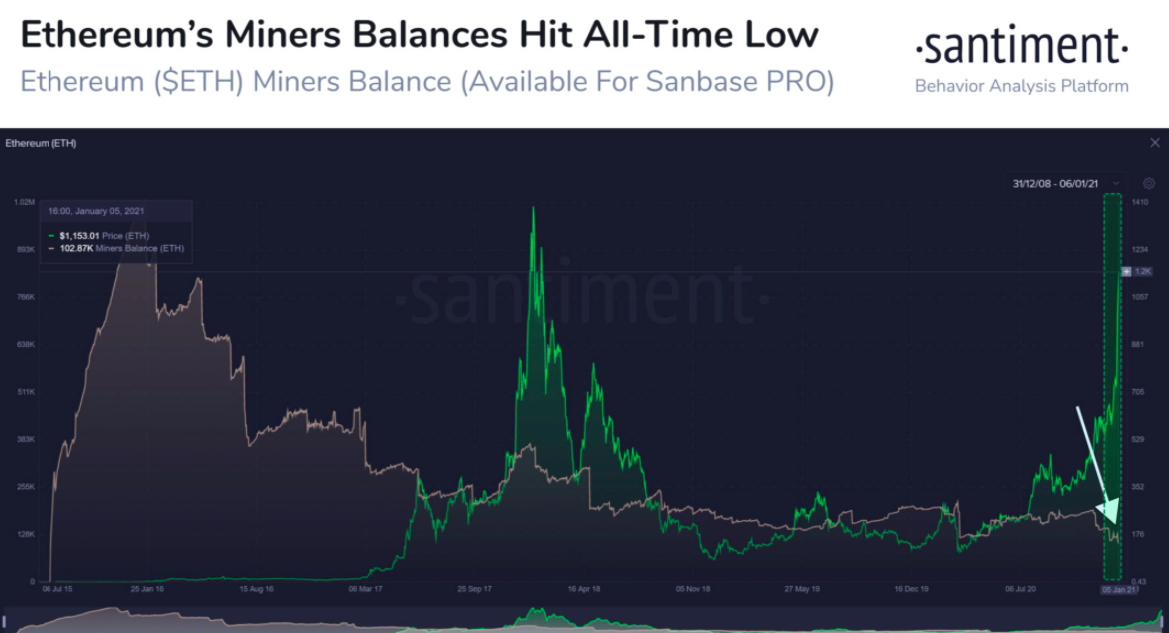 It seems like the miners have been selling off their Ethereum holdings, which is a negative sign.

BitGo has recently launched its Ethereum-based tokenized bitcoin project - Wrapped Bitcoin (WBTC) - on the TRON blockchain. According to the company’s public order books, its clients are already minting WBTC and WETH as TRC-20 tokens on TRON.

Alameda Research and CoinList wrapped and minted nearly 100 BTC as TRC-20 WBTC tokens (roughly $3.4 million) after BitGo executed a few test mints in December. According to a CoinDesk report, Alameda’s Ryan Salame said that the company minted 1 WETH on Tron just a couple of days back. The trading firm's TRC-20 WBTC and WETH mints were made to meet over-the-counter (OTC) client demand and test the new product.

According to an earlier Coindesk report, BitGo announced a partnership with TRON in September with plans to bring WBTC and WETH to the TRON network. The project is currently fully operational. Justin Sun, the CEO of TRON, said:

Our blossoming alliance with BitGo has finally brought cross-chain solutions like WBTC and WETH to fruition.

While Ether’s (ETH) price has rallied over 75% in the past 15 days, Grayscale Investments’ Ethereum Trust fell by 50% in the same time period. ETHE shares represent 0.09620794 of Ether and are roughly a 21% premium over the spot price of ETH.

Joshua Frank, the CEO of TheTie, offered a theory to explain the unusual price action. He said that institutional arbitrage may be powering Ether’s recent gains, speculating that investors are buying ETH to close out loans taken to buy shares in Grayscale’s Ethereum Trust.

He suggested that many Ethereum Trust investors borrowed ETH at an annual interest of roughly 8%, before using the borrowed assets to purchase ETHE shares at the equivalent of Ethereum’s spot price. This was done to capitalize on the opportunity presented by ETHE's historic price premium (ETHE having traded at a 100% premium over Ether in late December).

With the lock-up on many investors’ shares having expired, Frank concludes that ETHE investors are now selling their shares while purchasing Ether on the spot markets to close out their positions and realize a profit.

This is likely a large part of the reason ETH had a massive run-up this weekend, why ETHE fell today (despite ETH's massive run this weekend), and why the premium on ETHE has fallen so drastically.