Three days back, Ethereum price charted its all-time high. However, the bears have then taken back control and dropped ETH to $1,240. Let’s see what’s going on behind the scenes with the smart contract platform leader.

This Wednesday, the price dropped from $1,365 to $1,235, flipping the $1,300 line from support to resistance. The 20-day SMA has now stepped up to the plate to prevent any further downflow.

IntoTheBlock’s IOMAP shows us that the support at this zone is pretty moderate. If the sellers manage to break below the 20-day SMA, they are going to encounter strong support at $1,160. Previously, at this level, 575,000 addresses had purchased 5.7 million ETH tokens. This line is strong enough to absorb a lot of selling pressure.

The 4-hour chart shows us that ETH had been charting a series of lower highs and lower lows after forming the double top pattern. Following this rejection, the Ethereum price managed to flip the 20-bar and 50-bar SMA from support to resistance.

Ethereum whales have recently moved a whopping $1.6 billion worth of Ether (ETH) from exchanges, according to a Twitter whale bot that tracks large whale movements. Glassnode also noted that leading exchanges are recording a 15-month low of 15.4 million ETH in balance.

It is unclear as to who moved the withdrawn ETH to anonymous wallets. As per a Zycrpto report, quantum economist analyst Pedro Febrero suggested a reason for the massive ETH transfer by ETH whales. He said that it could be due to Ethereum “being locked in Defi”. However, only around 0.1 million ETH was recorded on DeFi on the day that the aforementioned amount left the exchanges, leaving Febrero’s analysis questionable.

In a follow-up response, he reportedly said that perhaps “the number of ETH locked in the beacon chain (PoS) grew by more than 320% since December 2020.” According to the staking statistics, this analysis is more accurate.

In our opinion, we think this means the price of ether has a greater chance of moving up. The less ether is available at exchanges, the more likely is the price to rise.

Santiment, an on-chain analytics platform, shared a chart showing that the exchange supply metrics continue to paint a bullish picture despite the price action. 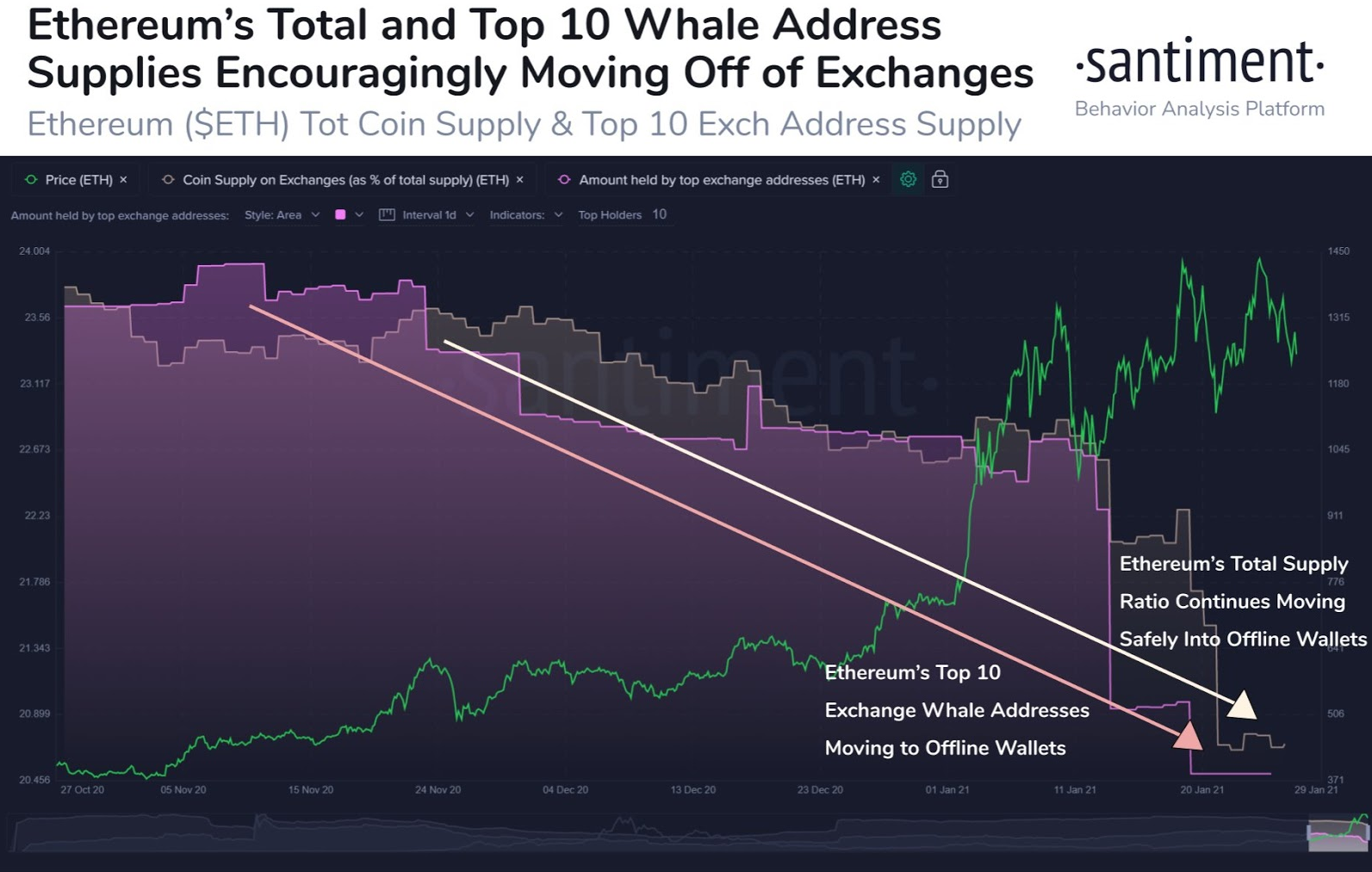 It seems like the ratio of $ETH tokens on exchanges, as well as the tokens held by the top 10 whale exchange addresses, now sit at a 26-month low. This means that people are moving their tokens from the exchanges to off-chain cold wallets, which is a very positive sign since it shows that they are not looking to sell their coins.

If the bears manage to break below the 20-day SMA, Ethereum price is expected to reach the $1,160 support line. This line seems robust enough to absorb a lot of selling pressure.