While the buyers have been in control for 10 days out of the last 12, it looks like they were able to make the most of it this Sunday when they pushed the price from $775 to $980. This was the single most bullish day that Ethereum has had in quite some time. However, in the princess, the RSI has jumped into the overbought zone, which shows that the asset could be possibly overpriced. This could initiate a price correction.

The 4-hour ETH/USD chart gives us a better narrative of what’s going on behind the scenes. The band narrowed considerably between December 30 and January 2. Following this period of consolidation, there was a phase of rapid expansion, wherein the price exploded up. The moving average convergence/divergence shows increasing bullish momentum. So more movement is expected.

Cryptocurrency intelligence platform Santiment recently noted that the number of addresses holding over 10,000 ETH has surged in the last two months. The company added that addresses that own 10,000 ETH or less have decreased over the same period. 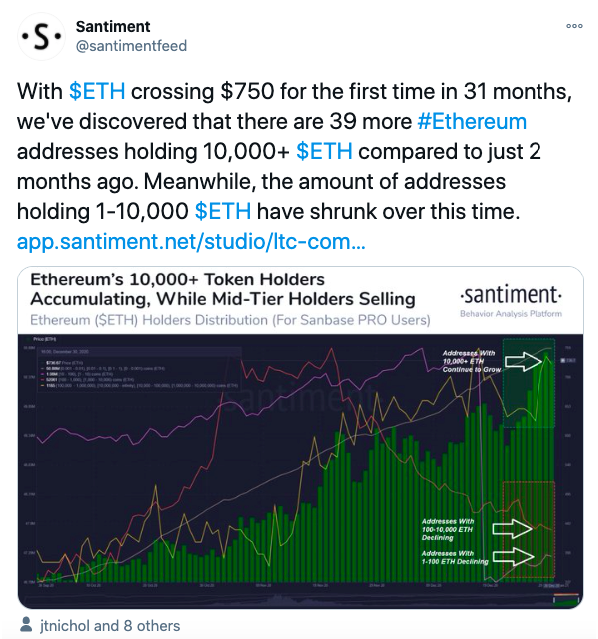 Santiment’s data also indicates that the number of addresses holding 1-100 ETH fell on December 19th. The firm further noted that a problem related to decentralized finance (DeFi) could have ignited this sharp decline.

“This massive drop from two weeks ago from this group surprised us, too. It could very well have been a DeFi-related anomaly, considering just how big the drop-off was.”

As of now, most investors will be hoping for the $1,000 psychological level to hold strong. The last thing they will want is for holders to sell-off and cash-in around this level. If they manage to hold on, the buyers will attempt to break above the all-time-high level at $1,432.88.