Over the last 48 hours, the Ethereum price has dropped from $1,915 to $1,798, losing almost $120 in overall valuation. So is it all doom and gloom or is there hope around the corner? Let’s take a closer look with technical analysis.

In the daily Ethereum price chart, the 50-day SMA has crossed over the 20-day SMA to form a bearish cross pattern. This could tell us that a further drop in ETH is expected. However, also note that:

On the downside, there is a robust support level at $1,715, wherein 261,000 addresses had purchased over 9 million ETH tokens.

When we note Santiment, an on-chain analytics platform, we can see that the number of addresses in the Ethereum network is growing progressively. 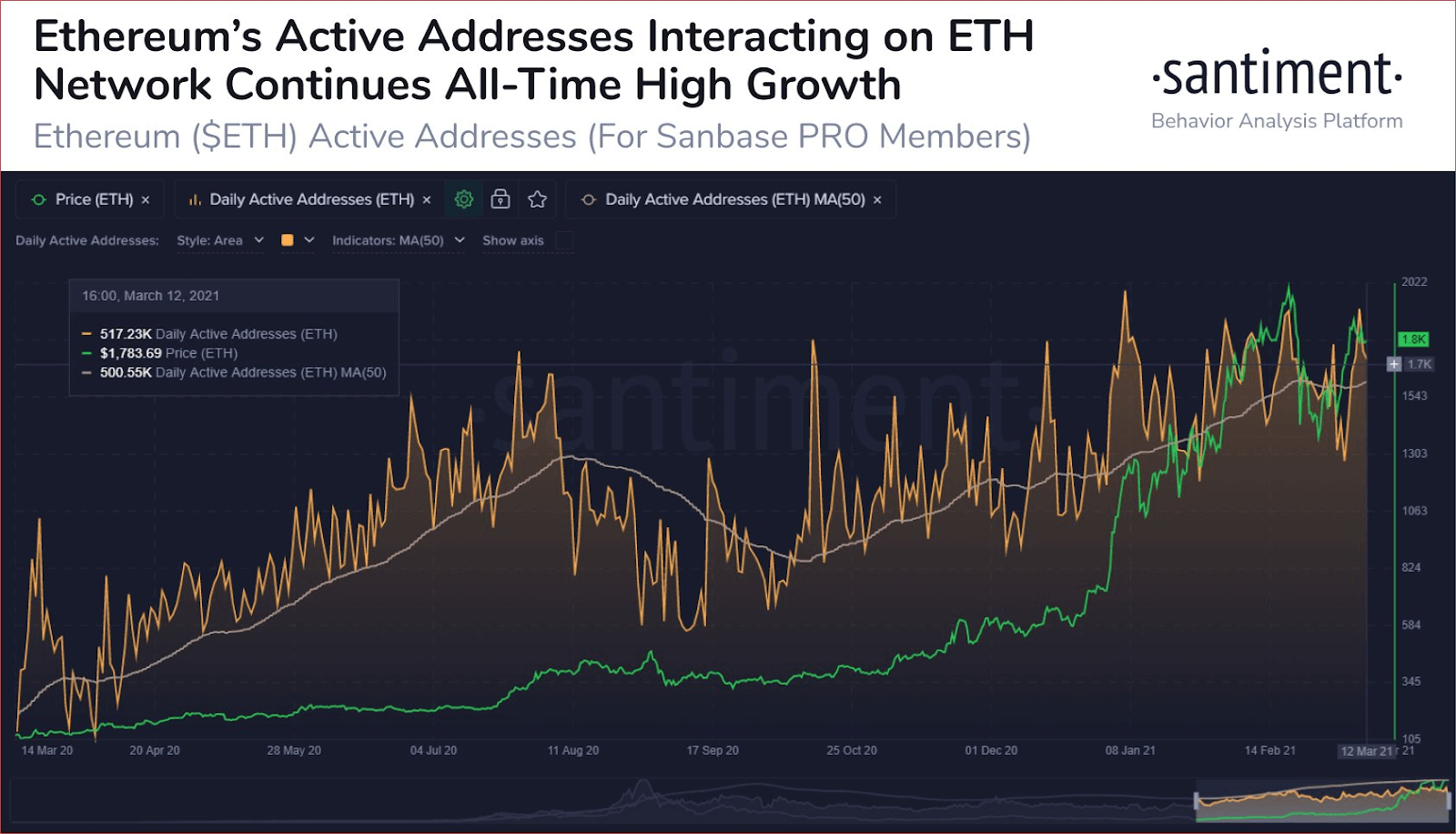 "To the surprise of few, #Ethereum has been growing in utility. Currently just -7.1% off of its $2,030 #AllTimeHigh three weeks ago, a continued rise in daily active addresses would imply a high likelihood of an inevitable retest of this historic mark."

The new Ethereum Improvement Proposal (EIP) 1559 has received mixed reactions from the crypto community in recent times. Some people are looking at the proposal as a means to cool the tensions between Ethereum’s miners and developers. However, EIP appears to have obtained little support from the community at large.

EIP-1559 is an upgrade that aims to discipline Ethereum’s volatile fee market while affecting miner revenues. It proposes for block rewards to immediately be increased to three ETH and then reduced to one ETH over the two years following 1559’s implementation. This would ease the impact of Ethereum’s transition to Proof-of-Stake on miners.

ETH developer Tim Beiko recently encouraged a debate over the proposal within the Ethereum community. He suggested EIP 3368 as a “counter proposal” to1559. He called the former “the most tangible thing to come out of miner conversations [regarding 1559] in the past few weeks.”

“Coming out of my twitter break to share this: miners' "counter proposal" to 1559 is EIP-3368, which would raise the block reward to 3 ETH and lower it to 1 ETH over ~2 years...To be clear, this EIP is not accepted/scheduled for a fork/etc. yet. It's only been proposed and seems like the most tangible thing to come out of miner conversations in the past few weeks.”

Several mining pools have long resisted EIP-1559. However, following the news about the upgrade being scheduled for deployment in July, many miners threatened to organize a “show of force” in which they would divert their hash power to a single pool for 51 hours.

In response to EIP-3368, Red Panda Mining, a crypto miner who was among those pushing for a miner rebellion, pledged their support for the proposal and announced that they will “rescind from the show of force.”

“We have been heard. EIP-3368 has been proposed. Reward to 3 ETH but drops 0.25 every quarter till 1 ETH over 2 years. I am going to rescind from the show of force to @etherchain_org April 1st and so should all of you (unless you were already on ethermine).”

Discussions regarding EIP-3368 on the Ethereum Magicians forums show that the Ethereum community is very divided. User “green” described the proposal as “a subsidy of users to miners to delay impending change.” They added:

Other forum users emphasized efforts from Ethereum’s core devs to expedite the existing network’s chain-merge with Ethereum 2.0. They believe EIP-3368 is delaying the inevitable. Investor and project advisor who goes by the name “DCInvestor” said:

Further, accommodation of this form only delays the inevitable as we move swiftly towards a merge of eth1 and eth2, where PoW mining rewards will be zero. IMO, we should avoid measures which encourage further investment in mining hardware by miners given this reality.

Ethereum price will likely drop to $1,715 and then bounce back up.