Ethereum bears have remained in control for three consecutive days. During this timeframe, the price crashed from $1,285 to $1,077. This is the first time the sellers have been in control for three straight days since November. Let’s see what’s going on behind the scenes.

With more than $200 lost in valuation over the last three days, Ethereum is on a seemingly downward spiral. This Monday, the price dropped to intraday lows of $900 before it bounced up from the support provided by the 20-day SMA.

Two signs show us that the price may drop even more. Firstly, the parabolic SAR has reversed from bullish to bearish. Secondly, the MACD shows that the market momentum is on the verge of switching from green to red. Both these indicators show that the overall sentiment is overwhelmingly bearish.

Things become really scary if you look at IntoTheBlock’s IOMAP. There is a distinct lack of strong support zones on the downside. Looking at the daily chart, the nearest support level of note is at the 20-day SMA ($925). 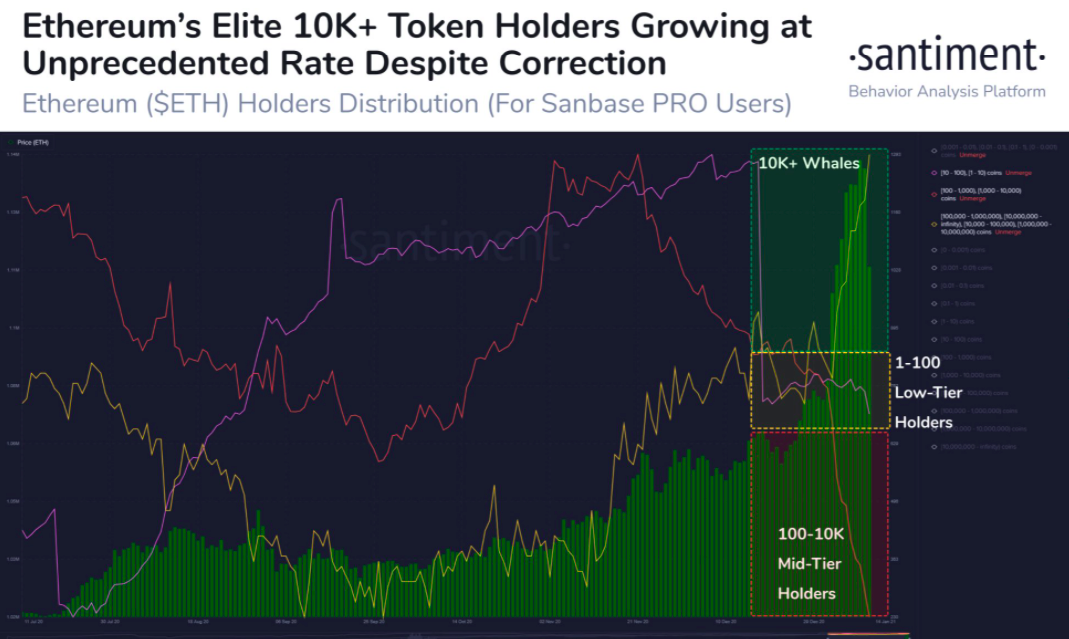 Santiment is an on-chain behaviour analytics platform. They recently tweeted out the above image. As per the graph, the number of addresses holding at least 10,000 ether tokens jumped from 1,171 to 1,220 in the past 2 weeks. This is a +4.2% rise. This is a pretty positive sign since the whales are not adding to the buying pressure.

Dan Tapiero, a renowned global macro investor, has said that Ethereum (ETH) is set to surge as institutional investors have their eyes set on the second-largest digital asset by market cap. In a recent episode of The Breakdown with Nathaniel Whittemore, Tapiero said that the amount of stimulus pumped into the money supply has drastically changed the financial sector.

...if you add up all of the fiscal and monetary stimulus that was done and try to put a value on it this year, you’re looking at an amount of over $30 trillion of stimulus was put into the world economy. That’s one and half the size of the US economy injected in the world so I don’t think we even understand yet what the ramifications are.

The fact that Northern Trust, which is a very staid, very traditional custodian, has come out and said that they’re going to custody cryptocurrency. Now, they have $13 trillion of assets in custody and $1.3 trillion in assets under management, and so what could happen? So they’re custodying Bitcoin and Ethereum, so I think that if we start to see that, you might really start to have another leg under Ethereum, and again Ethereum has outperformed Bitcoin this year and there’s a lot of rocket fuel there…

Ethereum is not digital gold. It’s something completely different… If Northern Trust is going to custody Bitcoin and Ethereum, that means they have clients that want to buy both of them.