Ethereum price has managed to chart nine consecutive green candlesticks between April 25 and May 3. During this upward surge, ETH jumped from $2,200 to $3,300, gaining a staggering $1,100, in the process. However, the bears finally stepped in to bring some sensibility back into the market.

Having nearly reached the $3,500 psychological level and the $400 million market cap, the bears stepped back in to correct the Ethereum price. As per the relative strength index (RSI), ETH is presently overbought and may face further correction.

On the downside, there is a robust support wall at the $2,925 wherein nearly 180,000 addresses had purchased a little less over 1.9 million ETH tokens.

Ethereum Chatter On The Rise

Ethereum Whale Balance On The Rise 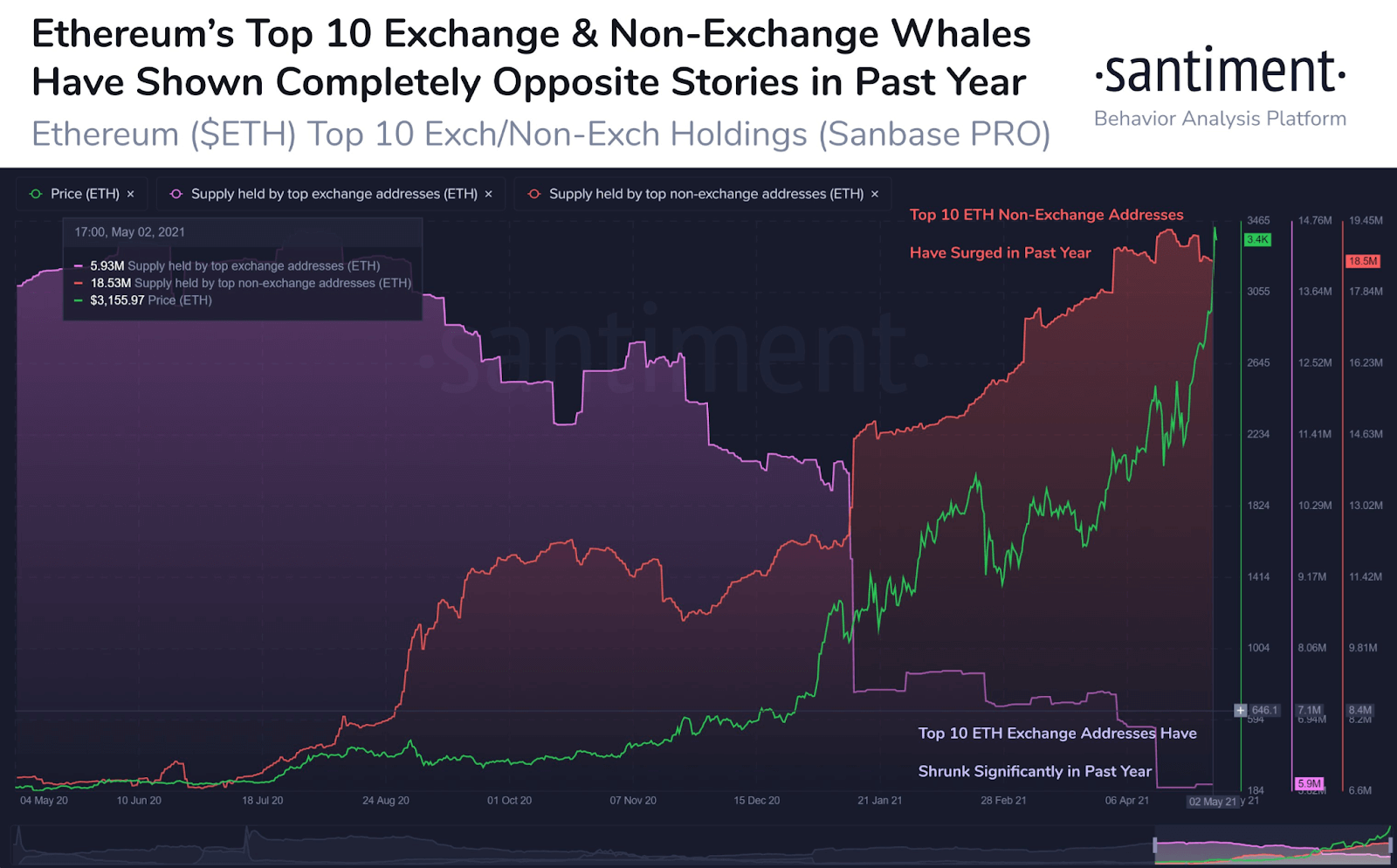 “#Ethereum touched yet another #AllTimeHigh of $3,524 a few hours ago before dropping on a mild market-wide correction. Top 10 non-exchange whale holdings have doubled in the past 8 months, while the top 10 exchange whales halved in the past 7 months."

Ether (ETH) options worth $470 million are set to expire on May 7. Almost all of the 75,909 sell options contracts will become worthless if Ether manages to stay above $3,100 until Friday 8:00 am UTC.

The growth of the decentralized finance (DeFi) has fueled ETH's price action greatly. The DeFi sector has recently surpassed $60 billion in total value locked, according to DeBank. Yat Siu, the co-founder of Animoca Brands, said:

DeFi will shape finance in incredibly fundamental ways. Perhaps the biggest way (including in China) is in financial education.

Regarding May 7's options expiry, the neutral-to-bearish puts (sell) currently have a $250 million open interest but tend to become worthless as the settlement day approaches.

While the apparent put-to-call ratio favors the more bearish ETH put options by 13%, when analyzing the target price (strike) for those derivatives, the activity above $3,100 is nonexistent. Ether's 55% rally over the past month caught bears by surprise as the protective puts mainly focused on $2,800 and lower.

On the other hand, bulls are usually highly optimistic. The call option contracts have a 66,350 open interest ($220 million). Currently, 13.5% of those neutral-to-bullish options contracts have strikes of $3,200 and higher.

However, considering that the call options completely dominate above $2,700, bulls have incentives to positively pressure the price as the expiry date inches closer. Unlike futures markets, there are few benefits to rolling over contracts that are now almost worthless.

As shown above, the $2,450 and lower-strike ETH put options are offered below $10 each. Meanwhile, some of them don't have any bids at all.

The buyers will hope to take back control and reconquer the $3,500 psychological level.