The Ethereum price jumped up from $1,800 to $2,285 between June 26 to June 30. During this climb, ETH managed to reverse the parabolic SAR, 200-day SMA, and 20-day SMA from bearish to bullish. However, following these five bullish days, the bears stepped back in for a price correction, wherein ETH dropped to $2,115 on July 1 and flipped back the 20-day SMA to resistance. However, as it turns out, this correction was short-lived.

Ethereum Price Has Three Bullish Sessions In A Row

Following the July 1 crash, Ethereum price has strung together three consecutive bullish sessions during which it rose from $2,090 to $2.350. In the process, the buyers successfully reclaimed the 20-day SMA as a support level. The MACD shows increasing bullish market momentum, so the bulls should easily take down the 50-day SMA.

Recent Santiment data has shown that the amount of Ether (ETH) held by crypto exchanges is currently at its lowest level in more than two and a half years.

The crypto analytics firm noted that this drop is bullish for the second-largest cryptocurrency.

“Dropping below 18% for the first time in 31 months lowers the risk of a future major sell-off.”

Santiment also noted that Bitcoin is witnessing a similar situation, albeit over a shorter time frame.

“Following Bitcoin’s mid-May dip, the supply of BTC sitting on exchanges has steadily fallen back down and locked away for safekeeping by HODLers (hold on for dear life). This is a good sign for bulls, as funds moving away from exchanges lowers the risk of major sell-offs.”

Santiment added that the amount of Ether in the hands of large investors recently reached the highest level in nearly four years. 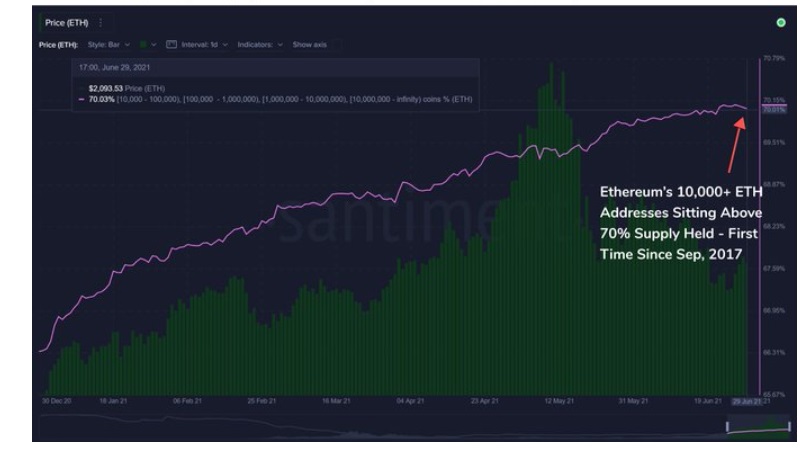 It also noted that Ethereum’s address activity had exceeded Bitcoin’s last week for the first time as its price rebounded from levels last recorded in March.

The crypto analytics firm mentioned that the increase in Ethereum’s address activity had caused a noticeable rebound in the prices of altcoins.

“Altcoins have enjoyed quite the major resurgence over the past 36 hours or so. Much of this can be attributed to ETH’s address activity pop that saw it surpass event BTC’s.

The buyers currently have the market momentum required to take down the 50-day SMA. If they manage to do that, ETH should reach the $2,600 psychological level.