Between March 25 and April 15, the Ethereum price jumped from $1,570 to $2,500, gaining almost $1,000 in overall valuation. During this upward surge, ETH managed to flip the 20-day and 50-day SMAs from resistance to support. However, between April 16, the bears have taken full control of the market for four straight days, wherein it dropped to $2,165.

The buyers bounced up from the 20-day SMA and pushed the Ethereum price up by $200 and is currently valued around $2.385. ETH is currently aiming for the $2,400 line. However, MACD and the parabolic SAR both show that the market sentiment is negative.

On the upside, the Ethereum price faces a strong resistance barrier at $2,300 wherein 49,000 addresses had purchased over 8 million ETH tokens. 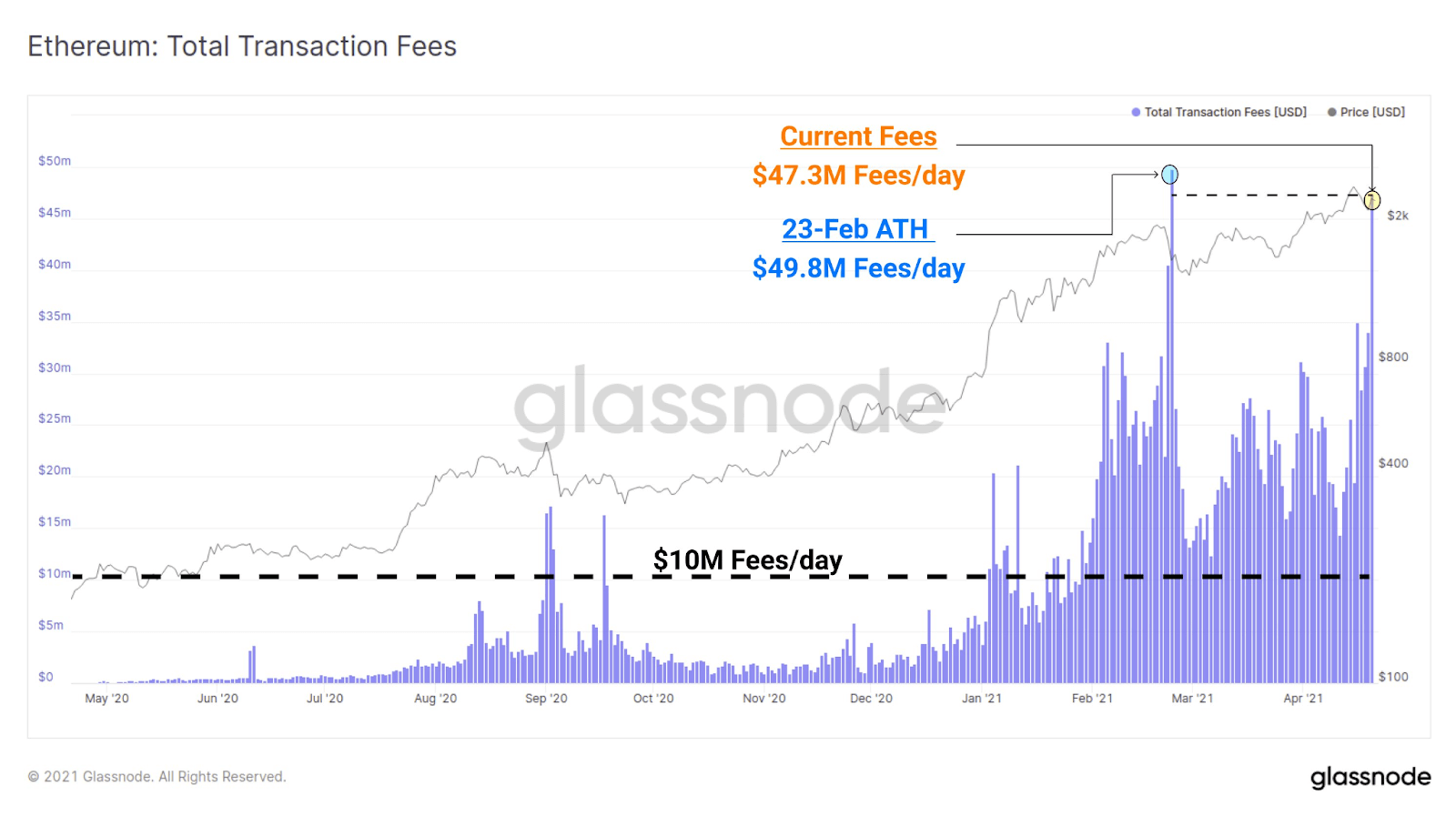 Glassnode shared the above image along with the following tweet:

Coin Bureau: Ethereum To Shatter $4,000 by End of July

Famous crypto trader and analyst Coin Bureau explained why Ether (ETH) would hit the $4,000 level by the end of July. In a recent video, the trader, known as Guy, commented on the massive rise in the number of active addresses on the Ethereum network.

Recently the Ethereum network demand has been surging. You only need to take a look at the total number of active addresses on the network. As you can see, this is at an all-time high of over 580,000 addresses.

Guy said that the surging demand for the Ethereum network could be attributed to three main factors - decentralized finance (DeFi), stablecoins, and NFTs. All three spaces, which are growing exponentially, rely on Ethereum, creating a significant need for the blockchain network. The trader also highlighted the relationship between the amount of ETH leaving exchanges and the amount getting locked up inside smart contracts.

That’s right, it’s almost as if they have a perfect inverse relationship. Money flowing off the exchanges tends be to heading toward smart contracts.

Apart from Ethereum’s growing demand and ecosystem, Coin Bureau noted that the highly-anticipated EIP 1159 upgrade is coming up, and it could potentially ignite ETH’s ascent to greater heights. EIP 1159 seeks to make the Ethereum network more cost-efficient.

If the Ethereum developers are able to effectively push EIP 1559 in the London upgrade, then we could easily see ETH above $4,000 by the end of July.

The buyers will need to push the Ethereum price above $2,400 resistance barriers to reach the $2,500 psychological level again.