After ETH failed at the $615 resistance, it managed to drop down to $545 over the last eight days. However, multiple indicators suggest that a further downturn is expected. Let’s do a quick technical analysis to understand better what’s going on behind the scenes.

The last four sessions in the daily chart have been trending below the 20-day SMA. As we mentioned yesterday, the price has formed an inverted Adam and Eve pattern. Going by technical analysis, the downside target for the price is $420. The MACD shows increasing bearish momentum, which adds further credence to our bearish hypothesis.

Another interesting factor is that the Bollinger Band in the daily chart has stopped its contraction. This means that the price has entered a period of high volatility. So, one may expect larger price swings.

The monthly chart has already flashed the sell signal with a green-nine candlestick in the TD sequential indicator. This is called a sell signal because the price tends to go on a downtrend after flashing this sign.

Institutional investors remain unfazed by the reducing prices as Grayscale added a whopping 131,254 ETH tokens to their holdings. This has boosted its total funds under management (AUM) of Ethereum, held by Grayscale, up to $1.66 billion. 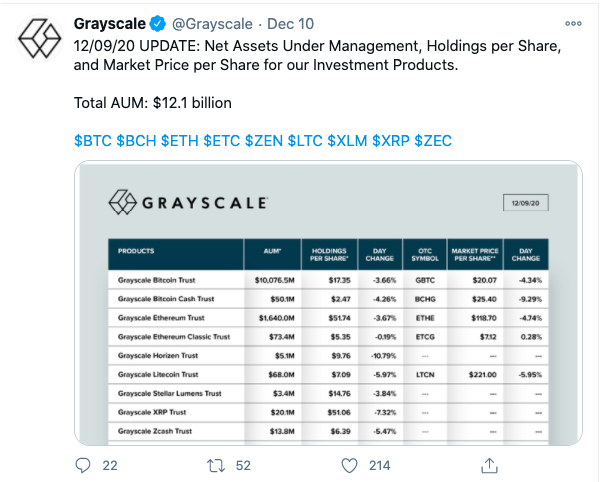 This officially makes Grayscale the world's biggest crypto hedge fund manager. Prior to this, the company's Ethereum holdings stood at $1.64 billion.

Over 100,000 ETH has been locked away in ETH 2.0, staking through Kraken. Other well-known cryptocurrency trading outfits that have announced their support are Binance and Huobi. Coinbase and OKEx will be joining the list soon. This is a highly positive sign as this opens the gateway for millions of crypto users to participate in Ethereum's staking.

If the Adam and Eve pattern is fulfilled, the 50-day SMA ($490) automatically becomes the most crucial level. This level should be strong enough to stop the downflow. However, if this level doesn’t hold firm, we can expect the price to reach the $420 target and then drop to the 20-bar SMA ($275) in the monthly chart.

Ethereum
Ethereum Forecast
Top Brokers in
All Regulated Brokers
67% of retail clients lose money when trading CFDs with this provider.