Filecoin is flying the bullish flag above the cryptocurrency horizon on Friday. Data by CoinGecko shows a 24% breakout in 24 hours. The accrued gains occurred while most crypto assets wallowed in losses. For instance, Bitcoin is down from $39,000 to slightly above $36,000. Ripple is back to trading under $1 while Ethereum’s bulls are battling to secure support above $2,600.

Filecoin eyes the next liftoff to $110

Filecoin lost around 78% of its value from the all-time high of $236 in May’s crash. The massive drop left many retail investors wounded. Support at $50 played a critical role, preventing losses from gaining traction.

The reflex recovery that followed could not push the price above $100. Instead, Filecoin retreated to secure higher support at $60. On the upside, sellers concentrate at $80, forcing FIL to settle for consolidation.

A break above the upper range limit ($80) on Friday resumed the uptrend. More buyers have been attracted to the market amid improving investor sentiment.

In the meantime, the FIL trades at 91 moments after pushing the 50 Simple Moving Average into the rearview. A four-hour close above this level will validate the impending upswing to the next crucial hurdle at $110, as highlighted by the 100 200 SMA on the 12-hour chart. 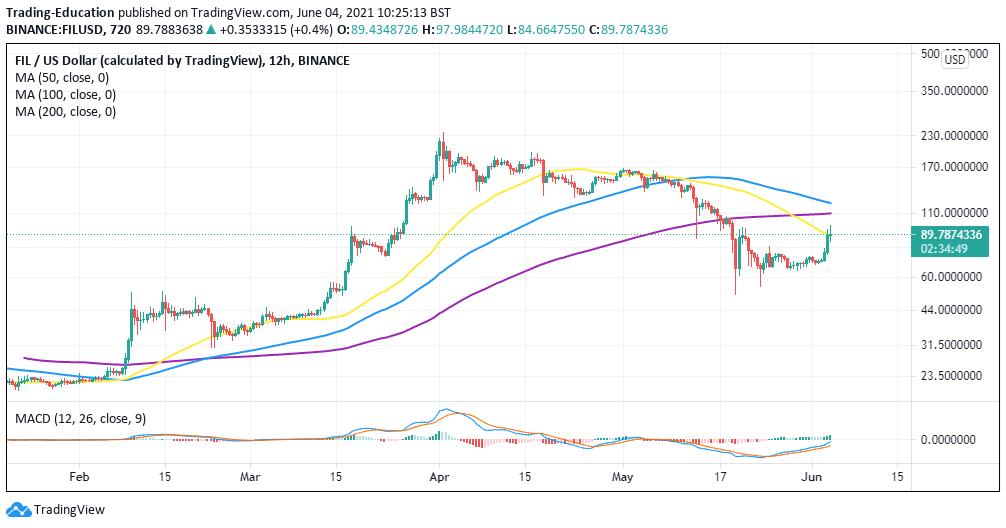 The same 12-hour chart affirms the ongoing uptrend based on the Moving Average Convergence Divergence (MACD) indicator. Following the dip under the mean line in May to -16, the trend momentum indicator seems to regain ground and close the gap to the positive areas.

Besides, the MACD line recently crossed above the signal. As the divergence between these two lines widens, the bulls get more aggressive, adding props to the upswing.

A 12-hour close above the 50 SMA is needed to affirm the uptrend toward $110. However, if Filecoin loses this immediate support, we will likely see a correction come to play. Apart from the support at $80, the former lower range limit at $60 is in line to prevent declines from extending to $50.

Filecoin
FIL
Top Brokers in
All Regulated Brokers
67% of retail clients lose money when trading CFDs with this provider.