Filecoin staged a rally after the crash to $55 in May. Buy orders multiplied after slicing through the resistance at $72. Fil was catapulted significantly upward and came close to brushing shoulders with $100.

Minor retreats characterized the first week of June to $85 but a sideways trading action dominated. Nonetheless, the bearish wind sweeping across the market on Tuesday resulted in another downswing.

Short-term support has been established at $72, accentuated by the 100 Simple Moving Average (SMA) as shown on the four-hour chart. Filecoin trades at $77 when writing as bulls focus on an immediate recovery above the support turned resistance at $85.

Filecoin rising against all odds

Filecoin bulls concentrate on recovery ignoring the bearish outlook of the Moving Average Convergence Divergence (MACD) indicators. Following the downswing from highs near $100, the momentum trend indicator began retreating toward the mean line (0.00).

The MACD presents both bearish and bullish signals. Therefore, traders look out for the MACD line crossing above the signal line for a call to buy, but when the MACD line is striking beneath the signal line is a call to sell. Moreover, the indicator moves from the positive region to the negative area, implying a bearish outlook.

The MACD has a massive bearish outlook, as shown in the chart, but bulls give a blind eye and focus on recovery. Perhaps a daily close above the 50 SMA will affirm the uptrend aiming for highs above $85. 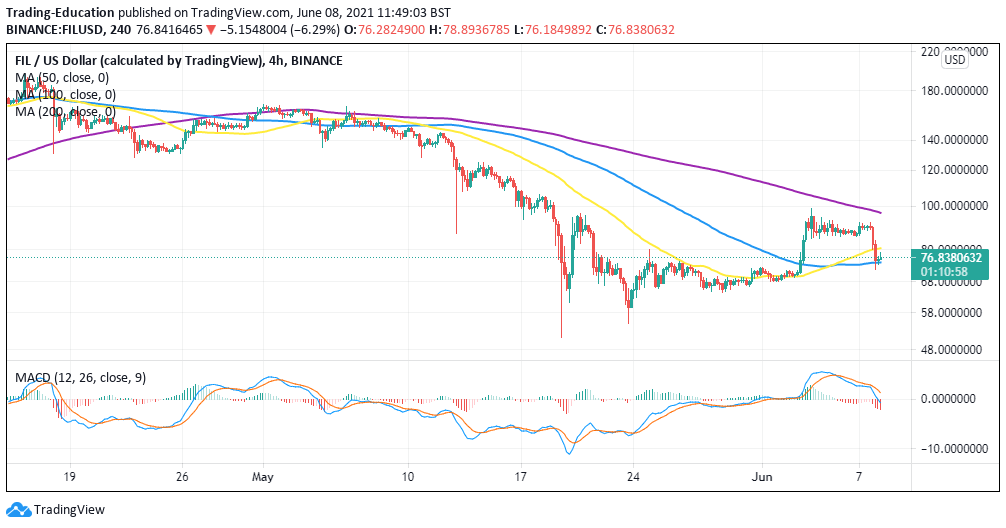 A recently formed golden cross pattern adds weight to the bullish narrative. This technical pattern comes into the picture when a short-term moving average crosses above its longer-term moving average. For example, the four-hour chart shows the 50 SMA above the 100 SMA, inferring that bulls will continue to have the upper hand in the upcoming sessions.