IOTA Price Forecast: IOTA at the Initial Stage of a Colossal Takeoff to $1.66

IOTA suffered in tandem with other cryptocurrencies amid the freefall in May. The Tangle technology-based token dropped from highs around $2.5, only to secure support at $0.75. This dent spooked most investors who had been anticipating gains toward $5.

A recovery came into the picture, allowing buyers to speculate immense gains above $2. However, a barrier at $1.4 remained unshaken and prevented further upward price movement. Meanwhile, IOTA started to consolidate as market indecisiveness dominated. According to the overall technical picture, IOTA is ready for another breakout to close the gap heading to $2.

The four-hour chart illustrates the formation of a symmetrical triangle. This chart pattern is molded by converging two trend lines that link a series of sequential peaks and troughs.

Generally, the lines are supposed to cross at an approximately equal point. As mentioned, the formation brings to light a period of consolidation. Notably, the symmetrical triangle has both a bullish and a bearish impulse.

Symmetrical patterns tend to have exact price targets for the breakout or breakdown, mainly measured from the highest point to the pattern's lowest point. Note that IOTA has already cracked the upper trend line resistance. This means that the bullish impulse is in play and could see IOTA swing 48% higher to trade at $1.66. 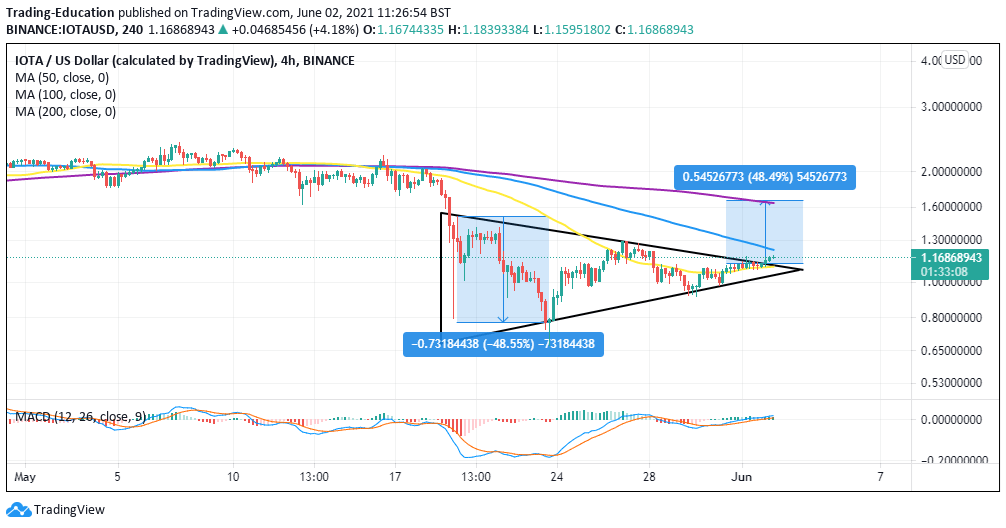 The uptrend has also been reinforced by the four-hour chart Moving Average Convergence Divergence (MACD) indicator. As highlighted, the MACD is back in the positive region, adding credence to the bullish outlook.

Besides, the MACD line (blue) sustains the divergence recently achieved above the signal line. If the technical picture remains unchanged, the path with minor hurdles would be upward.

IOTA
MIOTA
Top Brokers in
All Regulated Brokers
67% of retail clients lose money when trading CFDs with this provider.