Irrational Exuberance: This Invaluable Classic Is As Relevant As Ever

Irrational Exuberance by Nobel Prize-winning economist Robert Shiller is now in its third edition and is as relevant as ever. A study of market psychology and its effect on price movements, it gives a detailed insight into some of the forces that drive unsustainable price increases, or financial bubbles, and investigates some of the factors that could help investors to predict stock market behaviour.

This Trading Education article will give you a short look at this invaluable finance book.

Shiller, Professor of Economics at Yale and a regular contributor to the Economic View, begins with a detailed rundown of historical examples of high speculation and sudden declines, including the infamous great crash of 1929 and the great recession following the financial crisis of 2008, as well as the peaks and troughs experienced in 1901, 1966 and 2000. He concludes that the instability of the stock market cannot be explained by fundamental drivers while asking why seemingly disparate markets, from New York to Frankfurt, move together. 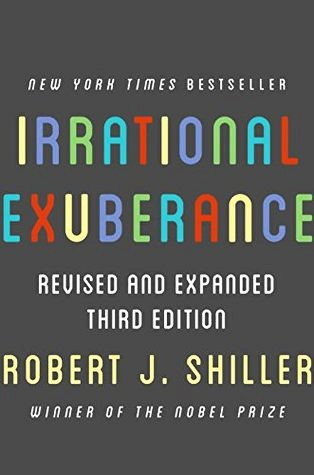 The book aims to discover some science in the circumstances around financial bubbles, highlighting how aspects of investor 'herd mentality' and the proliferation of success stories can create a kind of feedback loop which drives price inflation out of control. A thorough discussion of political, sociological and structural factors surrounding the phenomenon of financial bubbles gives readers an insight into the real-world effects that influence market behaviour.

Shiller details the Cyclically Adjusted Price-to-Earnings (CAPE) ratio, which aims to create a stable valuation of a company while taking into account inflation and other macroeconomic forces. Notably, over the last century, the CAPE has peaked just as the market peaks, making it a potentially reliable signal as to when a financial bubble is about to 'burst', which invaluable information for all kinds of investors.

When Alan Greenspan first coined the phrase "irrational exuberance" in 1996 to describe the 1996 boom and the mentality that drove it, he was calling into question decades of argument that backed the seemingly inherent rationality of market behaviour. Shiller took this idea that there may be other, far more human factors that drive prices and lead to the kind of over-inflated prices we see during every economic bubble. In fact, in many ways, he threw out the idea of market rationality altogether, instead demonstrating how bubbles were a result of “the combined effect of indifferent thinking by millions of people…motivated substantially by their own emotions, random attentions, and perceptions of conventional wisdom.”

Irrational Exuberance was a New York Times bestseller from its first release, and this up to date edition adds to its groundbreaking revelations with brand new material and current insights including a whole new chapter on the bond market.

Having previously raised the alarm for the dot com and housing bubbles, Shiller is now warning that indications of irrational exuberance can once more be observed among investors despite the repercussions of the subprime boom that precipitated the 2008 financial crisis. As stock prices rise in the US and house prices increase across many parts of the globe, this current boom could prove to be another example putting paid to the idea of market rationality and adding weight to Shiller's theory that market volatility is psychologically-driven phenomenon inherent to asset markets.

See also: The Enigma J Paul Getty, The Richest Man in The World

Business Insider listed this third edition of Irrational Exuberance among its top must-read books on markets, calling it one of 'the most important finance books', stating "As we all, ordinary Americans and professional investors alike, crawl from the wreckage of our heedless bubble economy, the shrewd insights and sober warnings, and hard facts that Shiller marshals in this book are more invaluable than ever."

The book's clear explanations for irrational exuberance make it ideal not only for stock market enthusiasts but also suitable for the general reader. Trading Education recommends all those seeking insights into the real-world drivers behind financial bubbles read the updated and expanded edition of this classic book. For more information on trading or the stock market contact one of our experts today, we'd be happy to hear from you!

Don't miss: 8 Questions to Answer Before You Make an Investment