Kusama has, since the crash in May, led the recovery among altcoins in the market. The token secured support around $210 before bulls more than doubled its value in two weeks. At the time of writing, Kusama trades at $495 after a sharp breakout from this week's anchor at $340.

The 4-hour chart displays a symmetrical triangle. This chart pattern is molded by joining a couple of trend lines. These lines link sequential peaks and troughs as the asset consolidates following a significant movement.

Generally, the trend lines are supposed to cross at an approximately equal slope. Either a breakdown or a breakout is expected to come from the symmetrical triangle.

Realize that a breakdown beneath the ascending trend line and ascertains the beginning of a downtrend. On the other hand, a breakout happens above the descending trendline and denotes the start of a bullish trend.

Symmetrical patterns tend to have precise price targets for the breakout or breakdown, mainly measured from the highest point to the pattern's lowest point. Moreover, the breakout, such as the one illustrated as Kusama lifted to the current price levels, is characterized by a spike in volume. If bulls sustain the uptrend, KSM will rise to $750, fulfilling the breakout target. 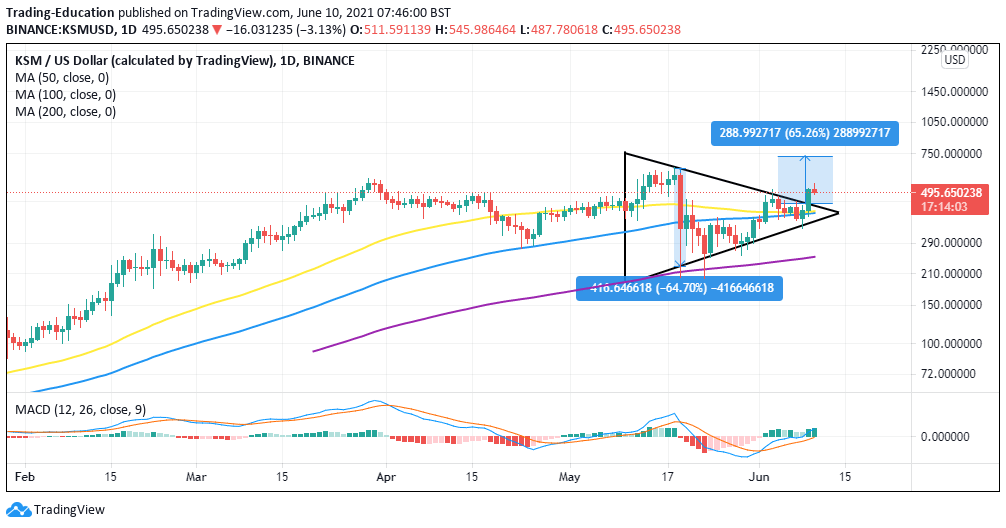 The Moving Average Convergence Divergence (MACD) on the four-hour chart has a vivid bullish outlook. A buy signal flashed when the MACD line (blue) crossed above the signal line. The narrative was later accentuated by the indicators crossing above the zero lines into the positive region. If the technical picture remains the same, Kusama will acclimate to the symmetrical triangle target at $750.

Kusama is trading marginally under $500 (an immediate resistance). A daily close is needed above this level to ascertain the uptrend. On the other hand, overhead pressure could surge if bulls fail to make more progress in the coming sessions.

Short-term support is expected at $450, but Kusama will dive to seek refuge at the 50 SMA and the 100 SMA if push comes to shove.

Kusama
KSM
Top Brokers in
All Regulated Brokers
67% of retail clients lose money when trading CFDs with this provider.