Over the last six days, the Litecoin price has been stuck below the 20-day SMA. The Bollinger had been continually narrowing to indicate decreasing volatility. However, over the weekend, the Band has started to expand to show increasing volatility. The relative strength index (RSI) tells us that the buyers and sellers are cancelling each other out.

Looking at Into The Block’s IOMAP, the Litecoin price has good support at the 20-day SMA ($135). As per the IOMAP, nearly 185,000 addresses had purchased almost 3 million LTC tokens here.

Crypto Trader: Here Is What Litecoin Price Downfall Teaches About The Lifespan Of Altcoins

Crypto trader “CryptoDonAlt” recently took to Twitter to share their observations about Litecoin's performance. The token has been underperforming amongst its peers over the years. A chart showing the four years performance timeline of the altcoin reveals that against Bitcoin and Ether, the altcoin has dipped significantly. 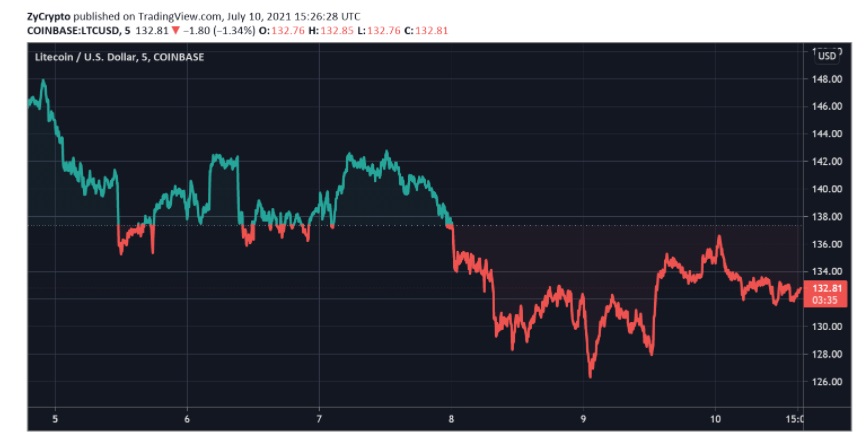 In terms of price performance, Litecoin (LTC) lost around 70% of its value in May after hitting an all-time high of $413.91. The analyst shared the following chart. 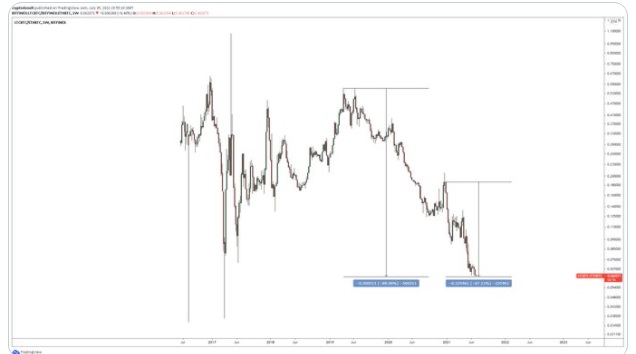 LTC has objectively underperformed most of its peers in the last few years so I thought noting that LTC had fallen out of favor was a fair thing to say. Thanks for sharing your opinions anyway, it's an interesting discussion.

In 2017, Charlie Lee revealed that he had sold his Litecoin holdings at an average price of $205. The market did not respond quite well to the revelation, as it seemed like he was giving up on his own project, which could have swayed a lot of selling decisions during that period. Lee added that he would donate the rest in the future, and continue to work on the Litecoin project regardless. But community members are still not convinced that the project has sustained any major growth since 2017.

"It [LTC] isn’t used for anything – close to zero economic activity, no network effects, pointless. Its core purpose is served better by bitcoin and its spot as #2 was replaced by ethereum."

For DonAlt, altcoins are just temporary and will continue to be replaced by other newcomers. They said:

“I think altcoins are always going to come and go as soon as better competitors come around but wondering what you guys think.”

Having managed to flip the 20-day SMA from resistance to support, Litecoin price will now want to reach the $140 resistance barrier.