Between April 26 and May 9, the Litecoin price bounced up from the 50-day SMA and jumped up from $225 to $388. However, LTC has since encountered resistance at the upper Bollinger Band and crashed to $315 over the next five days. Let’s take a closer look with technical analysis.

Following the recent Litecoin price plunge, the Bollinger Band has started narrowing which shows decreasing volatility, As things stand, LTC sitting on top of the 20-day SMA, The MACD shows increasing bearish momentum so further downtrend is in the cards.

Prominent Analyst Is Bullish On These Three COins

Popular crypto trader Kaleo recently said that he has high expectations for Litecoin (LTC), Binance Coin (BNB), and EOS. Kaleo took to Twitter to share a chart indicating a massive price target for Litecoin at $2,000.

As for Binance Coin (BNB), Kaleo said that he sees the red-hot exchange token going on an explosive rally to the $1,000 level after it takes out a resistance of $680.

Kaleo has also got his eye on EOS. The trader compared the price action of EOS to that of Ethereum Classic (ETC) and says that the two have a striking similarity. From his point of view, EOS looks exactly like Ethereum Classic just before ETC rocketed skyward.

After ETC started to breakout, it accumulated beneath its previous ATH prior to shooting straight past it. The structure of the EOS chart looks extremely similar. I don’t expect it to stop in the low $20s when it moves out of its current range. 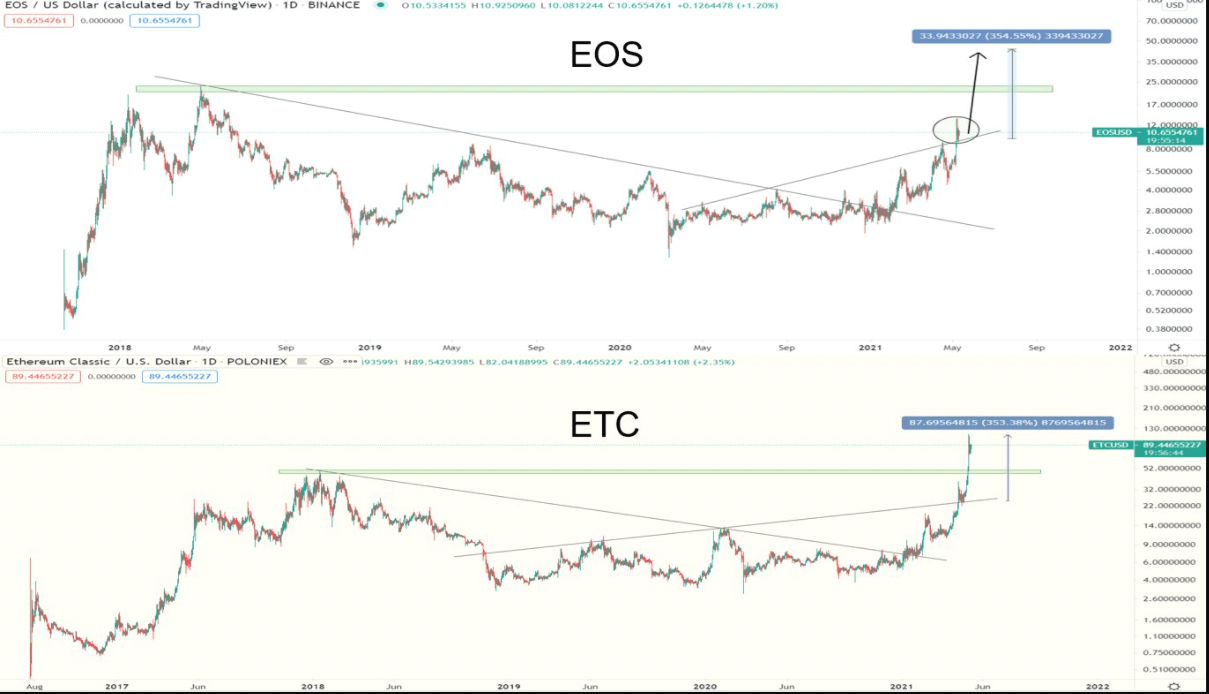 Following EOS’s retest of support after the initial breakout, Kaleo said that he stacked more as he sees more upside potential.

Added some EOS here. I see it as only a matter of time before it reclaims the highs set several weeks ago. Once $9.00 is breached, it should have a relatively clear path back to the old ATH of $23.00.

As of now, the Litecoin price will need to overcome the $350 resistance barrier. However, It seems like a big ask for LTC to jump by $37 to actually hit this level.