In this article, we will provide you with the complete details on the future price prediction of Litecoin (LTC).

Litecoin was created in 2011 as a fork of the original Bitcoin blockchain. The aim behind the creation of Litecoin was to create a miner-friendly cryptocurrency, which can be mined without using expensive and energy-intensive hardware. Today, Litecoin is one of the largest cryptocurrencies by market capitalization. It is a popular choice for cross-border transactions, thanks to its low transaction fees and high transaction speed.

Litecoin is a popular investment asset, so let us look at the Litecoin price prediction for 2021 and beyond.

Charlie Lee developed Litecoin in 2011, from a hard fork of the original Bitcoin blockchain, it is the seventh-largest cryptocurrency by market capitalization. Litecoin was created for the same reason that Bitcoin was created, to be used as a store of value and a decentralized payment mode.

Litecoin's developers saw Bitcoin's problems, primarily slow transaction speeds and regular bottlenecks due to the slow speeds. The cryptocurrency also had higher transaction fees. Litecoin's developers wanted to address both these issues, and Litecoin was created through a hard fork of the original blockchain. Litecoin is considerably faster than Bitcoin, taking 2.5 minutes to process a block, which means it can process 56 transactions per second.

Litecoin is mined the same way Bitcoin is mined. Miners solve complex mathematical problems and are rewarded for each new block that they verify. The current reward for miners is 12.5 LTCs. Litecoin also utilizes a technology known as SegWit (Segregated Witness). SegWit allows more transactions to take place within a block, resulting in quicker transactions.

Litecoin is among the first altcoins and was at a price of around $0.74 in March 2013. The price rose to about $3.5 in April 2013 and maintained the price level before gradually falling to $2 by October 2013. Litecoin's price increased significantly between October and December as the cryptocurrency rose from $2 to $26.34. However, it could not maintain this price and gradually fell to $15 by March 2014 and back down to $3 by December.

Litecoin started 2015 with its price at $1.80, and it stayed in this price bracket until May 2015, when its price rose slightly. By July, Litecoin's price had risen to $4.5, but the price fell again to $3.50 by August. The cryptocurrency stayed under the $4 mark until April 2016, when Litecoin finally broke the $4 mark. By June, the price had risen to $4.80 but fell back again. Litecoin stayed between $3.50 and $4.50 until March 2017. After this, Litecoin's price saw some serious movement in the market.

Litecoin started 2019 with an upward price trajectory, peaking at $126 in June 2019. However, the currency fell again, and by December, it was trading at $42. 2020 saw another rise and fall in price for Litecoin. The currency traded at $72 in February but fell to $44 by March. Litecoin's price stayed relatively stable until August 2020, when it rose to $59 but immediately fell back to $48 in September. Litecoin rallied again in October, and by January 2021, the price had risen to $146. 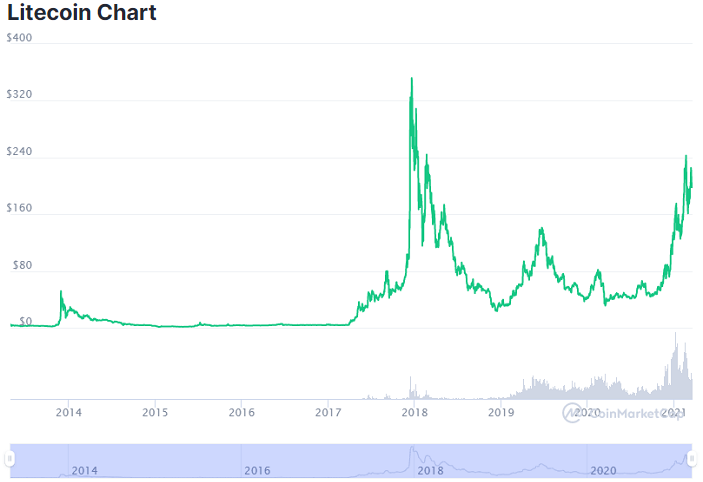 Let's take a closer look at Litecoin's price over the past few months. Litecoin experienced a relatively stable year in 2020, compared to the previous price volatility that the cryptocurrency has experienced. The currency traded at $53 in January, rising to $72 in February. However, the price fell and traded between $40-$50 until October.

Litecoin rallied spectacularly in October, keeping up with other cryptocurrencies, and broke through the psychological $50 mark. November saw Litecoin's price rise from $55 to $88, a 60% increase. Litecoin's price rose even further in December, and the currency reached a 52 week high of $123.76. Litecoin even outperformed Bitcoin during this rally, delivering more gains than the largest cryptocurrency.

According  to crypto analysts, the price of Litecoin will see an increase in 2021. The increase in the cryptocurrency's asset can be attributed to Litecoin's partnerships and integrations lined up for 2021. Litecoin also has an active developer community, and it is regularly updated with news about the cryptocurrency.

Litecoin is expected to give stiff competition to other cryptocurrencies in 2021. Most experts predict that the price of Litecoin could touch $300 again by the end of 2021.

The Litecoin price prediction for 2023 depends on how quickly the community adopts Litecoin. The cryptocurrency is already gaining traction among enthusiasts and experts due to its low transaction fees and fast transactions. It is also a very reliable mode of payment.

Most experts agree that Litecoin's price could go up to $450 by the end of 2023. However, LTC coin could also see some volatility in 2023, but it would have no bearing on the prediction.

Litecoin's halving will affect the cryptocurrency price in 2024, with the Litecoin price forecast predicting that the digital currency will reach the $490 mark in 2024.

Litecoin's price will see a considerable increase in 2025, according to most Litecoin price predictions. The halving will have generated more interest in Litecoin, and the currency will see more investment and trading, driving up the price of the cryptocurrency. Analysts predict that Litecoin's price will be around $600 in 2025.

Litecoin price predictions state that LTC could be trading at around $689 by 2030.

Here are Some Litecoin Price Predictions From Top Cryptocurrency  Analysts

Prime XBT has made a staggering claim that Litecoin could potentially reach $10,000 in 2025. Prime XBT's prediction is bold, and it could be interesting to see how the prediction plays out.

Previsioni Bitcoin believes that Litecoin will reach $479.56 by the end of 2021.

Cryptocurrencies are experiencing a bull run at the moment, with their price predicted to increase even further. According to the Litecoin price prediction, there is a lot of positive sentiment around the cryptocurrency, driving its price to record highs. With the integration of LiteBringer, the currency's price could spike sooner than expected. Investing in Litecoin could bring investors significant profits if the price keeps rising. However, it is important that you do your research before investing.

What Will Drive Litecoin Price in 2021?

Pros and Cons of Investing in Litecoin, Will It Be a Millionaire Maker?

How Much Will Litecoin Be Worth In 2021 And Beyond?

Several cryptocurrency experts predict that Litecoin's price will increase in the near future. according to crypto analysts, the price of Litecoin could cross $500 in 2025. However, cryptocurrencies are volatile, and it is difficult to predict the price of any currency accurately.

Is Litecoin A Good Investment?

When Did Litecoin's Last Halving Occur?

Litecoin's last halving occurred on 5th August 2019 when miners' reward was decreased from 25 LTC to 12.5 LTC.

What Are The Similarities Between Litecoin And Bitcoin?

Litecoin and Bitcoin have several traits in common. They are both decentralized cryptocurrencies that use the Proof-of-Work consensus mechanism. Both cryptocurrencies are also subject to volatility, which depends on factors like market sentiment, investor interest, and government regulation.

How Do I Purchase Litecoin?

You can purchase Litecoin from exchanges and platforms such as eToro wallet. You can register yourself, complete your KYC, and once the verification is complete, you can purchase LTC.