Between May 10 and May 23, the Litecoin price crashed from $388 to $145, losing a staggering 63% in its overall valuation. During this downward surge,  LTC managed to break below several key psychological levels such as the 20-day, 50-day, and 200-day  SMAs. Let’s take a closer look with technical analysis.

Litecoin Price Volatility On The Rise

Following this fortnight’s slump, the Bollinger Band had started expanding, which indicates increasing Litecoin price volatility. As such, the relative strength index (RSI) dipped significantly and was about to enter the oversold zone, before the buyers managed to take control today.

The reason why the buyers managed to take back control of the Litecoin price is because it looks like the buyers have identified the $150 psychological level to enter the market. Looking at the IOMAP, ~55,000 addresses had purchased more than 2.5 million LTC tokens at this level.

This metric calculates the median value of a transfer. Only successful transfers are counted. As per Glassnode, LTC Median Transaction Volume (7d MA) just reached a 8-month high of 0.649 LTC. 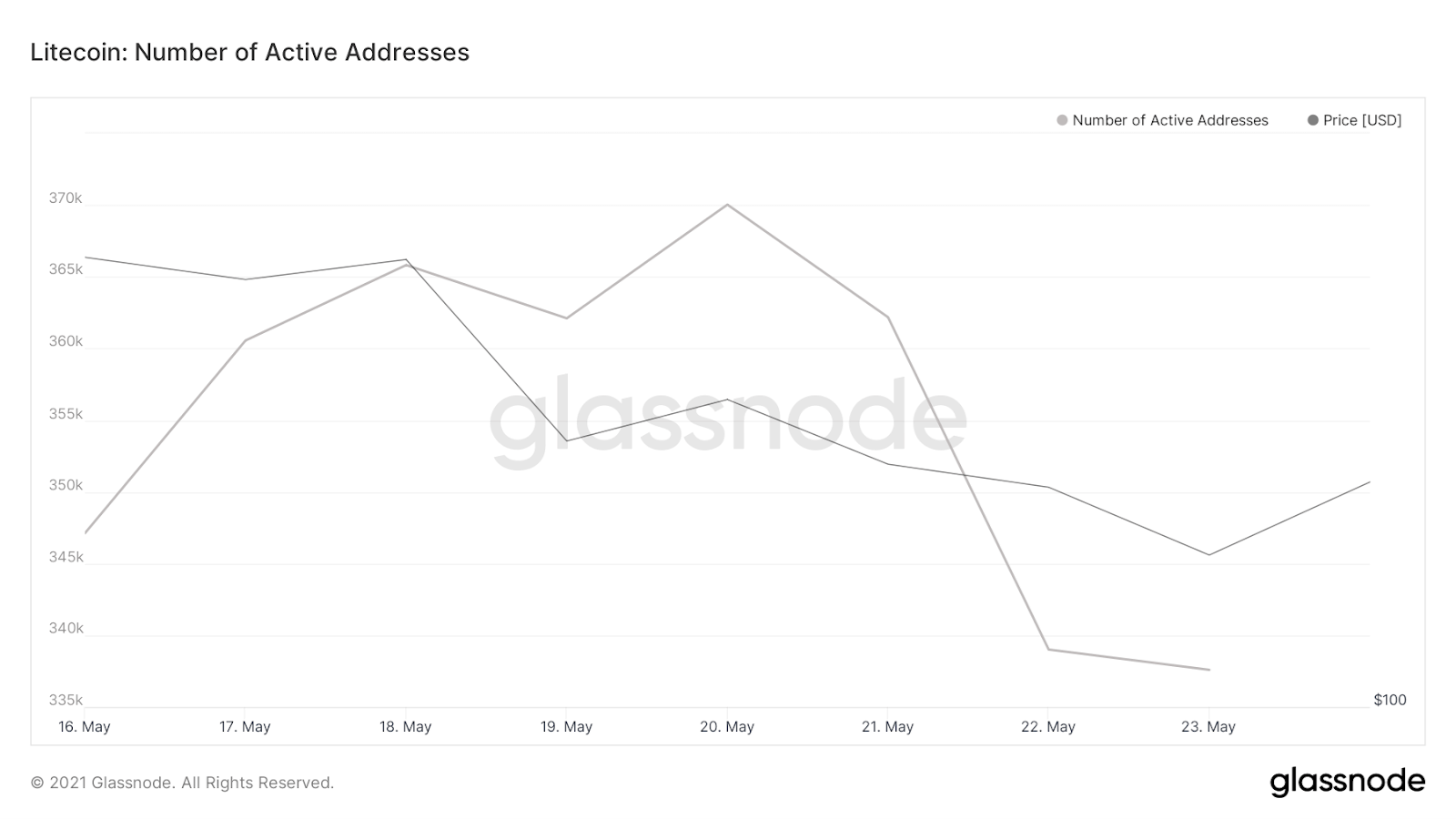 However, over the last week, we can see that the number of active addresses interacting with LTC has dipped considerably.

Coin Bureau On Litecoin. Is It Underrated?

A famous crypto trader known as Guy recently analyzed Litecoin (LTC) and whether it is properly valued in the current market. Following the recent crypto market crash, LTC is currently resting at around a $14 billion valuation.

Guy said that Litecoin, which has been around since 2011, “has not just survived, but thrived” since its advent. According to them, Litecoin’s recent bullish price action before its crash back down to the $200 range, may be fueled by institutional demand as Grayscale reportedly acquired around 80% of the mined Litecoin (LTC) supply this past February.

Litecoin was designed in such a manner that it could become more decentralized than Bitcoin. Guy said:

Litecoin uses a special proof of work (PoW) consensus mechanism called Script. Script was meant to make it possible to mine LTC using a regular computer. This would make the Litecoin blockchain more decentralized as anyone would be able to participate on the network.

This is in contrast to Bitcoin’s Sha-256 mining algorithm which was only minable using specialised computers called Asic.

The analyst also referenced that back in 2017, Litecoin founder Charlie Lee sold all of his Litecoin holdings. The move was criticized by many but Lee considered the move crucial to Litecoin’s future success.

In practice, Litecoin seems to be lacking in more than one department. For one transparency has not been its strong suit and there’s no question that Charlie Lee selling his Litecoin back in 2017 was bad optics. As hard as the Litecoin developers are working, it seems like a slow pace of development, though it has still been much faster than Bitcoin.

The buyers will now determine the fate for Litecoin price. If the LTC gathers enough momentum and manages to flip the 200-day SMA from resistance to support, it will be able to reverse the current bearish sentiment. However, failure to do so will break the digital silver below the $150 mark and push it down towards the $100 psychological level.