Litecoin Technical Analysis: LTC Drops After Failing At The 20-day And 50-day SMAs

The Litecoin price had a bullish resurgence, going up from $170 on March 26 to $195 on March 30, gaining almost $25 in its overall valuation. However, LTC has now faced a major resistance at the 50-day and 20-day SMA confluence.

Litecoin has dropped from $195 to $190, as the time of writing. However, despite this drop, the overall sentiment around LTC has been pretty bullish. Over the last two days, the parabolic SAR has shifted from negative to positive, which reflects the market sentiment.

The IOMAP shows moderate resistance barriers on the upside at $210 and $220. On the down side, there is a robust support wall at $185, wherein 158,000 addresses had purchased nearly 3.45 million LTC tokens.

The total volume of Litecoin transactions has exceeded a staggering 20,000,000,000 LTC, according to Glassnode. The number of receiving LTC addresses (seven-day MA) has hit a three-year high of around 13,000. 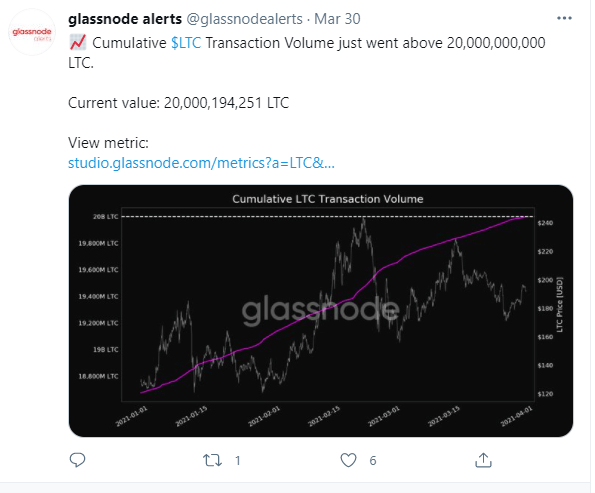 Meanwhile, Binance has added LTC trading against one of the most popular fiat currencies, GBP. The largest crypto exchange by volume also trades Litecoin against other fiat currencies such as EUR, USD, RUB, BRL.

Since 2021 began, Litecoin has not had any significant price action. Having started the year at the $129 level, it reached a peak of $239 on February 20 and has been trading in a range below $200 since.

Litecoin Price is Expected To Reach These Levels

Litecoin price will probably rebound and attempt to hit the 50-day SMA again. Do note that the 50-day SMA has crossed above the 20-day SMA to form a bearish cross pattern. LTC will need to close a candlestick above these curves to negate the bearish effects.