Litecoin Technical Analysis: LTC freefalls but is it a sleeping giant?

Litecoin is in a very precarious state as it is currently in the middle of a bearish rally. After failing at the $90-mark, the “digital silver,” has dropped to $71.50. As of now, the price has found support at the 50-day SMA. However, long-term indicators show that LTC may soon explode up. Let’s do some technical analysis and take a closer look at the price action.

As one can see, the price is trending in a downwards parallel channel. After failing at the $90 resistance line, the price has managed to break below the critical $85 and $75 levels, flipping them from support to resistance.

The moving average convergence/divergence (MACD) shows that overall market momentum is becoming increasingly bearish. This could potentially prompt the price to fall down to the 200-day SMA ($55).

When we observe the 4-hour price chart, we get a similar reading. However, the bulls can find respite at the $65 support line. Previously, on November 27, the buyers had used $65-support as a launching pad for a renewed assault.

However, as with the daily chart, the 4-hour chart also shows that the market momentum is becoming increasingly bearish.

Long-term price explosion on the cards?

However, it’s not all doom and gloom. Turns out that the long-term price projection of LTC is exceedingly positive. As we mentioned before, the monthly price chart for LTC/USD has formed an Adam and Eve pattern.

According to Investopedia, "Adam and Eve" is a secondary reverse pattern with different representations. The ideal version resembles a double top with the particularity that the second maximum is rounded, smoother, slightly decided. If this pattern is realized, LTC should break past the $120 resistance and reach the $230 level. That’s a 165% boost in the overall valuation

To add further credence to the bullish outlook is the following analysis by “CRYPTOâ‚¿IRB,” which has noted a significant bullish divergence in the LTC/BTC chart. 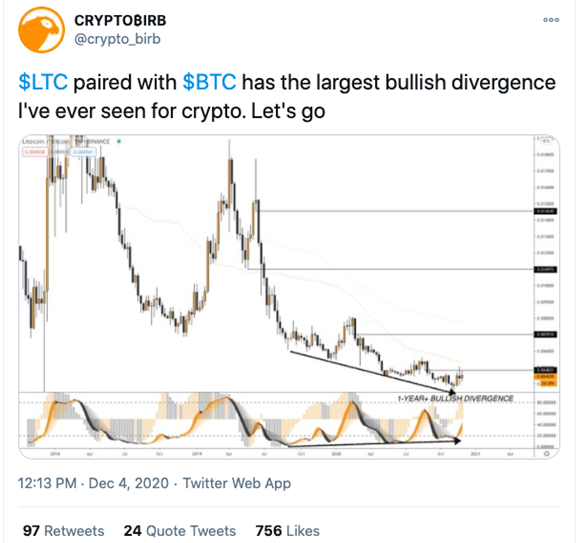 A bullish divergence occurs when prices fall to a new low while an oscillator indicator such as rsi fails to reach a new low. This demonstrates that bears are losing power and that bulls are ready to control the market again. A bullish divergence marks the end of a downtrend.

All these indicators show that the current drop is a temporary pullback and the overall, long-term outlook is bullish.

Bitwise Asset Management has announced that its “10 Crypto Index Fund” is now available to US investors as a public-traded cryptocurrency index fund. The fund’s placement on over-the-counter (OTC) markets like OTCQX lets brokerage services like Fidelity and Schwab offer these shares. Litecoin is one of the 10 cryptocurrencies that make up the Bitwise 10 Crypto Index Fund (BITW).

The start of public trading for shares of BITW will make it significantly easier for financial advisers, family offices, individuals and institutional funds to allocate to space. We believe the fund offers a robust, one-stop solution.

According to Bitwise, 10 Crypto Index Fund is the first cryptocurrency index fund available to investors through traditional brokerages such as Schwab and Fidelity.