The buyers have edged out the bears in the early hours of Tuesday. However, the overall market sentiment appears pretty bearish. Let’s take a closer look with technical analysis.

LTC flashed a sell signal in the form of a green-nine candlestick in the TD sequential indicator. After flashing this sign, the price dropped from $170 to $140. In the process, the digital silver fell below the 20-day SMA. The MACD shows increasing bearish momentum. As such, a further drop is expected.

It looks like the price may drop to $130 before it encounters healthy support. A further break below that takes LTC down to the 50-day SMA ($110). It seems like Litecoin is facing extreme resistance at 20-day SMA ($140) on the upside. Previously at this level, 53,000 addresses had purchased 3.36 million LTC.

When we shorten the time frame to 4 hours, we can see that the price has faced repeated rejections at the $140 resistance barrier. Such repeated failures could drop the price to the $130 support and then to the 200-bar SMA ($120). The 50-bar SMA has crossed over the 20-bar SMA to form the bearish cross pattern.

Ripple-backed Project To Do Litecoin Airdrop

Ripple-backed Flare Network (FLR) recently announced that it is adding support for Litecoin (LTC). An FLR airdrop to Litecoin users is in the pipeline. 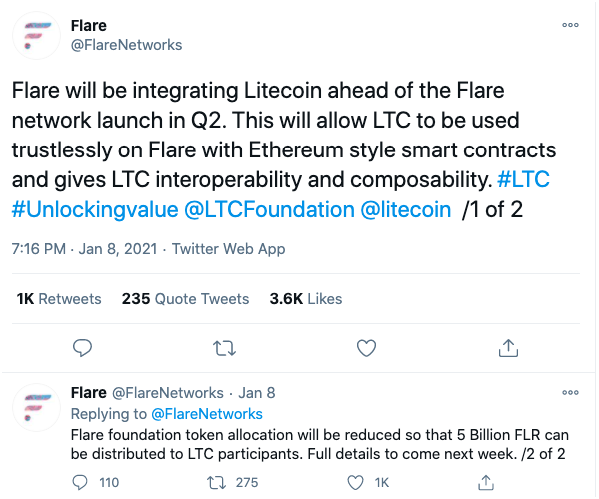 Following the upcoming token drop (Q2, 2021), Spark, the token on the Flare network, will be used for governance and collateral. The company plans to bring smart contracts to Ripple’s XRP. Previously, Ripple was seen as a vehicle for funds transfer, and Flare has claimed that Spark tokens will add value.

The company is naming their FLR tokens XFLR tokens (for XRP) on their site. There may be LFLR tokens for Litecoin. However, it might not stop there. Flare could add support for other digital currencies as well. The company noted that it might support other networks in the future. Flare aims to facilitate smart contracts on protocols, which do not have them built-in.

The bulls have a straightforward task. They must take over the $140 resistance barrier to ensure that they can retake complete control. The bears must break below the $130 support wall to continue being in full control of the market.