The Litecoin price continued on its upward trajectory as buyers pushed the price past $260. LTC is up by over 2% during the current session and could push up further. LTC has been bullish since Sunday when the price recovered from a bearish end to the previous week. LTC pushed up by over 13% on Monday and then by over 14% on Tuesday to settle at $262.03. The price pushed up further during the current session, with the price already up to $268.

The Litecoin price, in line with the prevailing bullish sentiment, had started the previous week in the green, with buyers pushing the price up by over 3%. LTC moved higher on Tuesday, going past $200 after registering an increase of 1.60%. On Wednesday, the price continued to push up as LTC rose by 3.17% to settle at $207.37. However, after reaching this level, LTC fell in the red as the price dropped by over 2%, falling to $203.09, before another drop on Friday pushed the price below $200, as LTC settled at $199.09. 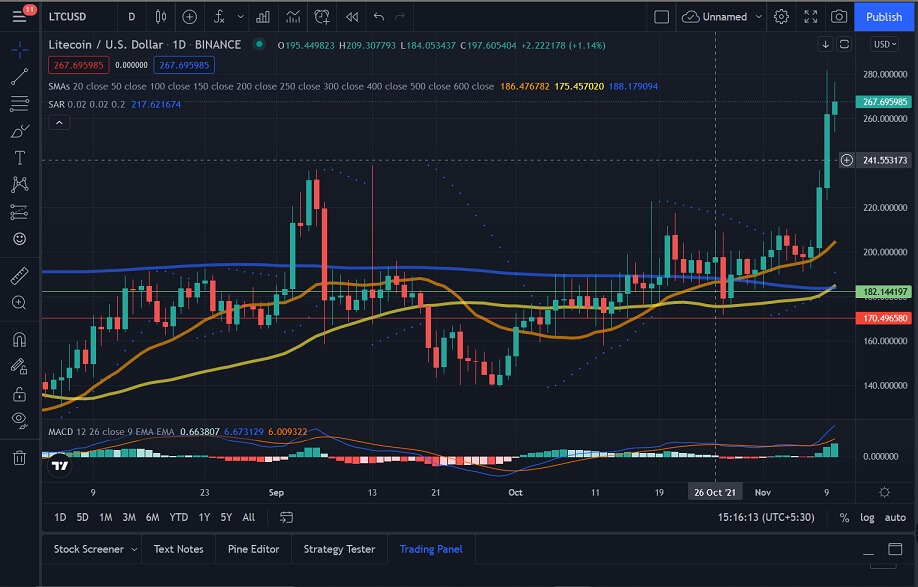 After ending Friday below $200, the Litecoin price continued to drop on Saturday as it slipped by 0.65% and settled at $197.80. However, the price recovered after reaching this level, as LTC pushed up by 2.20% on Sunday, ending the weekend on a positive note. The current week started with LTC extremely bullish, as buyers pushed the price up by over 13%, settling at $229.01. Tuesday saw the price continue to push up, as LTC registered another increase of 14.42%, with the price pushing up to $262.03. The current session sees the price at $267, with buyers in control. With the Parabolic SAR and MACD both bullish, we could expect the price to push up further.

Looking at IntoTheBlock’s IOMAP for the Litecoin price, we can see that LTC has strong support at around $232.16. At this price level, over 59,000 addresses have bought over 790,000 LTC.

The 4-hour Litecoin price chart shows us that after pushing up to $207.61 on the 3rd, LTC dropped to $200.56, where the 20-bar SMA was acting as support. The price dropped further from this level, falling to $197.94, where the 50-bar SMA acted as support, propping up the price. However, LTC was back in the red after a marginal recovery as it slipped below the 50-bar SMA and settled at $193.61. LTC made a strong recovery from this level, as the price rose to $229.59 and then to $267.21, before dropping to $257.25 and then rising to its current level of $266.08. We can see that the Parabolic SAR has flipped to bullish, and if the price continues to drop, then we could see the MACD also flip to bearish. 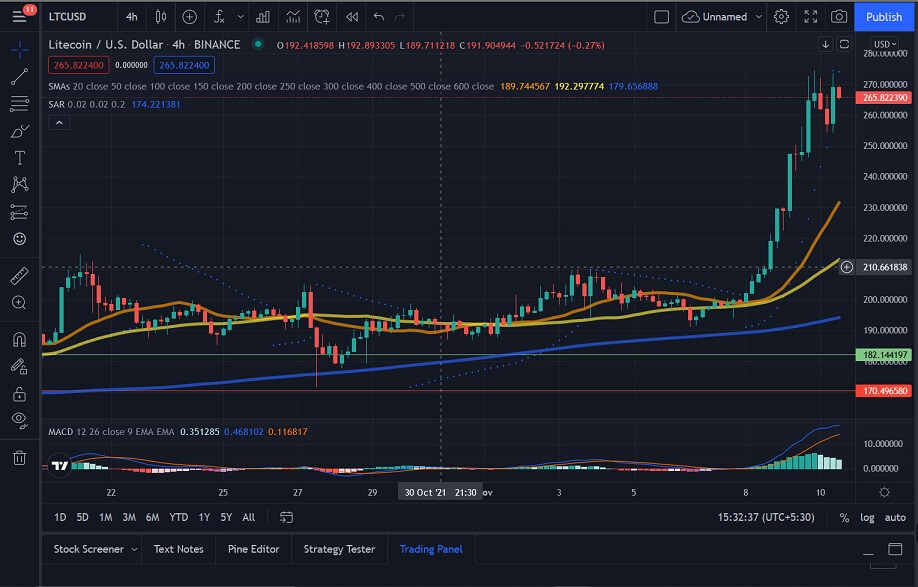 Looking at the Litecoin price chart, we can see that LTC has been extremely bullish since the start of the week, with the current session seeing the price at $265. If the current sentiment persists, then LTC could push to $270, but with LTC having dropped marginally, we could also see the price drop to $260 if sellers can reverse the trend.